Why Is Your Beagle Out Of Control?

Before you can stop your Beagle’s manic behavior, it’s important to know why they’re out of control in the first place! Here are the most common reasons.

Dogs, regardless of breed, are creatures of habit. They enjoy knowing what will happen at a specific time of day. Most breeds will whine if they aren’t fed on time, for example.

And while they’re routine-lovers, they do need adventure every once in a while. However, they may not be able to keep up with and adjust to frequent changes in routine. These frustrations will most likely be expressed in destructive behavior from your Beagle.

It’s also possible that the inverse is true: a lack of change is tedious as well. Beagles are used to having a purpose, so without it, they can quickly become bored. When your dog is bored, it will try to make its own “fun” by figuring out how to occupy itself. And the chances are “this fun” is going to be unruly behavior that makes it feel like your Beagle is out of control.

Lack of social connection is another factor that might cause a beagle to lose control and run amok. Beagles aren’t only good workers; they’re also very social dogs that love meeting other dogs and people. However, they have the potential to be unruly around new people or pets if not properly socialized. Because of this, it’s crucial to begin socializing training as soon as possible.

Beagles may not be the smartest dogs, but if you’re not training them correctly, then it’s no wonder they’re going to be unruly. So make sure you’re following a good training program or going to puppy classes to make sure your beagles are being trained properly.

They’re Being Cooped Up For Too Long

No dog, no matter what breed, will like spending a lot of time in a small cage or on a leash. However, beagles exhibit this trait more clearly. You should give your beagle plenty of space and freedom to run around to keep them happy.

While temporarily tethering your pup might be beneficial in some situations, leaving them alone for an extended period of time can lead to undesirable or even dangerous behavior.

An Illness Or Injury That Isn’t Visible

Take your dog to the vet first before making any changes to your regular routine or training methods, especially if your beagles out of control sprang out of nowhere and didn’t develop over time. Whenever your pup is in pain or sick, its aggression may increase as a protection strategy. The dog’s odd rage might be a symptom of his deteriorating health.

Another reason that your Beagle is so out of control is that they’re so young. Puppies are notoriously known to be naughtier, and fortunately, with time, they should just grow out of this on their own. However, as a side note, you should also be aware that as beagles become seniors, they may get dementia, making them naughty again.

Lastly, the dog may have received an incentive for misbehaving. Just like with positive behavior reinforcement, a dog will always repeat new actions that reward him more. For example, if you shout at your Beagle for chasing a cat, you’re still giving them attention. So in order to get a reward (your attention), it wouldn’t be uncommon for them to chase another cat. 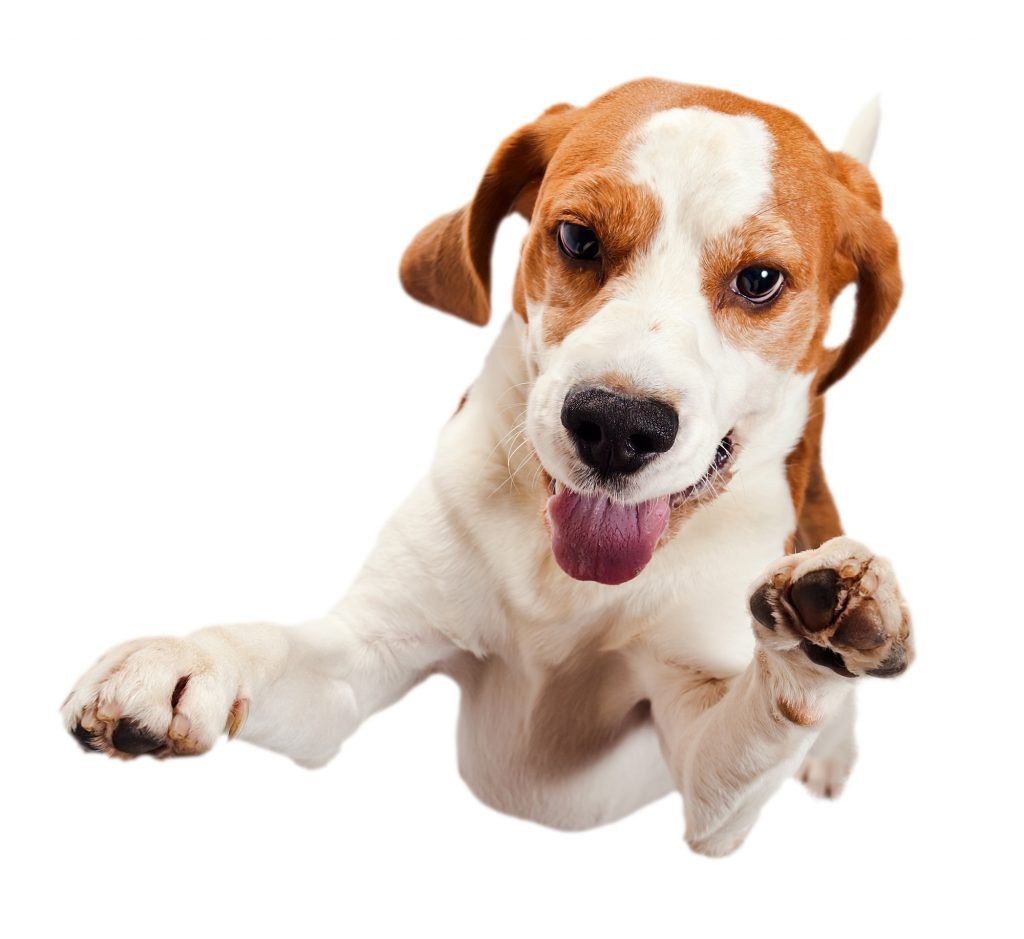 Tips For Calming Down An Excessively Excited Beagle

A frantic dog can be difficult to calm; however, not impossible for beagles. They are capable of going into “play mode” and hurt somebody if you don’t train them correctly. And if you don’t know what you’re doing, you might end up getting hurt while your dog thinks it’s a fun rough-and-tumble game. Here are a few suggestions to help you handle your hyper pup.

Find Out What Causing Their Hyperactivity

It’s impossible to treat anything if you don’t know what’s causing the problem. Pets are included in this. As a pet owner, your job is to figure out what your pet is doing, why they’re doing it, and how to stop it or limit the likelihood of it happening again. Knowing what triggers aggressive conduct makes it more difficult to deal with the problem.

Make Sure You’re Expending Their Energy

Beagles require mental and emotional stimulation as much as physical stimulation in order to be happy and avoid becoming out of control. As well as physical exercise, you need to make sure you’re giving their brain the stimulation it needs as well. So give your beagle tasks that are simple yet gratifying so that they can engage their muscles and brains at the same time.

Increase Your Work Or Exercise Routine

The more your beagle exercises, the more tired they’ll be, and the less likely they are to be out of control.

It’s may even be necessary to try and squeeze more exercise into your beagles routine every day. But this doesn’t just have to be talking; it can also be playing with them. However, remember that fatigue can sometimes lead to crankiness as well, which could result in bad behavior. So it all boils down to striking a healthy balance between working and relaxing time each day.

Spend More Time With Your Pup

In the end, your dog’s hyper behavior may also be due to a lack of interaction with you. If you leave your dog alone for a lengthy amount of time, it may start to become more and more out of control. Remember, dogs are sociable animals and do best in groups.

So go for plenty of walks or play with your pup more often. Fetch is a great workout and training game since it’s so high-intensity. You should also try to get them to play with other dogs if you can.

Keep Calm And Carry On

Finally, when dealing with your pet, be patient. They are loyal and loving, but they can also be a pain to train.

Changing a dog’s behavior is a long-term process that takes time and effort. When it comes to teaching your dog, there will need to be some patience and perseverance on your part. Rather than giving up on your Beagle too early, take a close look at its training to determine if you’re doing anything to hinder its growth.

What’s The Best Way To Train A Beagle?

Beagles aren’t the easiest dogs to train because they’re quite stubborn and slow learners. But when they aren’t properly trained, they might become overconfident and even slightly aggressive. So it’s critical to earn your dog’s trust if you want to properly train them and reduce your Beagle’s tendency to be out of control.

Check Your Behavior Around Your Pup

Just like any other form of change, you might consider looking at your behavior first. Are you neglecting your dog by not spending more time? When is the last time that you play with your Beagle? Have you been an aggressive owner or have done something in the past that can cause your pet to distrust you?

Beagles are smart and sensitive beings. They can easily pick up their owner’s mood and act upon it. If you’re always angry or aggressive around them, they can start acting aggressively as a defense mechanism around you. Start building bonds with your dog more to better understand their temperament.

Even though it may seem contradictory, ignoring an out-of-control beagle is preferable to punishing it. Dogs would often prefer repeating a certain behavior if they’re rewarded for it. As long as you ignore your dog’s poor behavior, he’ll quickly learn which actions are rewarded and which aren’t.

Dogs can pick up certain bad behaviors depending on their conditions growing up. If your Beagle is a rescue, you may have to wait a while to learn his quirks. Be patient, and don’t get frustrated if their behavior doesn’t change right away.

Believe it or not, punishing your Beagle is less effective than using positive reinforcement. If you concentrate on the positive aspects of your dog’s behavior, your Beagle will do the same, avoiding undesirable behaviors that aren’t worth the effort. Praising your dog for good behavior will help it associate that behavior with potential rewards.

Just like ignoring bad behaviors, you need to be consistent in focusing on your dog’s good behavior. An inconsistent training will not only confuse your dog, but it will also make its reaction unpredictable. You can even attempt to teach your dog some basic commands if you do it correctly.

When faced with a threat, a defensive dog is likely to respond aggressively. This aggression is rooted in the fear or phobia it’s acquired after a past event. Be careful around your Beagle if it is in high alert or protective mode. This reaction is common in dogs that have been abused by their previous owners.

Obedience training can help a lot in this type of situation. It will help your dog get acquainted with you, and they’ll then learn to trust you. Besides, obedience training is also a great way to exercise your dog and stimulate its mental capabilities. Beagles love to work their noggins now and then.

Give Them A Proper Routine

And last but not least, a dog will likely not act aggressively if it follows a healthy and stimulating routine. Following a routine can comfort a dog, making them happy, contented, and most of all, calm. Not to mention that certain activities can also make them use up all their pent-up energy.

If you’re planning to change their routine, make sure to implement it as slowly as possible. Make small changes over time, and let your pup adapt to the changes. Even small changes can throw the dog’s life balance when done poorly.

If you liked this article, make sure you check out the rest of the website! Otherwise, have a great day!