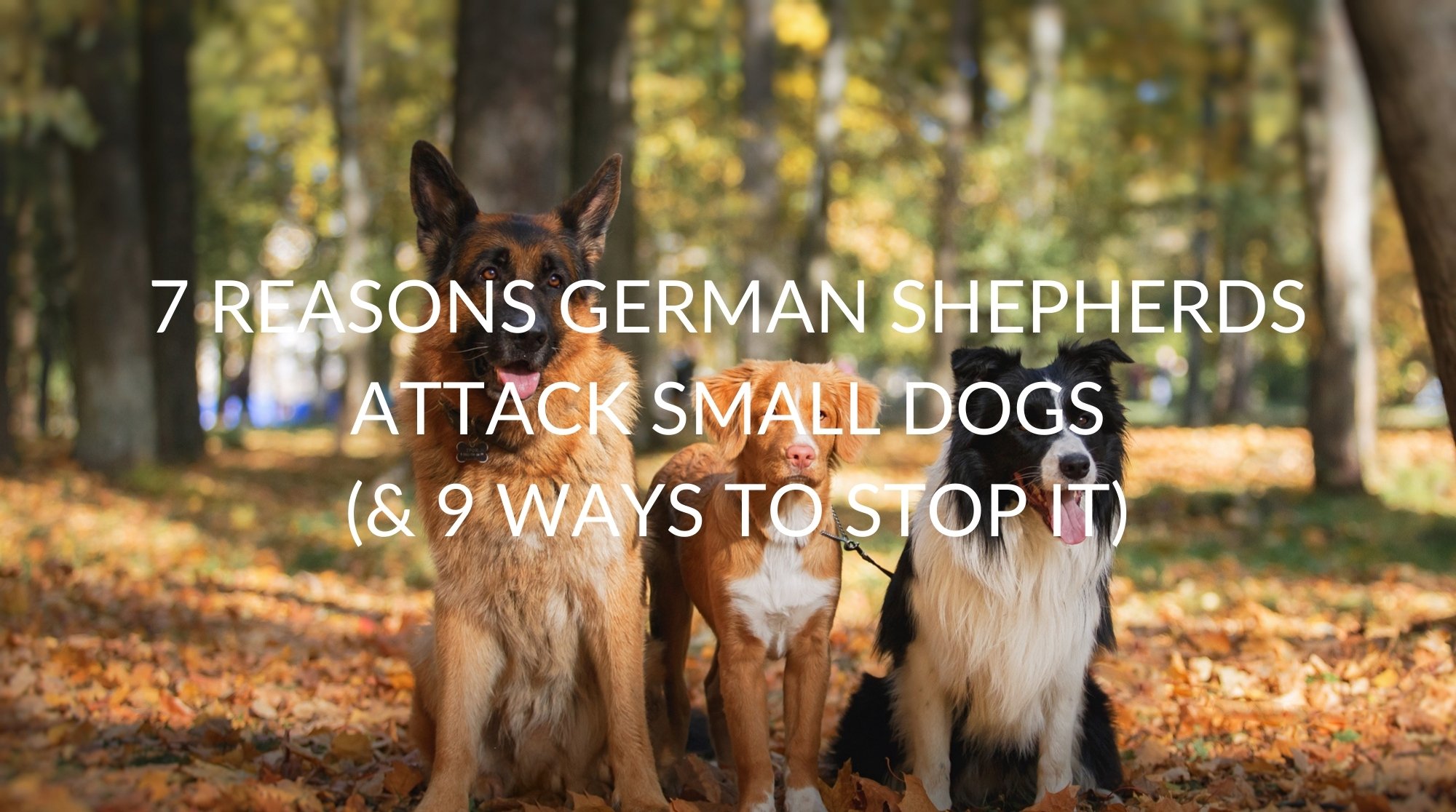 What Should You Do If Your German Shepherd Attacks A Smaller Dog?

If your German shepherd attacks a small dog again, according to the PDSA, you should do the following:

What Are The Common Signs Your German Shepherd Is About To Attack?

Fortunately, if you learn your german shepherd’s body language, it will help you spot behavior that could show they’re about to attack again. Some common behavior to look for include:

Why Did Your German Shepherd Attack A Smaller Dog?

If your German shepherd attacked a smaller dog, then you may be asking yourself why it happened in the first place.

If your German shepherd was never socialized properly, then this may be the reason they attacked another dog. Without interacting with other dogs as they grow, they may find it hard to read other dogs’ body language. Meaning they don’t know what’s a threat or not and how to act appropriately.

There’s a reason german shepherds make such good police dogs and guard dogs. And that’s because they have an exceptionally high prey drive. If they see something moving the way a prey animal would (such as a small dog), it could trigger their prey drive.

Perhaps your german shepherd attacked the smaller dog because they were being territorial. If they felt like the smaller dog was a threat to their territory, you or them, then they may have attacked to protect what they thought was theirs.

If you’ve kept your german shepherd cooped up all day, then they may be extremely bored or energetic. Over time, this can turn to frustration which they’ll take out on other dogs. Remember, German shepherds are incredibly active breeds, so you need to make sure they’re getting at least 2 hours of exercise a day.

They Became Too Excited

When german shepherds play, they can become extremely excited and highly aroused. When this happens, harmful playing can suddenly set off their prey drive, especially if a smaller dog triggers it.

On the other hand, if the other dog becomes too excited, then your german shepherd may have lashed out to get them to calm down.

If your German shepherd is normally kind and peaceful but suddenly lashed out, then it could be a health problem that hasn’t been diagnosed yet. For example, if your german shepherd was in pain, or they feel sick, they’ll be a lot quicker to snap in a bid to defend themselves.

Lastly, your german shepherd may have attacked in an attempt to assert dominance over the other dog. You may also notice that your german shepherd was displaying other dominant behaviors before the attack, such as becoming unresponsive to you and trying to put themselves in a higher position. How To Prevent Your German Shepherd Attacking Small Dogs Again

Depending on the severity of the attack, there are things you can do to prevent your German shepherd from attacking again. Such as:

Seeking Advice From A Vet

If your German shepherd has already attacked and you have successfully removed them from the situation, the first thing you should do is seek the advice of a veterinarian or a professional. They’ll be able to provide you with sound advice on what to do next based on your german shepherd’s particular circumstances.

You may also use small dogs to form positive connections in your german shepherd’s mind. To achieve this, start with little rewards and work your way up. Start by praising them for not responding aggressively when they see a dog. Then when approaching a dog without being hostile, then going past a dog, and so on. Over time you’ll start to build a permanent positive association with your german shepherd.

Desensitization training is another excellent option. To achieve this, let your german shepherd view other dogs from a distance, but not close enough for them to attack, and reward them when they behave appropriately. Once they’ve become used to it, gradually move the dog closer and closer until they’re comfortable around other dogs.

Training your German shepherd is another excellent alternative, regardless of whether or not they’re attacking another dog. Positive reinforcement is one of the best methods since it rewards good behavior rather than penalizing poor behavior, which is more successful and strengthens your relationship with your dog.

Unfortunately, sometimes for the safety of your dog and the dogs around them, the best thing you can do is muzzle them. You can pick muzzles pretty cheap off Amazon. Just make sure you’re not leaving them on your german shepherd for too many hours in the day.

How To Prevent A German Shepherd Attacking A Small Dog In Your House?

You may be wondering what you should do if you own a small dog, and you’re scared your german shepherd is going to attack them. Fortunately, as well as the points listed above, you can also try the following.

If your German shepherd is known to resource guard, the worst thing you can do is feed them with a smaller dog. When it comes to dinner time, make sure you’re keeping your german shepherd and other pups completely separated.

You should also make sure you’re always supervising their playtime. Don’t leave them with toys as the germans shepherd may get possessive and try to take a toy by force.

Make Sure You’re Giving Them Both Enough Attention

Seperate Them If You Have To

Lastly, you may need to separate them permanently if you have to. You use stairgates to keep them separate from each other or keep them in separate rooms where the aggression will be unable to continue.

As well as all the things listed above that can make sure your german shepherd doesn’t attack another dog, there are also some things you definitely want to avoid doing as well.

You should never under any circumstances hit your dog unless it’s absolutely vital. If you do, not only are you going to build resentment in them towards you, but if they’re attacking another dog, they may end up turning and attacking you instead.

If you’re shouting or making direct eye contact with your golden retriever, you may end up stirring them into more of a frenzy and make the situation a lot worse. Instead, try to distract them as best you can.

Don’t Let Them Off The Leash In Unfamiliar Places

If your German shepherd has previously attacked another dog, only allow them off the leash in places you are familiar with. And even then, you should keep them muzzled just in case.

You’ll always know where your dog is if you need to recall them.

Can German Shepherds Get Along With Small Dogs?

Generally speaking, it’s entirely possible for german shepherds to get along with small dogs, especially if they’ve been socialized properly. However, when you are choosing which dogs to pair them with, you don’t want a dog that’s extremely excitable to active such as jack Russell’s or fox terriers, as they may end up triggering a german shepherd’s prey drive.

As you can see, just because your german shepherd attacked a smaller dog doesn’t mean you need to give up on them just yet. If you stay responsible as an owner, you can make sure the same occurrence doesn’t happen again. And remember, the moment your german shepherd attacks another dog, you should take them straight to the vets to find out what the best course of action is for their particular situation.