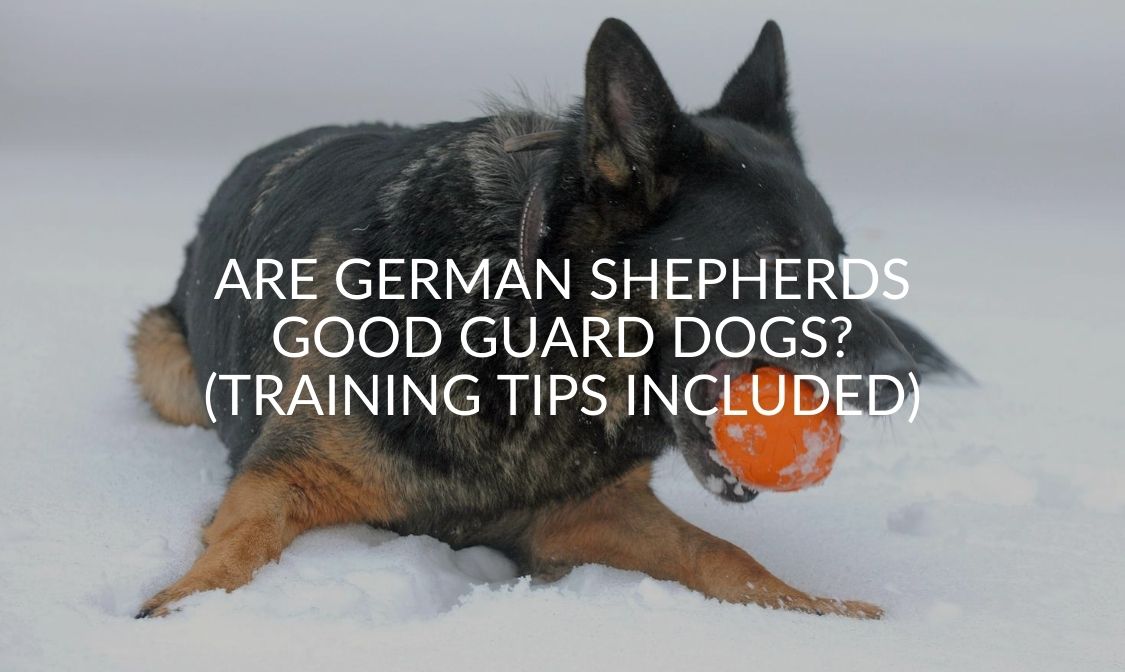 If you are looking for a breed of dog that is kind, but also very protective, most people suggest that the German Shepard is the popular dog of choice. They are kind, gentle creatures, but will protect when there is danger. There are some, however, that don’t think they are as good as people say. Which brings us to the topic, Are German Shepherds good guard dogs?

Let’s now go over just a few reasons why the Shepherd is one of the top guard dogs and what makes them so good.

If given the proper training and care, the German Shepherds are quick and fast learners. They enjoy making their owners proud of them. If you are thinking about getting one, the best time to is when they are young, so your bond can grow with them.

If you have ever heard a German Shepherd bark, you know that it can make you jump back. It is another reason why they are excellent guard dogs; they have a very intimidating bark. Their loud barks make them very useful for when intruders try to break in.

They Are Protective of Your Kids

They Have A Great Sense of Smell

If you have ever seen a Shepherd working with the police, it is because they have a great sense of smell. They can sniff out things and find things that sometimes can be hard for humans to spot. It is once the reason why they are in the police force.

They Are Very Confident Creatures

It is very hard to scare a German Shepherd as nothing seems to scare them. They are very confident creatures that you shouldn’t think twice over. They are very protective of their families and will make sure others know it too.

These are just a few reasons for what makes them so good, but there are plenty of other reasons as well. German Shepherds are just great all-around for being guard dogs.

You may be thinking which one would be a better choice for your family; is it the male or female German Shepherd? Let’s look at the benefits of both.

Male German Shepherds tend to be protective over their surrounding area. It means if someone were to try to come in your yard, they would probably be at the edge of the yard barking at them to go away. They are more territorial than anything.

Females, on the other hand, tend to be more protective over the family. It means that if someone was to break in, they would be standing in front of you, guarding you. It is probably because of their motherly instincts. This is not to say a male wouldn’t be protective; just that females are more protective over family members.

After doing some research and looking at what others have to say, females are the better choice out of the breed.

(Find out what to do if your german shepherd barks at night.)

How to Train Your German Shepherd to Be A Guard Dog?

As stated above, German Shepherds are very intelligent creatures. However, they do still have a temperament that does need training if you are going to adopt one. As with all dogs, training them when they are young is the best way to go as they will want to learn things you have to teach them. If you want your German Shepherd to a good guard dog, there are plenty of ways to train them.

Taking them to a class when they are young, is the first start to helping your German Shepherd become a guard dog. During the class, they will not only be around other dogs but around other people too.

Classes also help train them on how to act around other people. In addition, you could also get some helpful tips from the teacher about what to do at home. Every moment is a teaching moment, so make the most of it when training your German Shepherd.

Socialize Them When They Are Young

Bringing them around other people when they are young, especially with family, helps them not to be so aggressive when you are out walking. They will start to understand that not everyone is a threat to you. It will also help them to be more friendly around your kids as your shepherd grows up.

(find out more about socializing your german shepherd.)

When training at home, never hurt or abuse them. It will make them afraid of you, and they may end up hurting you as they get older. It is your responsibility, as the owner, to make sure they have proper training.

When you do train them, don’t yell; talk in a stern voice, but never yell at them. You want them to know when they did something wrong, but you do not want to abuse your dog when doing so. It can also confuse them as they won’t understand.

Give Rewards When Your Shepherd Does Good

When they do something correctly with or without being told, give them a little reward. Maybe a nice treat or a belly rub will help teach them that what they did was a good thing, and it will help them remember to do that in the future.

They need the correct guidance while they are being trained; rewarding them is a great way to show them that they are doing exactly what they are supposed to do. Once they have mastered what you are trying to teach them, they will begin to do it without any thought about it.

Teach Them to Bark on Command

German Shepherds tend to bark a lot if they are unsure about what is going on. Teaching them to bark on command is an excellent way to also keep them from barking all the time. Training them with the word ‘Speak’ will let them know it is okay to speak.

Remember to reward them if they do it correctly. You may also want to teach them to stop barking as well if they hear something outside. Try teaching them with the word ‘Quiet’; if your dog listens immediately, give him a reward.

In addition, you also might want them to bark if someone comes to your house. Just be sure they don’t continuously do it in public as they may be cautious of everyone. Be sure to help teach your dog the right and wrong times to bark.

(You should read the following articles if your german shepherd is barking at night, barking at other dogs, or barking at strangers.)

By doing this, it will help your German Shepherd get used to the surroundings. It will also help them know who is around. Make sure you teach them not to bark at everyone that they might think of as a threat. It would be a good idea to use the ‘Quiet’ command on walks. Be sure to bring treats with you to reward them if they do well.

Give A Practice Scenario

When doing a practice scenario, make sure your German Shepherd has a collar and their leash on as not to have any accidents happen. Ask a friend to pretend to break in while you are holding on to your dog tightly.

Let your dog bark when your friend comes in, so they know that something bad is happening. However, once your Shepherd does what they are supposed to do, tell them ‘Quiet,’ and give them a treat. Be sure to make it known to your dog, however, that your friend is not a threat.

Another idea is to take them to a class that allows them to “attack” an intruder. These people are usually skilled and padded up to make sure there is no injury. They will teach you the commands to attack and release. These are excellent ways to make sure your dog knows how to be a good guard dog.

Be sure to have its temperament under control before doing any scenarios like these; because you wouldn’t want them to do this to everyone they saw on the street.
That is why training them when they are puppies is the best way to go about training them to be guard dogs.

Get Them Used to Other Dogs

As stated above, getting them used to other dogs helps them not to think everyone is a threat to them. Introduce them to other dogs often when they are puppies, like going to parks, pet stores, etc. Teaching them that other dogs aren’t bad is also very important during the time you train them.

Train Them Not to Jump on People

Sometimes German Shepherds may jump on others because they are excited to see them, or they don’t trust them. Be sure to teach your Shepherd the ‘ Down’ or ‘Off’ Command. It will help them not to jump on people that are coming to visit you, as well as people who you happen to see on the street. Once again, remember to reward your Shepherd when they do good.

(Find out why your german shepherd might be jumping up and biting.)

Playing with your German Shepherd is not only an excellent way to keep them from boredom and helping them stay fit; it can also continue to grow the bond between the two of you. Keeping that bond strong plays a massive part in training your German Shepherd to be a guard dog.

(Want to know whether or not huskies make good guard dogs?)

German Shepherds are fantastic creatures that should not be underestimated. Their loyalty is like none other. They will stay by your side until the bitter end to protect you. And on top of this, they are the most rewarding dogs to have to guard you and your family.

They are strong, intelligent, and it is hard for them to be scared by anything, which makes them the perfect guard dog for anyone who would enjoy having a German Shepherd.

If they seem like they would be a good fit for you and your family, be sure to be ready to enroll them in class. They need you to be there for them just as much as you need them to be there for you.

Remember to reward them when they are good, and never hit or abuse a dog if they do something wrong or have a hard time listening.  You need to have a strong bond with your German Shepherd in order to have a great guard dog.