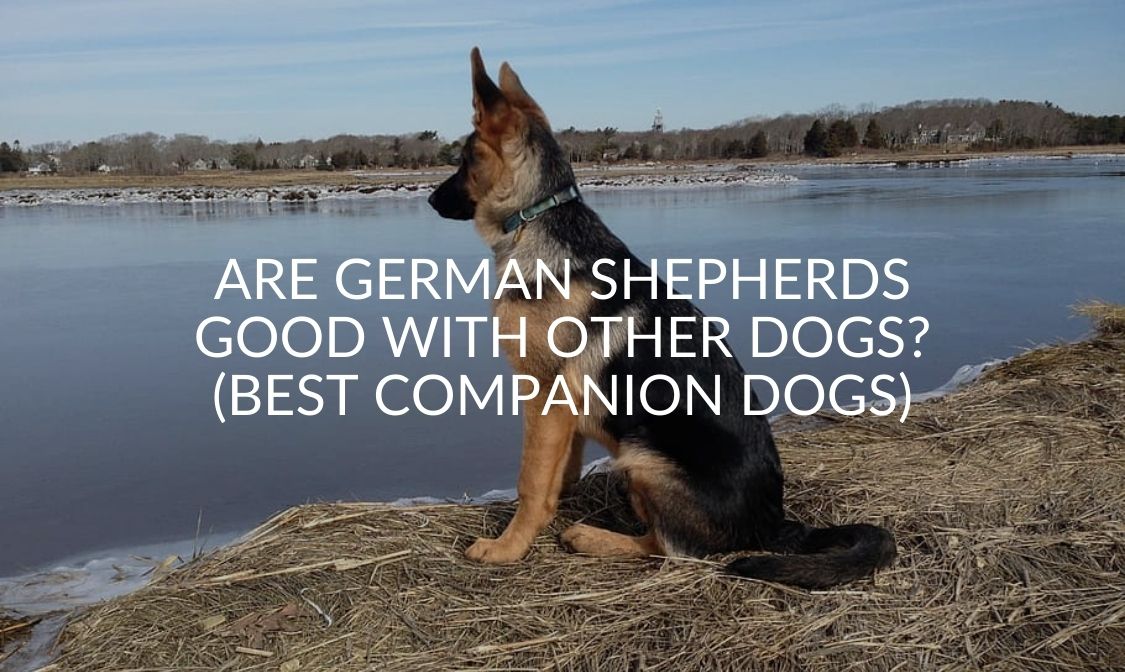 Are German Shepherds Good With Other Dogs?

Well, the answer is: yes. They make good companion dogs for cats and other dog breeds. They’re intelligent, good-natured, and more than willing to play with others.

They are hyperactive, however, and as such, it is worth noting that a German Shepherd will have their own needs and wants when it comes to companions. Still, there is nary a better choice for a friend for your pets.

Additionally, for companion dogs, German Shepherds generally get along with other ‘worker’ dogs.

That is, dogs are built for running, jumping, and doing a job as opposed to just lying around the house. Dogs like huskies and labradors make good friends with German Shepherds.

That said, on the flip side, German Shepherds don’t really get along with dogs that cover their eyes. For example, an Old English Sheepdog. I guess it’s because the eyes are hidden that causes German Shepherds to distrust them.

Do German Shepherds Get Along with Other Dogs?

To go into greater depth, it does vary from breed to breed, animal to animal, and dog to dog. Much like any person, there’s no guarantee that a German Shepherd will get along with others.

Now, first things first, let’s talk a bit about what a German Shepherd is. A German Shepherd is a breed made to…well, Shepherd sheep. They’re hyperactive, fast, and more than willing to play. So, if you like to go outside, or are pretty energetic, then this is a good breed for you.

But, keep in mind that a German Shepherd’s temperament does depend on the line it comes from. I.e., if the line has a history of angry pups, then it stands to reason that the next one will likely have anger issues.

If you want a nice, easier-going German Shepherd, then it might not be a bad idea to try to get a longhaired breed or a solid white one.

It is recorded that some German Shepherds do tend to be aggressive to dogs of the same gender.

That said, it is possible that so long as there isn’t another ‘dominant’ dog, then it’s likely that they will get along. That said, try to be aware of the German Shepherd’s line and general temperament. Some dogs might get along better with others.

But if that does happen, it does fall to the owner to take responsibility for their dog. Training might be necessary.

As said before, there are breeds German Shepherds don’t get along with, and most of those breeds involve their eyes being covered. English Sheepdog, Bouviers serve as examples. But thankfully, if introduced at a young age, then it’s likely that the two will most likely get along.

Now, let us talk a bit about which dogs get along with German Shepherds.

Want To Train Your German Shepherd With Peace Of Mind?

If you haven’t trained your German shepherd properly, then this is the perfect time to start. Whatever bad behavior your shepherd has, whether it’s barking at night or other bad behaviors, using the right training program is the key to having an obedient and happy pup.

With Brain Training For Dogs, you’ll save yourself a ton of time and effort. Instead of banging your head against the wall trying to figure out why your dog won’t listen, you’ll follow a path that has been tried, tested, and, most importantly, that’s given proven results. Not to mention the fact, that you’ll be able to fit the course around your schedule, not fit your schedule around a trainer or obedience class.

Just imagine how great it will feel to finally be able to trust your German Shepherd completely and never worry whether they’ll be naughty or not. Instead, you’ll have the peace of mind that you have a well-behaved pup, and the boundaries you set for them will always be there, EVEN IF YOU’RE NOT.

What Are The Best Companion Dogs For German Shepherds?

In general, most German Shepherds will get along with other breeds, be they small or large. A few key traits among breeds are athleticism, intelligence, energy, and herding instinct.

Be it because of their shared love of running; a German Shepherd will likely get along well with a Siberian Huskey. As both breeds are known for their athleticism, it makes sense that the two breeds would agree with each other. Just be warned that you will most likely be going on many, many runs.

A dog that goes with the flow paired with a breed that sprints at the flow at Mach 10. A labrador is well known for its easy-going nature, and when paired with the German Shepherd’s drive, they make an odd couple. But, they are both social animals, and as such, they will get along with active and energetic families.

Do you know how that one high-energy guy in school was always friends with that low-pep guy? Yeah, these breeds are that in a nutshell. The Golden Retriever is calm, composed, and always thinking, providing a nice counterbalance to the German Shepherd’s extreme energy.

Like the German Shepherd, these dogs were built for herding. Athletic, intelligent, and with a fierce love of the outdoors, a Border Collier makes a great friend for a German Shepherd due to their shared interests and herding instincts.

Heck, they might even try to herd each other! But be sure to step in case things get out of control.

While this is just another dog, it stands to reason that a German Shepherd will get along with other German Shepherd. Since they share the same traits, with only personalities differing between them, they can both act as energy sponges for each other.

What Small Breeds Can Live With German Shepherds?

Surprisingly, many people report owning both a corgi and a German Shepherd. It could be that the two just naturally get along since they are both social animals with a lot of energy.

But, try to be wary if they start to fight or try to establish dominance. Corgis like to play, and so GSDs, so, naturally, someone might get hurt.

Brave, high energy, and handsome at that, a Belgian Sheepdog makes a great friend for a GSD because of their mutual interests in herding, running, and generally being outdoors. Since they’re both made for herding sheep, cows, and at times, people, these two breeds will most likely get along.

This can vary from dog to dog, as some poodles might not enjoy the German Shepherd’s high energy level, but if you’re lucky or just good at rearing dogs, you might get a pair that will heartily enjoy each other’s company.

There’s a better success rate if you raise both from a young age, though keep in mind that training will likely be necessary to keep both of them under control.

Now, these two couldn’t be more different. One is big and handsome, the other small and pretty. But, just like any good friendship, these two breeds do have a few things in common. For starters, they are both social, energetic animals that love to walk.

And plus, it’s funny to see a small dog waddling along with a bigger, more rugged-looking German Shepherd.

That said, as mentioned before, be sure to raise them together and to clear away the hair away from the Shih Tzu’s eyes, as the German Shepherd doesn’t like that.

So, high energy, love to herd, both named Shepherd? Yeah, these two are made to be friends. The Australian Shepherd is a distant cousin of the German Shepherd, and as a result, these two breeds do share similarities in both appearance and physical needs.

They both need to run, need to herd, and need to play. Now, these are roughly the same size, so they can play roughly together without fear of injury.

I know that Bulldogs are often seen as fighters, but this couldn’t be further from the truth. Bulldogs are loving and loyal, and they can make good companions for German Shepherds so long as you keep in mind their temperament.

Now, again, this can vary from dog to dog and line. But, if you can expect them to get along if you choose well. Again, this is just on a dog-to-dog basis, so be wary.

Though this might cause some friction between them, if the two care about each other enough, then they might fill that social need on their own.

Is It Good To Have Two German Shepherds?

Of course! If both are raised from a young age, then these two will be lifelong friends! That said, it might be a bit difficult if a young pup is introduced to an older dog, so keep that in mind.

Do German Shepherds Get Along With Small Dogs?

It varies. In general, German Shepherds can get along with smaller breeds, but if their eyes are covered, then you might need to be wary, but keep their eyes uncovered, and you should be fine. In addition, there is always a chance that the smaller dog will be injured in their playtime.

Do German Shepherds Get Along Well With Other Dogs?

As said before, their lines matter a lot, along with temperament. Don’t take anything here written as a hard rule; more like a general description. But, in general, German Shepherds love to make friends.

So, do German Shepherds make good Companion dogs? Well, there are a few ups and downs for each breed. In general, a German Shepherd will most likely get along with dogs that share its traits, such as a herding instinct or athletism.

Large to medium breeds, such as Labradors, Golden Retrievers, and Border collies, are good choices for companion dogs, while smaller breeds like Australian Shepherds or Poodles might be hit or miss.

But, as mentioned before, German Shepherds might injure smaller dogs and distrust breeds that have covered eyes. Granted, the latter problem can be solved by a groomer, but it is still something to consider.

But, a German Shepherd, above all else, is meant to be outdoors, running around and playing fetch. So, if you’re very much the type of person who loves to run, you should consider getting a German Shepherd.

Or, if you’re looking for a friend for your doggy, then a German Shepherd will be a good choice so long as you keep in mind the dog’s needs, line, personality, and general temperament. Proper training might be in order, but that’s the case for most dog breeds to begin with.

Finally, keep in mind that German Shepherds are working dogs. They are meant for hard work, not sleeping around, or taking it easy, so be aware of this before you get a German Shepherd as a companion dog.