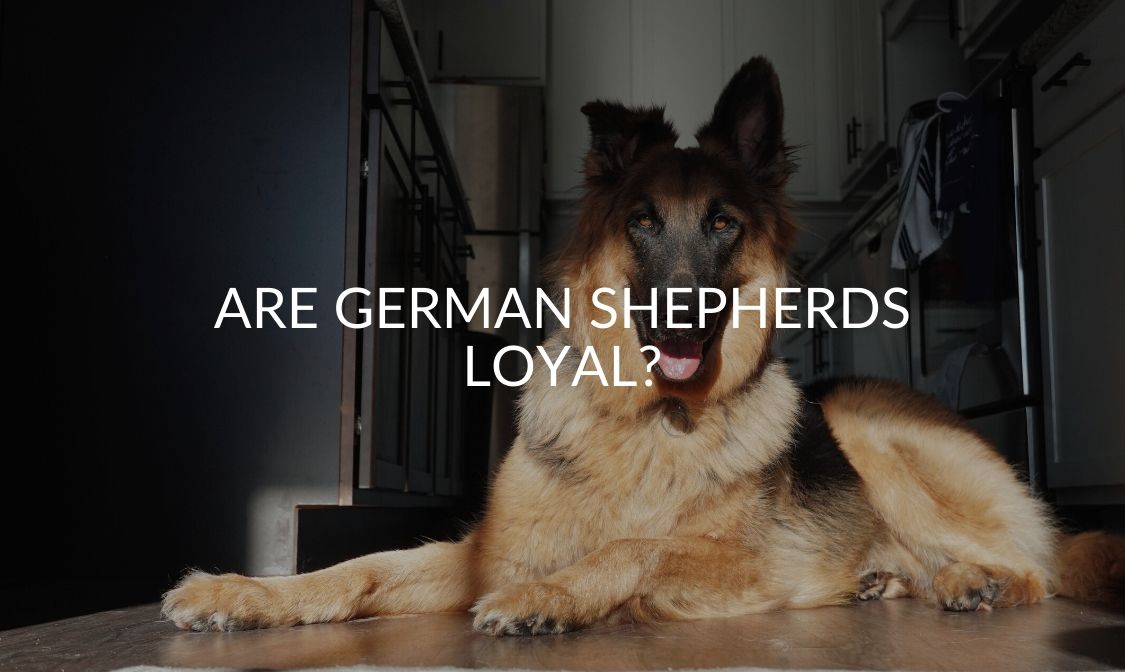 Are german shepherds loyal? This is one of the questions you may be asking yourself before you purchase one. Or perhaps, you have one and you’re not sure if their behavior matches up with the general temperament of the breed.

In this article, you’ll find out whether german shepherds are loyal, what makes them loyal, what causes a lack of loyalty, if females or males are more loyal, and much more!

The short answer is yes, german shepherds do tend to be loyal. However, you shouldn’t rely on their temperament alone to create an unbreakable bond.

While they do have it built in to protect their owner, if they’re not socialized and treated properly, this drive can often be overlooked.

Why Are German Shepherds So Loyal?

German shepherds have been bred as guard dogs and herders. Because of this, they need to have a strong connection with their owner to make sure they’re doing their job properly. As well as this, they still have the built-in instinct of the pack inside them.

It’s ingrained into their DNA to be loyal to the pack and protect them so that the pack will look after them as well.

(Find out the important reasons you may not want to shave your german shepherd.)

Do German Shepherds Bond With One Person?

A lot of people think that german shepherds tend to bond with one person a lot more than the rest of the family. And to a certain extent, this is true. However, it always depends on the type of socialization your german shepherd has had, as well as their temperament.

As a rule of thumb, your German shepherd is going to be most loyal to the person who takes care of them. Specifically, the person that gives them food, trains them, and walks them.

Sometimes the bond with a one person can be so strong, that even if two people give your pup a command at the same time, they’ll choose to listen to the person they’re most loyal too.

(Have you ever wondered if german shepherds make good guard dogs?)

When trying to understand how loyal german shepherds are you need to take their sex into account. While both sexes are loyal, they’re loyal in different ways.

Males typically tend to bond with one person more over their family. However, that doesn’t mean that they won’t be loyal to their family either. It just means they’ll obey one person a lot more. As well as this they’re often more protective over territory and land than females are.

On the other hand, females tend to be a lot more loyal to the family as a whole rather than forming a close bond with one person while it will be there, it won’t be as strong). They’re also less aloof around strangers and tend to be friendlier towards children as well.

(Find out why your german shepherd is growling at you! And more importantly what to do.)

How Do German Shepherds Choose Who They’re Most Loyal Too?

Fortunately, it’s not hard to understand the choices your german shepherd makes when they’re choosing who they’re most loyal too (even though the choices are unintentional). Here are some of the common ways that increase loyalty in a german shepherd.

The Person Who Feeds Them

One of the most common ways to strengthen the bond with your german shepherd is to always be the person who feeds them. This way they’re going to see you as their provider and the leader of the pack. This, in turn, helps to form an unbreakable bond.

This is probably the biggest factor in deciding who your german shepherd is loyal too. If you’re the person that trained them from a young age and socialized them, then the chances are they’re going to feel an insane amount of loyalty towards you.

During the first 6 months, your german shepherd is going to rely on you massively. Not just to provide for them, but to make sure they’re safe and comfortable. If you’re the person that has done this for them, then they’re never going to forget it.

However, if you want to make sure they bond as much as possible with you, then you need to make sure you’re training them in the right way. If your training is based on punishment, then they may end up fearing or mistrusting you.

They Associate You With Positivity

And lastly, a german shepherd is going to be loyal to the person they get the most positivity from. (This is one of the reasons it’s so important to train them properly.)

However, it’s not just training. As well as that, it’s also the person who always takes them for a walk, the person that always has time to shower them with love and of course the person who feeds them!

If you’re this person then the chances are you german shepherd is going to have an incredibly deep bond with you!

If you’re reading this, then the chances are that your german shepherd is most loyal to you. While this is great and a massive compliment, it doesn’t have to be this way if you don’t want it to be. In fact, you can also increase the bond your german shepherd feels towards the rest of your family as well!

Here are some of the best ways!

Let Them Join The Training

Get Your Family To Feed Them

Another great way you can help your family grow the bond with your german shepherd is by getting them to feed yocur pup. When they feed them once again, they’re going to teach them that they can provide for your pup and that your pup can trust them!

This is a great way to get the bond between them to grow even stronger, and your german shepherd will become even more loyal towards them. And it doesn’t have to be dinner time. While not as effective, giving them treats will also increase the love they feel for your family as well!

(Want to know if german shepherds are easy or hard to train? Check out this article.)

Spend More Time With Your Pup

How much time is your family spending with your pup? If it’s not a lot then it’s no wonder your dog doesn’t have the same loyalty towards them as they do to you!

When your family spends more time with your dog, they’ll love them a lot more, especially if they’re stroking them or playing with them.

Take Your German Shepherd For A Walk

Taking your german shepherd for a walk every day will increase the loyalty they feel to that member of your family in no time. And as a bonus it means you get a couple of days off from doing it!

Playing with a german shepherd is another way to increase the bond and loyalty they feel towards members of your family. Games like tug of war and fetch are great, but they’ll even enjoy playfighting as well!

Just remember, if you do play with them (especially play fighting) then you’re going to have to make sure that they calm down afterward. Otherwise, you’ll have a very hectic dog on your hands!

Give Them Lots Of Love

All of these show it, but the real take away is to make sure your family is giving your german shepherd lots of love!

Spending time with them and stroking them will let them know this, however, any of the things mentioned above will also show it as well!

(If you’re a first time german shepherd owner find out everything you can expect here!)

More importantly, if you don’t put the time in and train and socialize your german shepherd properly, then they probably won’t have the same level of loyalty!

If you liked this article make sure you check out the rest of the website! Otherwise have a great day!