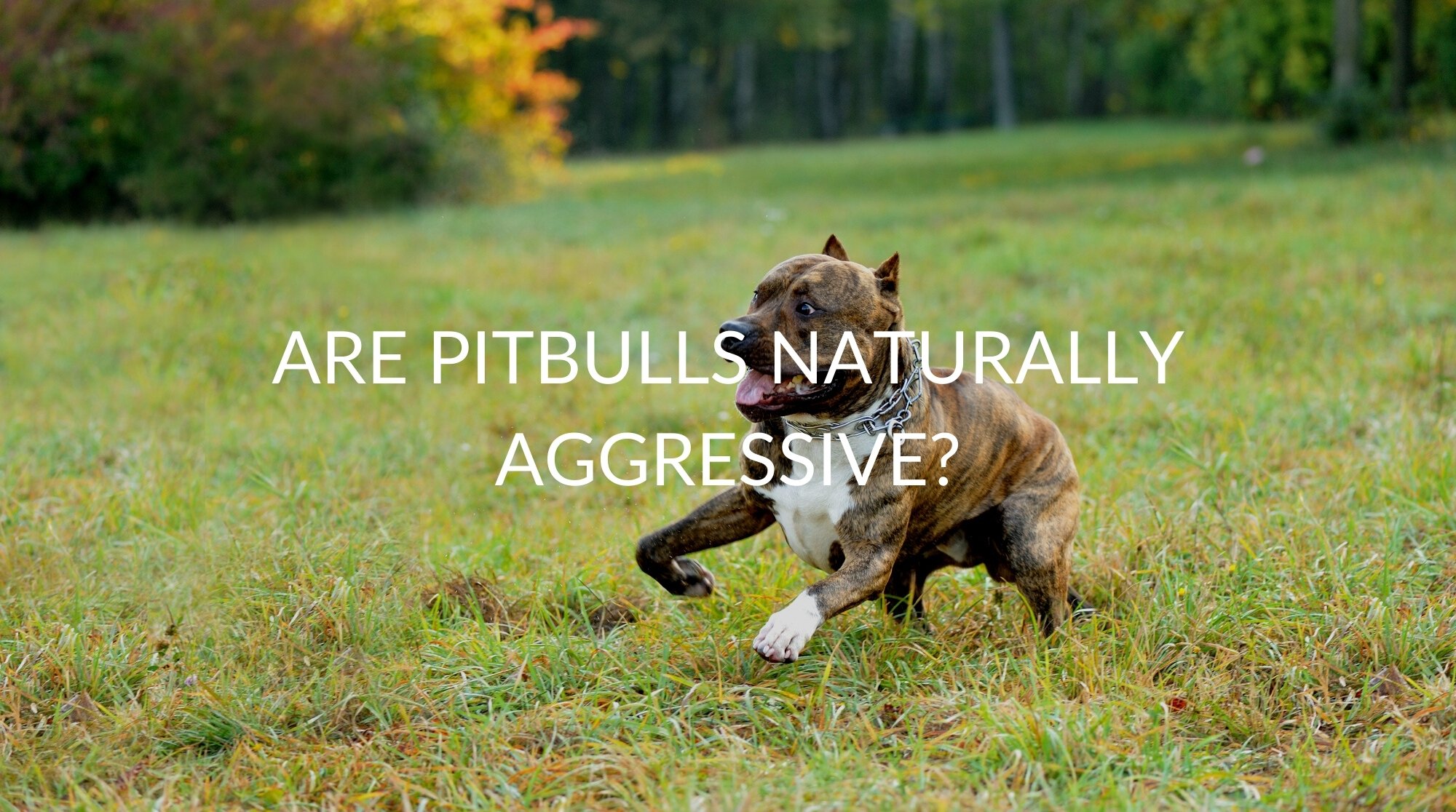 Pitbulls are an iconic dog breed, but aside from their distinctive appearance, many people know of Pitbulls because of their reputation for aggression. Whether you consider adopting a Pitbull or just want to know more, it is normal to wonder if Pitbulls are naturally aggressive.

Pitbulls are a fascinating breed, but they can be controversial. Amid the many myths about what Pitbulls are really like, it is helpful to do your research. Keep reading for more information on Pitbulls’ temperaments and what these dogs are like.

Pitbulls are not naturally any more aggressive toward humans than other dog breeds. For this reason, if you are considering purchasing or adopting a Pitbull, you can rest assured that your new pet will probably not act aggressively toward you if he or she is properly trained.

However, Pitbulls are known to be less tolerant of other dogs and animals due to their innate hunting instinct toward other animals. Pitbulls were originally bred to fight bears and bulls, and this has led many people to breed Pitbulls for the illegal purpose of fighting other dogs.

Additionally, many people use Pitbulls for illegal activities like dogfighting because of their tenacity and athletic build. Because of this, many Pitbulls have faced neglect and abuse or have been trained to demonstrate aggression toward other dogs.

In short, Pitbulls are not naturally aggressive toward humans. However, humans have adapted Pitbulls for purposes that can make them aggressive or dangerous in the wrong hands.

Are Pitbulls More Aggressive Than Other Dogs?

Many apartment complexes and even towns have banned Pitbulls because of their bad reputation. Pitbulls are not more aggressive toward humans than other dogs, but they do possess some traits that can foster aggression towards other animals under the right circumstances.

Pitbulls are very athletic and have tremendous jaw strength. These physical traits have made them popular dog breeds for dogfighting and other forms of violent sports. When Pitbulls are raised to be fighting dogs, they will become more aggressive than other breeds.

However, if raised responsibly and lovingly, Pitbulls can be as gentle and kind as any other dog breed. They can be great with children and are loyal companions.

Why Do Pitbulls Turn Aggressive?

The main reason why Pitbulls become aggressive is because of mistreatment or training from their owners. As mentioned before, Pitbulls are popular choices for dogfighting, and being raised in these cruel circumstances can result in aggression toward other animals and even humans.

Any dog breed can demonstrate aggression if it is bred for fighting or mistreated, and Pitbulls have just been unfortunately the target of abuse because of their physical capabilities.

Many Pitbulls who are rescued have been the victims of animal abuse or bred for fighting. For this reason, most adoption agencies recommend that those adopting a rescue Pitbull have significant experience in training and working with potentially aggressive animals. With all of the information about Pitbulls that exists, it can be easy to become confused. If Pitbulls are not aggressive toward humans, then what are they actually like? In reality, Pitbulls are normal dogs! They are loyal and loving, and their behavior depends a lot on how they have been trained.

Some Pitbulls are wonderful with children, and despite their reputation for hostility toward other dogs, they can even be okay interacting with other dogs in their household and the world around them. Pitbulls are highly energetic dogs that need a lot of exercise and mental engagement to stay happy and healthy.

Pitbulls can also be smart and trainable dogs. The most important thing to remember about Pitbulls and all dog breeds is that each dog is an individual. Although there may be patterns of behavior across breeds, please note that every dog can be different. Pitbulls can display a variety of distinct behaviors.

How Can I Tell if a Pitbull Is Aggressive?

If you are considering adopting or purchasing a Pitbull, you will need to proceed with care. The best thing you can do to determine aggression is to speak directly to the shelter or breeder to get to know the dog you have in mind.

Consider asking the following questions before selecting a dog:

If you get to know the individual dog or puppy, you reduce the risk that you may end up with an aggressive animal that could be a liability to yourself or other animals.

In general, if you are hoping to avoid aggression in a Pitbull, you should consider purchasing a puppy from a breeder or adopting one that is proven to get along well with humans and other dogs. A Pitbull that has been rescued from an abusive situation will need specialized training to overcome aggressive habits.

Before adopting or buying a Pitbull, you may have some questions. The following are some frequently asked questions about the breed and answers that can give insight into what it is like to own a Pitbull.

Is it Legal to Own a Pitbull?

Depending on where you live, there may be restrictions on owning a Pitbull. Some apartment complexes will not allow you to own a Pitbull, and some towns have even gone so far as to ban Pitbulls.

If you do own a Pitbull, some places will have legal requirements you will need to follow as far as keeping your dog leashed or providing a fenced yard. Before owning a Pitbull, do some research on your area to learn the specific guidelines.

Are Pitbulls Hard to Take Care Of?

Pitbulls can be amazing dogs, but they are also very high energy. You will need to provide a lot of exercise for your dog and dedicate time toward training it. They can also be stubborn, so persistence is necessary to get your Pitbull to learn commands and follow them.

Pitbulls are very loyal and can be very protective of children. If you have a Pitbull that is properly trained and socialized, you can reasonably expect that they will be gentle with children and a lovely dog to have overall. Of course, every dog requires time and dedication to become well-trained.

Over the years, many different dog breeds have cycled in and out of public favor or considered aggressive. Recently, Pitbulls have gained a bad reputation for aggression. However, while it is true that Pitbulls may not get along well with other dogs, they are naturally not aggressive toward humans.

The most important factor is not the breed but training and socialization. If a Pitbull has been trained for aggression and is poorly socialized, he or she will be aggressive. However, a well-trained Pitbull can be an excellent asset to any household. Before you buy or adopt a Pitbull, do your research on the individual dog.