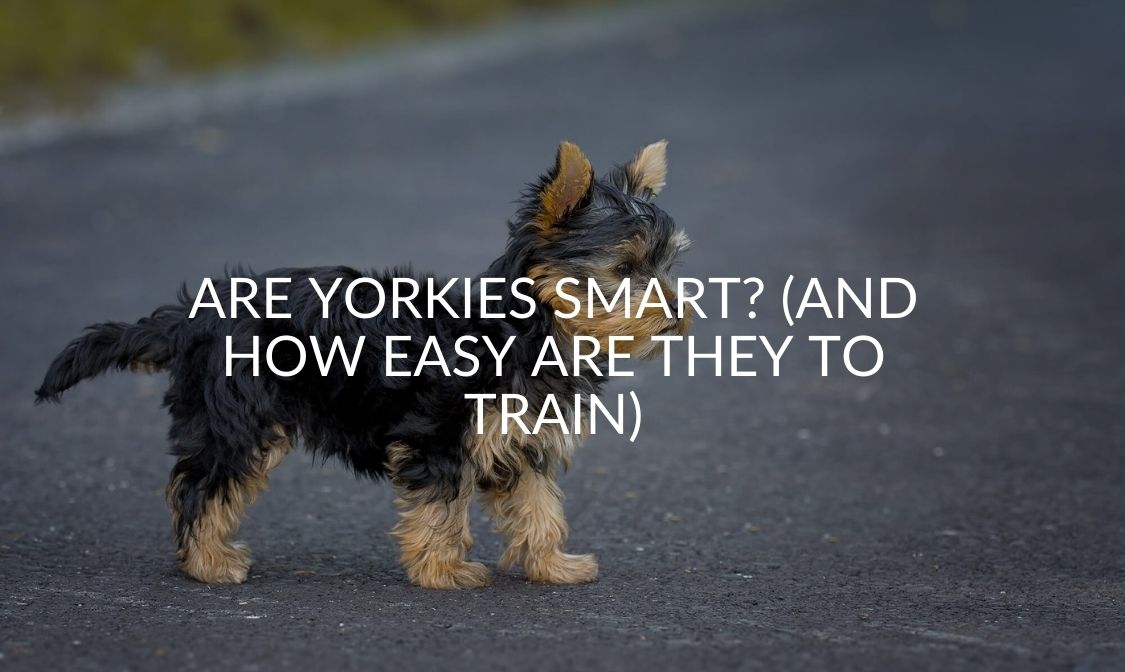 This article discusses the Yorkshire Terrier’s intelligence compared to other breeds, the different types of canine intelligence, and how easy it is to train them.

So, Are Yorkies Smart?

Yorkies are highly intelligent dogs that are smarter than most other breeds. In fact, they have ranked the 34th most intelligent breed out of 138. Yorkies are undeniably an intelligent and obedient breed, but they are not among the top 10 smartest breeds.

Also, dogs may be more intelligent than what they showed while testing. They may have been distracted, tired, hungry, or are not used to the method you used. While Yorkshire Terriers are an intelligent dog breed, each individual dog varies.

Also, there is more to intelligence than just obedience. Three types of canine intelligence make up a dog’s IQ.

What Are The Three Types Of Canine Intelligence?

There are three types of canine intelligence. The first is obedience, which refers to the success rate of a particular dog breed to complete a known command on the first ask.

Yorkies are an intelligent breed because of their obedience and quickness to learn commands and their instinctive and adaptive intelligence.

As for instinctive intelligence, Yorkies were bred to be hunters. They were bred to reach into small crevices. Yorkies would actually participate in hunts. They would burrow underground to chase small mammals such as foxes and badgers. They also hunted rats in mines.

Because Yorkshire Terriers are exceptionally good at hunting, which is what they were bred for, they have high instinctive intelligence.

Ph.D. and canine psychologist Stanley Coren developed a way to evaluate and rank dog breeds based on intelligence through his criteria of obedience and quickness to learn.

Some do not approve of Coren’s criteria of dog intelligence because it does not encompass every aspect of intelligence. However, it does provide a good starting point in testing for a dog’s IQ.

Coren’s criteria include the number of repetitions needed for a particular dog breed to learn a new command. The fewer repetitions that are needed for the dog to learn, the smarter the breed is.

Yorkies learned a new command with 15 to 25 repetitions, which is impressive. Most Yorkies obeyed the command on the first try. This means that they are highly obedient and quick learners.

Based on Coren’s criteria, Yorkies are placed in the same intelligence class as Samoyeds, Giant Schnauzers, Dalmatians, Newfoundlands, and Bearded Collies.

(Have you ever wondered whether your Yorkie would like to swim?)

Where Does A Yorkie’s Intelligence Compare To Other Dogs?

While Yorkies are an above-average-intelligence breed, other breeds of dogs are more intelligent and obedient. The top 10 ranking breeds are able to learn a new command with only five repetitions or less, which is three times faster than Yorkies.

How Smart Is A Yorkie Compared To A Human?

It is difficult to compare a Yorkie’s intelligence to a human’s intelligence. Some researchers believe that some of the smartest breeds of dogs are comparable to a two-year-old child in terms of intelligence.

Yorkies are considered a smart breed of dog based on their obedience, quickness to learn commands, innate hunting skills, and ability to adapt and learn for themselves. This is why it is difficult to compare intelligence with humans. The grounds of intelligence are simply too different.

How Can You Test Your Yorkie’s Intelligence?

There are plenty of ways to test your Yorkie’s intelligence. The following are simple tasks you can do or things you can pay attention to about your dog that will tell you how smart your dog is. This is not exclusive to Yorkies; you can test any dog with the following experiments.

One way to test your Yorkie’s intelligence is to determine what your dog does when their water dish is empty. A dog that lays down next to it and doesn’t bark or communicate to you does not show high intelligence. A dog that barks to get your attention is considered smart, and a dog that picks up the bowl and brings it to you is considered highly intelligent.

Another test is to see how many toys your Yorkie can identify by name. This means that when you call out the name of a specific toy, they bring you the correct toy. If your dog can’t bring you any correctly, they did not score well in the intelligence task. The more your dog can bring, the smarter they are.

How Many Repetitions To Learn A Command

If your Yorkie is on a routine, for example, you take them for a walk at the same time every day, determine what your dog does around that time.

If he doesn’t realize it is time for a walk, your dog is of average or below-average intelligence. If your dog gets restless about that time, they are smart. And if your dog picked up his leash or acknowledged the leash and waited by the door, they are highly intelligent.

If you find that your dog easily communicates their needs and desires and even shows expressions of their mood like frustration or excitement, they are a highly intelligent dog.

How To Train Your Yorkie With Peace Of Mind:

If you haven’t trained your Yorkie properly, then this is the perfect time to start. Whatever bad behavior your shepherd has, whether it’s barking at night or other bad behaviors, using the right training program is the key to having an obedient and happy pup.

Just imagine how great it will feel to finally be able to trust your Yorkie completely and never worry whether they’ll be naughty or not. Instead, you’ll have the peace of mind that you have a well-behaved pup, and the boundaries you set for them will always be there, EVEN IF YOU’RE NOT.

How Easy Is It To Train A Yorkie?

Yorkies are easy to train. Yorkies are naturally intelligent and are known to be quick learners. They do best when they get plenty of attention from their owner, as they are a very attached breed.

Yorkies are among the most highly trainable dog breeds because of their innate intelligence, ability to learn for themselves, adaptability, obedience, and ability to comprehend human behavior. They are also highly trainable because they were bred to work. Working breeds are easier to train than other breeds.

However, just because they are intelligent and obedient does not mean they are easy to house-train. The Yorkshire Terrier prefers the indoors. Therefore, they are reluctant to be house-trained. Yorkies tend to prefer the home environment and do not like to go out alone, so they can be difficult to potty train, especially in the cold.

If you live in a cold climate or an area with rainy seasons, a Yorkie may not be the best breed for you, especially if you are not willing to put in the time to train them and work with them.

Are Yorkies A Good Breed To Own?

Yorkies need a lot of mental stimulation, so they do not engage in destructive behavior. In this sense, their intelligence makes them harder to take care of than less intelligent breeds. While intelligence is important, you should not pick which dog you get based on intelligence alone. Temperament and personality are also things to consider.

Even though they are thought of as pampered purse dogs, they are competitive, passionate, aggressive, and self-reliant. They are not submissive dogs, so they may not be the best choice for families with young children. They make better companions for older people.

Yorkies make great pets for those with medical issues or senior citizens who would do best with a small lapdog. Their small size makes them great for carrying around, walking on a leash, or sitting on your lap.

They are an excellent choice for someone looking for an affectionate lapdog that prefers the indoors. They are also hypoallergenic!

What Should I Teach My Yorkie?

If you are bringing home a new Yorkie, the first thing you should teach them is where their food and water will be kept. Once they learn their new home and get familiar with where they will be sleeping, you can start house-training them. With patience and consistency, house training will take only a few weeks.

Try to use simple commands while your Yorkie is still a puppy. Start with basic commands such as sit, lay down, stay, shake, etc. You can also take your puppy to obedience classes to learn basic commands. This will also allow them to experience new things and socialize with other dogs and people.

After your Yorkie has learned basic commands, you can continue training with more complicated commands like roll over and play dead. It is best to continue teaching your Yorkie tricks, as they need a lot of mental stimulation.

In general, the Yorkshire Terrier breed is intelligent. They tend to be protective of their owners and bond quickly with them. They are also quick to be trained and can remember what they are taught for a long time.

Yorkies are a quick-learning, highly adaptable, innately intelligent breed of dog. However, this breed may not be the best for you if you are looking for an outdoorsy dog that gets along with bigger dogs.

They are also not a good choice if you travel or will not be home often to shower your Yorkie with attention. They are an affectionate, loyal breed that gets very attached to their owners.

Even though Yorkies are intelligent, they prefer the comfort of home and the indoors. They also hate being outside alone and fear getting wet. These factors combined make them a difficult breed to house-train.

In general, Yorkies make a great pet, as long as you are willing to put in the work and give them the attention and mental stimulation they need.