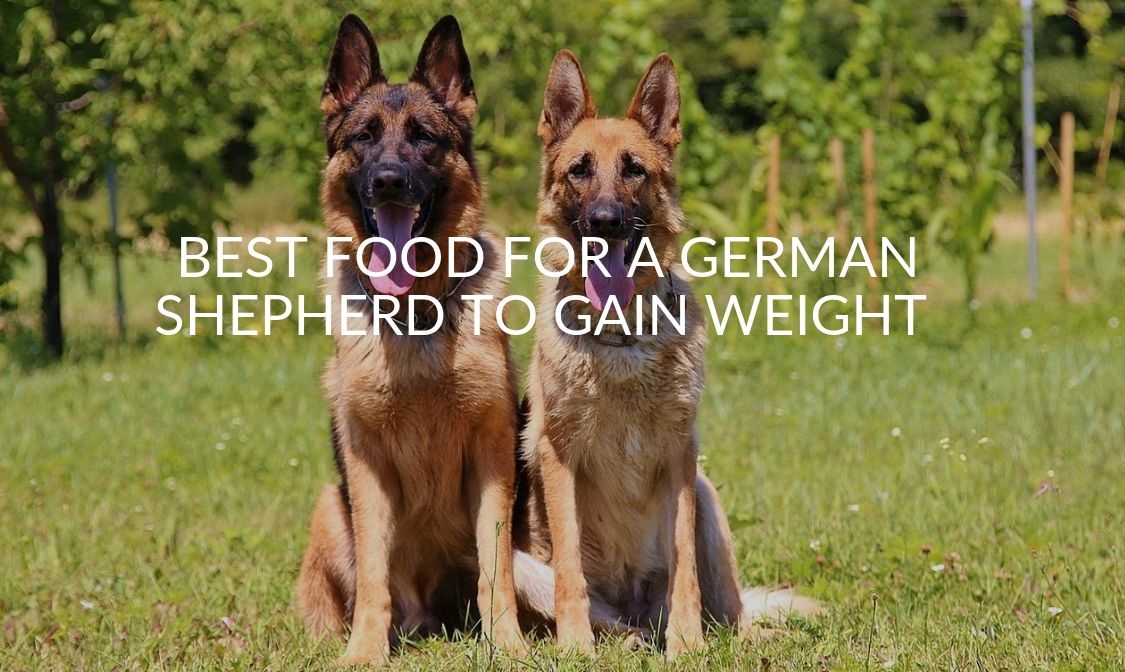 If your German shepherd doesn’t weigh as much as they should then you’ll need to make a change to their diet. By giving them food that’s higher in calories, you’re going to put weight back on them. However, you can’t use just any old food, as some food doesn’t have much nutritional value. Keep reading to find out the best food for a german shepherd to gain weight!

How To Spot Dog Food That’s Good For Weight Gain

Before buying dog food for your german shepherd, it’s important to know what to look for. After all, you want to make sure you’re feeding them high-quality food.

While your dog can eat plants, they’re a lot harder to break down. However, animal protein is the most easily absorbed by your german shepherd. When checking the ingredients, make sure the main protein sources are from animals!

While the average dog food currently has around 400 calories per cup, when you’re trying to get your german shepherd to gain weight, of course, you’re going to want a dog food that has more.

Ideally, you should be feeding them as many healthy calories as possible. While 450 calories per cup is a good place to start, as you’re about to find out some dog foods contain even more!

Fat (But Not Too Much)

While fat should always be eaten in moderation, it’s alright to buy your german shepherd food with a little more fat than usual. While protein and carbs only pack 4 calories per gram, fat has a whopping 9 calories per gram!

Dog food higher in fat is a great way to make sure your german shepherd is getting enough calories! However, make sure the fat is coming from a healthy source and that it doesn’t make up more than 20% of their meal.

Carbohydrates are the last source of calories that your german shepherd needs. Just make sure they’re easy to digest. Ideally, vegetables, plants, legumes, and fruit are a good choice.

However, a lot of carbohydrates commonly found in dog food are from grains. While this is normally fine, some german shepherds can’t tolerate them.

(Find out the reasons your german shepherd might be too skinny.)

How Many Calories Does Your German Shepherd Need?

However, if you have an active german shepherd then you’re going to have to feed them even more. 1,740-2,100 calories a day is the recommended amount.

However, protein on its own isn’t enough. On top of protein, you also need to make sure that your german shepherd is getting enough vitamins, minerals and other sources of nutrients in their diet as well.

What’s The Best Dog Food For A German Shepherd To Gain Weight?

There are lots of different dog foods that stand out as great choices to help your german shepherd gain weight. However, there’s one that definitely rises to the top. If you’re looking for the BEST dog food for a german shepherd to gain weight then you should buy…

Packing 525 calories per cup and boasting a 30% protein and 20% fat Bully Max High-Performance Super Premium is THE choice dog food for german shepherds that are trying to gain weight.

But it’s not just the high calorie count that makes this such a brilliant dog food. It’s also full of beneficial vitamins and minerals.

It also lacks artificial flavors, colors, preservatives, and hidden ingredients, which, cause a lot of harm to dogs over time.

The main ingredient in High Performance Dog Food is meat rather than other substitutes like wheat and soy. This is great as they commonly cause allergic reactions in your dog, whereas meat won’t.

All of this makes High Performance the best choice for your german shepherd. If you do purchase it you’ll watch their weight going up steadily each week until they’re at a healthy weight once more!

One small downside is that it’s pricier than some other dog foods. However, when it comes to your dogs health, no price is too great, and this food is definitely the best choice for weight gain!

Crave Grain Free Adult Dry Dog Food is another great choice of food for any german shepherd that needs to put on weight. It is made from 34% high protein and around 17% fat.

Just like Bully-Max it doesn’t have any artificial colors, preservatives or flavors which means it’s nice and healthy for your german shepherd.

As well as a variety of meat based nutrients it also includes some vegetable nutrients (Contrary to popular belief, dogs are actually omnivores). This means your german shepherd is going to get the full spectrum of nutrients they need in their diets!

The biggest downside to crave unfortunately, is that it only offers about 450 calories per cup. This is significantly less than Bully Max. If it wasn’t for the the fact it has less calories than Bully Max, this food would be a strong contender for the best dog food for german shepherds to gain weight!

Older dogs often have a hard time keeping weight on, which means they need more calories in their food. This food has around 500 calories per cup, which is a great amount for putting weight on your german shepherd.

It’s made with roughly 35% protein and 21% fat which makes it a great choice for a skinny german shepherd.

But it’s not just the amount of protein and fat that’s in this food that makes it exceptional, it’s also the ingredients. They provide plenty of amino acids, omega 3 & 6, and probiotics, as well as plenty of minerals and vitamins.

This in combination with the fact they are made without lots of potentially irritating ingredients such as soy, grain, wheat and by products means that you’re only feeding your german shepherd the best!

The only downside to this product once again is the cost. Using this as your german shepherds staple meal is going to become expensive quite quickly.

Adirondack 30% Protein High Fat Recipe is another great choice of dog food. Just like the previous two, it’s high in protein and fat (30% protein and 20% fat). And just like Bully Max it also has a high amount of calories (roughly 535 per cup).

While it does have lots of high quality animal meat in it, it also has some ingredients that aren’t as useful. Oat groats and barley, make an appearance. And while they’re not neccessarily bad for your german shepherd they don’t provide much nutritional benefit either.

Another downside is that Adirondack isn’t grain-free. In most cases, this is going to be fine but some dogs do have a negative reaction to grain. If this sounds like your german shepherd then you’re best off avoiding this dog food.

Any dog food that is grain free is always going to be a solid choice for your german shepherd. And the fact that Merrick Grain Free Dry Dog Food is made from roughly 38% protein and 18% fat makes this great for german shepherds who need to put on lean weight.

However, even with all of the protein and fat this dog food still struggles to keep its calorie level high enough. In fact, one cup is only going to offer your dog about 402 calories. While they’ll still put on weight, it’s going to take longer than other dog foods on the list.

The main ingredient in this dog food is a deboned meat of some kind (depending on the flavor you choose) which means your dog is getting a nutritious meal.

It also contains plenty of antioxidants and fatty acids. So, not only is your german shepherd going to gain weight effectively, but they’re also going to have more energy and a nice shiny coat too!

If you don’t mind the lack of calories then this is going to be a great choice for you!

Ingredients That You Should NEVER Feed Your Dog

In most cases, the food that you’re going to feed your dog isn’t going to be terrible (even if it’s not great). However, if you ever see any of the following ingredients in your dogs’ food, you should avoid buying it completely.

While specific animal fat is generally okay, if your dog food only refers to this ingredient as “animal fat” you may want to consider purchasing somewhere else.

The problem is you have no idea what the animal is or the condition it was in before it was added to your dog’s food. It could be from an animal that was sick with disease or rotten, roadkill, and possibly someone else’s dead pet.

For this reason, “animal fat” is best avoided, as you’re not going to get a clear picture of what your german shepherd is actually eating.

Another ingredient you should avoid is corn syrup and corn. Corn syrup is basically sugar and it’s only used to sweeten the food. While that sounds nice, it lacks any useful nutrition.

While it will cause weight gain, it will be a bad kind of weight gain which may cause diabetes.

Just like generic animal fats, generic by-products should also be avoided. Because you don’t know what they are, it means they could be anything. Rotten meat, diseased parts, and even tumors.

Propylene Glycol is used to keep moisture in your dog’s food, however, it does have some nasty side effects. The biggest one is it’s known to cause Heinz body anemia in animals. Because of this, it’s already been banned in cat food.

While the FDA says that it’s acceptable to use in small doses, the problem is when you’re feeding your dog the same food every day, they’re never going to be able to get it in small doses.

So if you see propylene glycol in your pet’s food, you’re best avoiding it!

Menadione is a man-made version of vitamin K. While it does have some benefits to your dog, they’re not as beneficial as natural vitamin K. And the downsides are far worse.

In fact, Menadione is so risky the FDA has banned it in over the counter supplements. So if you notice Menadione in your dog’s food, then you’re probably better avoiding it.

As you can see there’s a lot to take in from this article. And there are also lots of great types of food for you to choose from. Here are the main things to remember:

If you liked this article or have any more questions leave them in the comments below. Otherwise, have a great day!