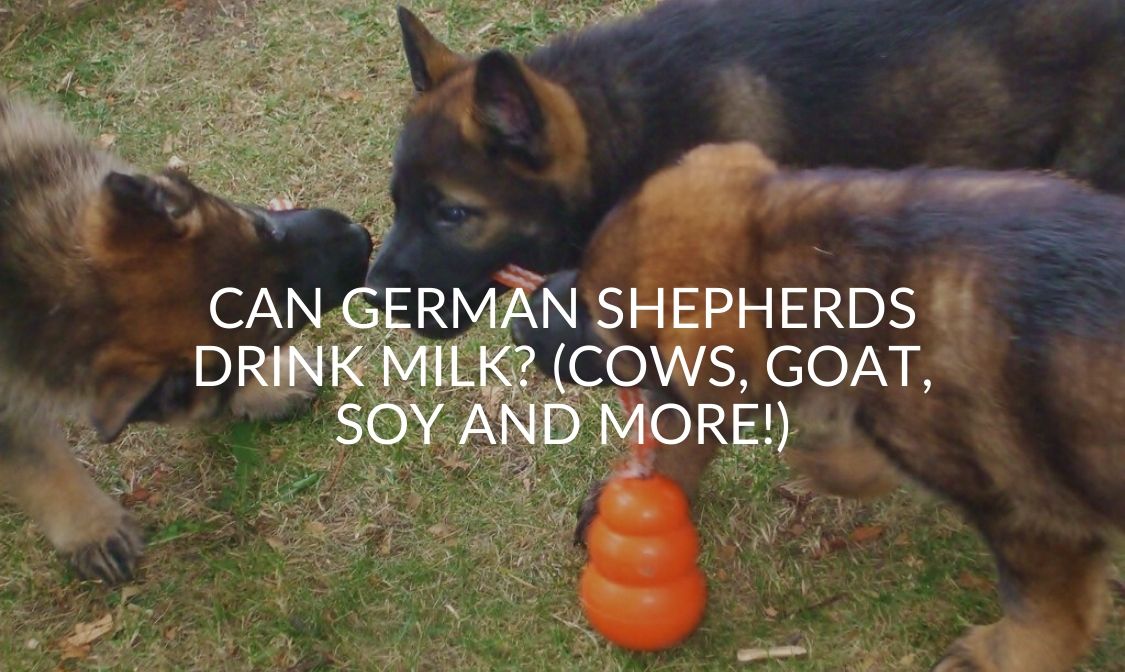 It really depends on your dog, but generally, yes, they can. However, it’s important to know that lactose intolerance is quite common in german shepherds, so if you notice any of the signs (which you’ll learn about in this article), then you should stop giving your dog milk immediately.

Generally, the older your german shepherd gets, the less likely it is they’ll be able to drink milk. This is because they are less able to produce the enzyme lactase that is needed to break down the lactose found in milk.

While you may think that giving a puppy milk will be even more beneficial, this isn’t true. In fact, you’re definitely going to want to avoid giving your german shepherd pup milk.

Puppies do have more lactase to break down their mother’s milk, but it’s not going to be enough to break down all the lactose in cows milk. So for this reason, you should avoid giving your pup cows milk. At least, until they’ve been completely weaned off puppy food.

Is Milk Good For German Shepherds?

Now that you know your german shepherd can drink milk, you may be wondering what the health benefits are.

Milk contains vitamin B12, vitamin D, calcium and protein, all of which are necessary nutrients in your dog’s diet. However, it is important to remember, that if you’re feeding your german shepherd high-quality dog food, then they’ll be getting all of this anyway.

Calcium has a whole bunch of uses in your pup’s body. The most commonly known one is helping to keep bones strong, but it doesn’t just do this. It also helps with muscle contractions including the heart beating, and it also helps with milk production, vision, and metabolism.

Lastly, as you probably know, milk also contains plenty of protein. Protein is necessary for repairing muscles as well as helping them grow. And just like carbohydrates, it’s also going to provide energy for your pup to move.

(Find out if german shepherds can eat shrimp.)

Can Too Much Milk Be Bad For Your German Shepherd?

As previously mentioned, a lot of german shepherds can suffer from lactose intolerance. But in some cases, it depends on the amount of milk you give them. Some dogs will be able to drink more than others.

However, if you do notice the common signs of lactose intolerance such as diarrhea, gassiness and bloating, then you should stop giving your german shepherd milk.

In more extreme cases, they can also end up vomiting as well.

(Is your german shepherd growling at you? Find out why!)

While almonds aren’t toxic to german shepherds, it can be hard to make sure that no other nuts have contaminated the milk. As well as this, you may find your dog has a hard time digesting almonds and almond milk as well.

If you do want to give your german shepherd almond milk, you should only give them a teaspoon every once in a while.

German shepherds can drink goat milk, and in fact, it might actually be better for them than normal milk. The reason for this is that it’s much easier to digest than cows milk. And it’s also less likely that your german shepherd will have an allergic reaction!

And you don’t have to worry about losing any of the nutrients either. Goats milk is similar in nutrient content to cows milk, it’s just much easier to digest.

So if you thinking about cows milk, but you’re not sure, goats milk is often a much better choice.

German shepherds can drink soy milk, however, it may not be recommended. Soy is used in a lot of dog food, and it can also be the reason for a lot of allergic reactions.

If you’re going to give your german shepherd soy milk, only give them a tiny amount at first to see how they react. If you notice that they show signs of an allergic reaction like vomiting or diarrhea then you shouldn’t give them anymore.

As well as this, it’s also important to remember that soy milk can be high in sugar and calories.

(Why you shouldn’t feed your german shepherd raw meat.)

What To Look Out For

Milk sometimes has additives in it that are fine for humans but can be dangerous for your german shepherd. One such additive is xylitol. If you notice xylitol in any food you should never give it to your pup!

How Much Milk Should You Give Your German Shepherd

The general rule of thumb is that 10% of your german shepherd’s diet can be treats and the other 90% should be food.

However, due to the high-calorie count in milk, you should avoid giving your german shepherd this much.

Stick to a few tablespoons a week and if you notice they’re putting on weight stop giving them milk immediately.

So Can German Shepherds Drink Milk?

Now you know that german shepherds can drink milk, and if you give it to them in small amounts, it could provide some small health benefits.

However, caution is key, and if you notice any signs of allergic reaction or weight gain you should stop giving them milk.

On top of this, goats milk is probably your best choice, but cows milk is fine too.