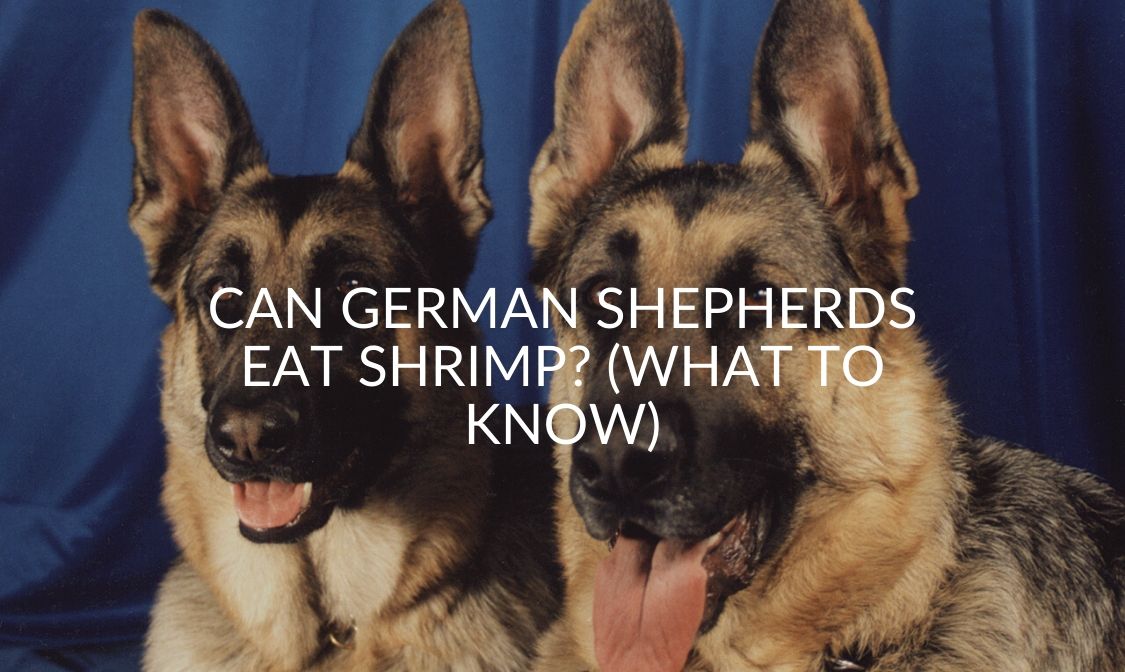 Can german shepherds eat shrimp? If you’re wondering what human food you can feed your german shepherd, at some point this is probably going to come up.

So keep reading to find out whether you can give your german shepherd shrimp. And more importantly, whether they’re good or bad for them as well.

Yes, german shepherds can eat shrimp. However, they shouldn’t only be fed to them in moderation and they definitely shouldn’t be the main source of nutrition in their diet.

Are Shrimp Good For German Shepherds?

There are a number of different reasons shrimp are good for german shepherds. They contain phosphorus, Vitamin B12, Vitamin B3, and antioxidants.

But what makes each of these so good?

As well as containing essential nutrients they’re also low in calories. This means if your german shepherd is on a diet, they can be a great low-calorie treat.

(Do you ever wonder if your german shepherd can drink milk?)

Are There Any Risks Associated With Shrimp?

Although shrimp can be a great treat for your german shepherd, there are some risks associated with them as well. Here are all the downsides you should consider before giving your dog shrimp.

The Shell And Tail

If you’re going to feed your german shepherd shrimp, make sure you avoid giving them the shell and the tail.

Both parts are tough to digest and could get stuck in your dog’s intestinal tract. As well as this, they can be more of a choking hazard compared to the rest of the shrimp.

So always remove the shell and tail before feeding them to your pup!

Risk Of Contamination From Toxins

In some cases, there’s also the risk of contamination from toxins. And some of these toxins can even survive being cooked at high temperatures.

If your german shepherd does eat certain toxins then they could suffer from neurological problems, digestion problems, and paralysis. However, fortunately, the good news is, the chances of this happening are slim.

It all depends on you as the owner what you decide to do.

With any sort of meat, especially seafood, there’s always the increased risk of food poisoning if shrimp aren’t cooked correctly.

If your german shepherd is suffering from food poisoning you may notice, vomiting, diarrhea, and signs of nausea.

Always take them to the vets when you see any of these symptoms and you believe it’s because of food poisoning.

(Should you feed your german shepherd raw meat?)

Can German Shepherds Be Allergic To Shrimp?

German shepherds CAN be allergic to shrimp so you need to be careful when you give them shrimp for the first time.

If it’s only a mild allergy then you may notice that your german shepherd seems to have itchy skin and can’t stop scratching.

When the allergic reaction is more severe you may also notice vomiting, diarrhea, and gassiness.

And when the allergy is extremely severe loss of consciousness, choking, coughing and even death can occur.

So remember, if you notice ANY symptom of an allergic reaction in your german shepherd, make sure you take them to the vets ASAP.

And if you’re not sure whether you should feed your german shepherd shrimp, consult your vet as well.

If you feed your german shepherd raw shrimp they’re more likely to suffer from food poisoning as well as giving food poisoning to your family. And they’re also at a higher risk of choking as well.

Should You Feed Your German Shepherd Fried Shrimp?

As well as not giving your german shepherd raw shrimp, you should also avoid giving them fried shrimp as well.

Any sort of fried food is going to be filled with fat and extremely high in calories. Not only are they going to increase your german shepherd’s cholesterol and weight, but they’re also going to be detrimental to their health.

So fried shrimp should definitely be avoided.

What Other Shrimp Should German Shepherds Avoid?

As well as avoiding fried shrimp you should avoid giving your german shepherd any shrimp that has been altered. For example, shrimp in sauce, breaded shrimp and shrimp cocktail should all be avoided.

There are two reasons for this. First of all, it can be hard to know exactly what’s in the other ingredients. So you could unknowingly poison your german shepherd.

Secondly, once again, they’re extremely unhealthy for your german shepherd and most likely to lead to weight gain.

In a lot of cases, the excess salt alone can be bad for your german shepherd’s health.

How Should You Feed Shrimp To Your German Shepherd?

When you’re feeding shrimp to your german shepherd, you should either steam them or boil them.

Before doing this, however, wash them thoroughly. As well as washing them thoroughly make sure you buy them from a store where no other additives have been added.

And remember don’t be tempted to add any flavorings to the shrimp!

Lastly, before giving your german shepherd shrimp make sure they’ve cooled down! Your dog will happily wolf them down before realizing how hot they are, and you don’t want them hurting themselves.

How Much Shrimp Should You Give Your German Shepherd?

As a rule of thumb, only 10% of your german shepherd’s diet should be treats. The other 90% should be their standard diet.

However, that doesn’t mean you shouldn’t vary the amount of food they’re getting. 1-2 shrimp a day should be enough for your german shepherd. And make sure you’re not giving them more than half a cup a week.

For best results, you should replace some of their usual dog biscuits or treats with shrimp.

And most importantly, when you’re feeding your german shepherd shrimp if you notice any signs of discomfort or digestion troubles, stop feeding them shrimp immediately.

Is Shrimp The Best Choice & What Are The Alternatives?

As far as shellfish go, there’s no real difference between what you plan on giving them. As long as you make sure they’ve been washed properly and you don’t give them things you’ve found on the beach you’re going to be fine.

However, if you didn’t want to give your german shepherd shellfish, there are some great alternatives.

Sardines, salmon, and tuna are all great sources of fatty acid and all make great treats for your pup! Once again, when you plan on feeding your german shepherd treats, stick to treats being 10% of their max diet.

Now you know that shrimp can be an excellent treat for your german shepherd when given in moderation.

Here are some of the other main points to remember.