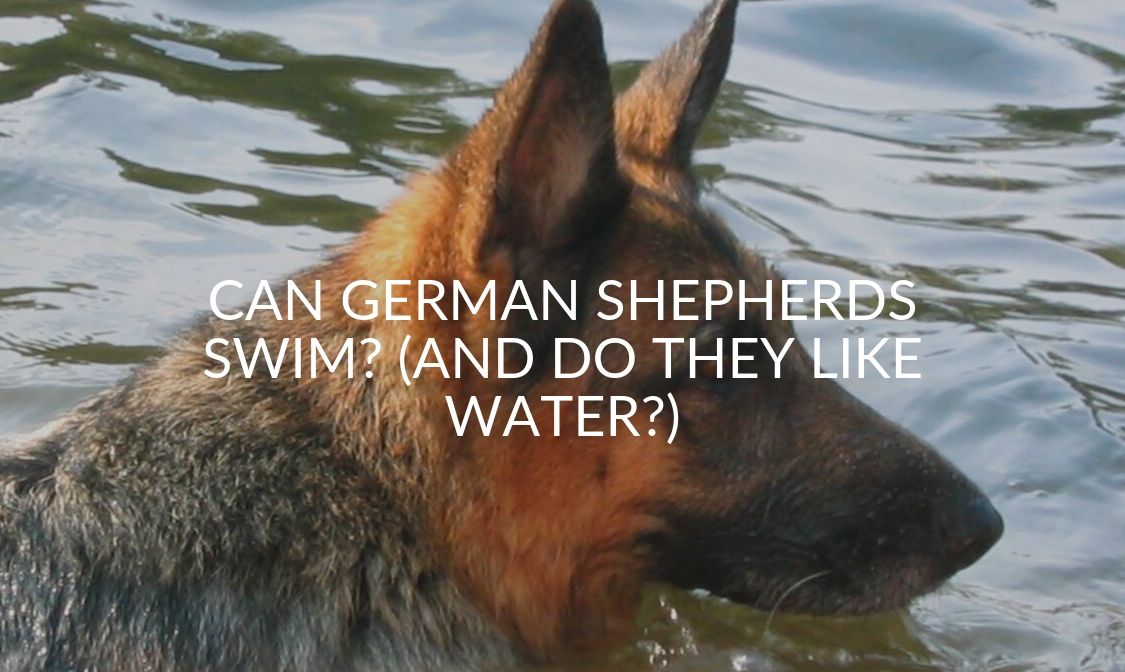 Whether a german shepherd likes water or not really depends on the individual. Some german shepherds love it and others, while fearless in many other circumstances are terrified of water.

Maybe there was a past event in a german shepherds life that has made them hate water. But in a lot of cases, they may just be scared without any actual cause.

In general, due to their high levels of energy, most german shepherds tend to like water. However, if yours doesn’t, this is also perfectly natural and nothing to worry about.

Once again, this depends on your german shepherd. Some can swim fine, some can stay afloat, but not swim properly. And unfortunately, some just can’t swim at all.

However, one thing is for certain, all german shepherds have the ability to swim. So if you’re german shepherd can’t swim yet. Don’t despair! Not only can they learn to swim, but in the process, they’ll also learn to love it.

(Find out whether huskies can swim!)

While german shepherds weren’t bred to swim, they actually become pretty efficient swimmers once they’re confident. And there are a few reasons behind this.

They Have Long Legs

First of all, they have long legs. Dogs with long legs find it a lot easier to swim compared to dogs with short legs. With the extra muscle on their legs, they’re able to get more power in each stroke, which helps them to stay afloat as well as move around.

They Have Webbed Feet

Most people don’t know this but german shepherds have webbed feet. Webbed feet are another great characteristic of good swimmers. They act as a paddle, allowing your german shepherd’s paws to make up more surface area which means they’ll be able to swim easier.

(Find out more about a german shepherd’s webbed feet.)

They Have Long Snouts

You may be wondering why a long snout makes a dog a better swimmer. Well, it’s because it means they can breathe a lot better.

A problem with a lot of dogs such as pugs and French bulldogs is that they struggle to breathe. Their nasal passage isn’t big enough, and they simply can’t get enough air in.

German shepherds, however, don’t have this problem because their snout is nice and long, allowing them to get more than enough air.

German shepherds are also naturally lean, strong dogs. Obviously, the more muscle they have the easier it’s going to be for them to swim.

They Have A Double Coat

Have you ever really tried to wash your german shepherd? If so you may have noticed how hard it is to get the water to penetrate their fur. This is because they have a double coat.

The double coat has two benefits. The outer coat acts as a water repellent, which means they can move through the water easily, while also not becoming too weighed down as their fur becomes wet and heavy.

The inner coat acts as insulation. It’s going to help keep your german shepherd’s body warmth in, so they’re not going to get too cold when they’re swimming.

(Has your german shepherd got a sensitive stomach? Find out what to do!)

So Why Aren’t They German Shepherds Natural Swimmers?

Well, it’s simply because they haven’t been bred to swim. German shepherds have been bred as herders and guarders so it’s not in their nature to swim.

When you compare them to labradors that have been bred to retrieve, it becomes a lot more obvious why they aren’t natural swimmers.

How To Help Your German Shepherd Become A Swimmer

Realistically, there’s no real reason that your german shepherd needs to swim. However, it can still be good to teach them.

Here are a few things you can do to help your german shepherd become a great swimmer!

(Want to know whether border collies can swim.)

Don’t Throw Them In The Deep End

You’ve probably heard the saying before, but throwing your german shepherd in at the deep end may be the worst thing for them.

And the moment they enter the water completely, praise them lots.

If you just force them into deep water then the chances are you’ll end up traumatizing them and they’ll be even more resistant to water.

Go In With Them

Nothing’s going to make your german shepherd more confident than when you enter the water with them.

Your german shepherd trusts you and if you’re in the water the chances are they’re going to be a lot more likely to jump in as well.

And once you’re both in the water, it’s also going to be a lot easier for you to make sure they’re swimming okay as well.

Buy Them A Life Vest

If your german shepherd isn’t a strong swimmer you can buy them a life vest to make sure they’re going to stay afloat.

These are great in the early days when they’re still learning to swim and you can often pick them up for a good price off Amazon.

If you’ve never let your dog swim before it’s probably a good idea to buy them a life vest first.

Try To Get Them In With Treats

Another great way to get your german shepherd to start swimming is by using toys and treats to get them into the water.

If your dog loves playing fetch, oftentimes they may begin swimming to get any toys that you’ve thrown in for them. You can also reward them with treats every time they go into the water. They’ll soon begin to associate water with a positive experience.

Once again, you can also go into the water, and if your dog is still reluctant to join you, offer them a treat to get them to come.

Give Them Lots Of Praise

You should always be giving your german shepherd lots of praise when they’re doing something positive. And this is especially true when you’re trying to get them to go into the water and start swimming.

No matter how small the steps may seem to you, make sure that you’re giving them lots of praise. The more you do this, the more they’ll begin to associate it with positive experiences and the more they’ll want to start swimming.

Start With A Paddling Pool

If your german shepherd is absolutely terrified of swimming then it can be a good idea to start with a paddling pool.

Get them to enter the pool before filling it with water. Get in with them and keep them in the pool with treats and toys. Once the pool is full, sit with them until they’re comfortable in it.

This mild form of introducing them to water is a great first step in getting them to swim.

(Have you noticed that your german shepherd smells? Find out why it happens and what to do!)

What Water Is Best For Your German Shepherd To Swim In – Chlorinated, Salt Or Fresh

When you’re letting your german shepherd swim, you need to take into consideration what type of water you want them to swim in.

In the beginning, freshwater is the water you should choose. When your german shepherd is learning to swim they may end up swallowing lots of water.

Saltwater is probably the worst choice for a dog that can’t swim. As well as salt poisoning which can cause dehydration, seizures and brain swelling, the waves of the ocean are also going to make it harder for your german shepherd to swim.

This is also the reason you shouldn’t play fetch in chlorinated or salt water.

German Shepherd Water In The Ear

If you’re letting your german shepherd swim, you need to make sure they’re not going to get water in the ear.

It’s not likely to happen as your german shepherd can normally remove it by shaking their head or tilting their head.

However, in some cases, this isn’t possible and you’ll have to take them to the vets to get it removed.

The following symptoms will likely be present when your german shepherd has water in their ear:

(Find out why your german shepherd drools and what to do about it!)

What To Be Cautious About When Letting Your German Shepherd Swim

Make Sure The Water Is Clean

Don’t let your german shepherd swim in water that seems polluted. If you notice lots of rubbish floating on the top of the water then it’s best to avoid. As well as rubbish and pollution check to make sure there’s no algae either.

It’s normally best to let them swim in flowing water as it’s less likely to be polluted or stagnant.

Even in freshwater its still best that you don’t let your dog drink the water. It can often be full of bacteria that will give them an upset stomach or make them sick.

If your dog is going to drink the water then take them somewhere the water is really clean and flowing well.

Don’t Let Them Spend Too Long In Chlorinated Pools

Even if your dog does drink the water in chlorinated pools you still shouldn’t let them spend too long in there. Chlorine will begin to irritate and hurt their eyes over time as they’re a lot more sensitive than ours.

Check To Make Sure It’s Safe

Lastly, check to make sure the area your dog is swimming in is safe. If it’s by the sea and it’s too rough, it may be best to avoid it. Likewise, freshwater that has strong currents may not be the best idea either.

And look for any objects that could cause damage to your dog when they’re swimming or if they’re jumping in.

So as it turns out some german shepherds like water and to swim, while others don’t. But fortunately, with enough care, training, and love you can help your german shepherd love water if they don’t already!

Here are a few of the main things to remember from this article.

If you follow the information above you’re going to have a german shepherd that loves to swim! If you have any more questions leave them in the comments below, otherwise, have a great day.