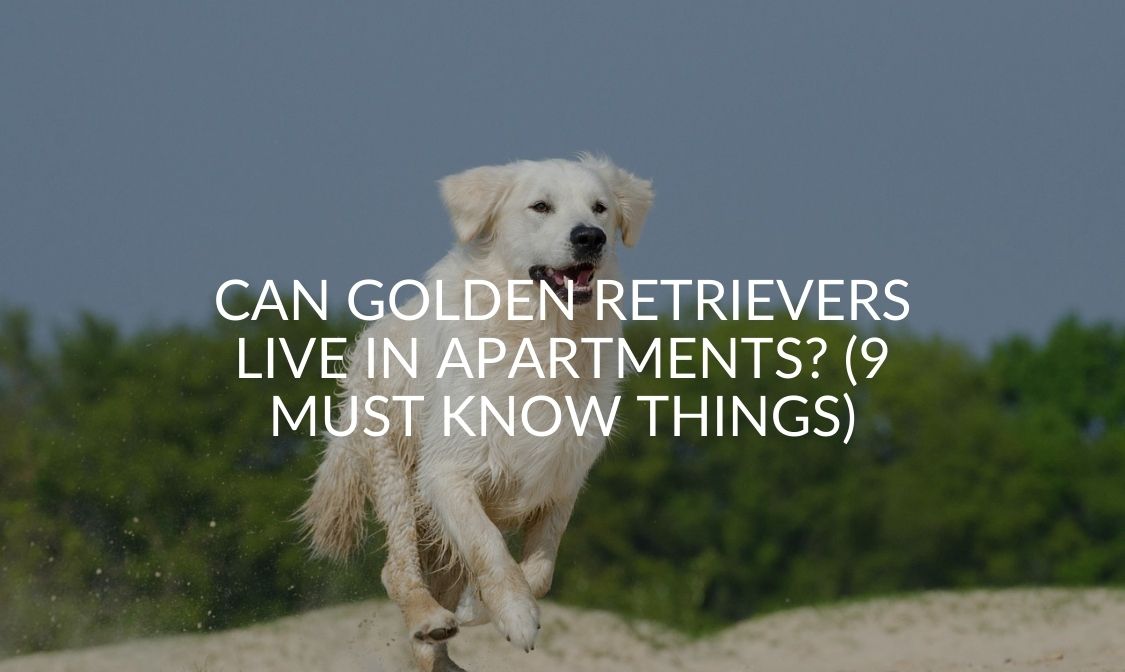 Golden retrievers are such fantastic dogs, and it’s no wonder you want to make one a part of your family! However, with that being said, if you live in an apartment you may be wondering “Can golden retrievers live in apartments?”

Well rest assured after reading this article, you’ll find out whether or not they can live in an apartment. Not only this, but you’ll also learn some must known facts before you even consider it!

So, Can Golden Retrievers Live In Apartments?

There’s no denying that the bigger the house, the more room your golden retriever will have to run and play. But that doesn’t mean golden retrievers can’t live in apartments!

So yes, golden retrievers can live in apartments. It’s important to remember that it’s not neccessarily about the size of the apartment, but whether or not you can give them enough of your time, and exercise them regularly!

These are the two fundamental keys to keeping them happy.

What To Remember Before You Move Your Golden Retriever In!

Before you decide to move your golden retriever into your apartment. There are a few things you’re going to need to remember. Without baring these in mind, it may not be a smooth transition.

Remember How Big Golden Retrievers Are

One important thing you’ll need to remember is how big golden retrievers are. They’re classed as large breed dogs, and you can expect the males to grow up to 75 pounds. No matter how calm and gentle they are, in small spaces, they’re still likely to end up breaking things, particularly when they’re playing.

While this definitely isn’t a deal breaker. It’s something that’s worth thinking about.

As well as being big dogs, they’re also quite energetic as well. This goes back to their roots as they’ve been bred to retrieve game (as you can guess from their name). While they’ll generally calm down as they get older, the first few years they’re definitely a handful.

If they don’t have the room to expend their energy or they’re not getting exercised enough, then they may end up destroying things in your home when they get bored and restless.

(If you’ve got a golden retriever find out why you should never shave them!)

They Need To Be Around People

You shouldn’t leave golden retrievers anymore than 6 hours a day. And even 6 hours is pushing it. So if this is the case, then they may not be a suitable dog for you.

Letting Them Go To The Toilet

Obviously, if you’re living in a flat it’s going to be a lot harder to let your dog out to go to the toilet. You can’t just let them out into a garden when they want to go, in fact, you may need to take them for a walk. While it doesn’t seem like a big deal now, remember when they’re still a puppy it may involve doing this in the middle of the night!

Fortunately, there are indoor toilets you can get for your pup! However, it may take a while for them to learn how to use them. And if your apartment is small, it could end up being filled with a bad odor.

Golden retrievers shed. And they shed a lot. If you plan on keeping one in an apartment then you’re going to have to be ready to vacuum constantly. While there are things you can do to deal with shedding, make no mistake, fur will be everywhere.

(If you want to know more about how much golden retrievers shed, then check out this article.)

They Can Be Chewers

While this isn’t aimed at people living in apartments specifically. It’s important to remember that golden retrievers are known to be chewers. While this most often occurs while your golden retriever is a puppy, it can follow through to adulthood.

If they’re not getting enough exercise, they’re being left alone too long, or their mind isn’t stimulated enough, it’s even more likely to happen as well.

Is Your Apartment Dog Friendly?

None of the above is going to matter if your apartment isn’t dog friendly. Some apartments don’t let any animals live within them, some don’t mind small animals, and some are happy with any animal!

Before you even consider buying your golden retriever, it’s something you’re going to need to check with your landlord.

As well as that, be aware that some of your neighbours might not show the same enthusiasm for your pup as you do. If your golden is noisy, or ends up barking all the time, then you may have noise complaints to deal with. (Fortunately, it’s not overly common for golden retrievers to bark.)

You May Lose Your Security Deposit

They Can Suffer From Separation Anxiety

Lastly, your golden retriever can suffer from separation anxiety if they’re left alone too long. This can cause them to bark, whine, cry, chew things up and destroy things. None of which you want for your apartment.

Fortunately, though, depending on how nice your neighbours are, they may even check in on your pup throughout the day so they don’t feel so alone!

Top Tips For Raising Your Golden Retriever In An Apartment

If you’re still set on moving a golden retriever into your apartment, here are some great tips for making the transition as smooth as possible!

Make Sure The Apartment Is Safe

The most IMPORTANT thing you can do is to make sure that your apartment is safe for your pup. Obviously, make sure that there’s nothing they can eat or bite that they shouldn’t. But also, make sure that all your balcony and windows are dog proof and safe, especially when you’re on a high floor.

Give Them Plenty Of Mental Stimulation

A good way to combat their boredom when you’re not around is to make sure they have plenty of mental stimulation. For example, giving them puzzle toys to play with like KONG’s can keep them entertained for hours.

When you’re with them try playing with them, training them, and teaching them tricks as well! All of which are going to keep their mind stimulated and active.

And remember, they’re probably going to get bored of seeing the same surroundings all the time. So if you can, take them to lots of different places!

Let Them See The Whole Complex

If possible, you should try to walk them around the entire apartment complex. This way they any noises they seem strange will be understandable to them, and it’s a lot less likely they’ll end up barking or getting nervous because of it.

(Have you ever wondered whether your golden retriever will make a good guard dog?)

Set Up A Routine For Them

Having a routine in place is going to reduce the chance of them wrecking your apartment, and it can also make them a lot happier. When thinking about your routine, it’s often good to exercise them in the morning. This way, they’re going to be tired throughout the day so it’s a lot less likely they’ll get into trouble while you’re away.

As well as this, you could also try and get someone to pop in midday to make sure they’re okay and spend some time with them.

My dogs absolutely LOVE this, and I think it may even be the highlight of their week. We hire a dog walker to come and take our dogs once a week. Not only do they get to go somewhere new every week, but they also get to meet lots of other dogs as well.

If you have a little bit of extra money to spend on them, this is probably one of the best things you can buy! And it’s often a lot cheaper than you think.

Training your golden retriever is paramount. Not just to keep your apartment safe but to keep them safe as well!

If you haven’t trained your golden retriever properly, then this is the perfect time to start. Whatever bad behavior your retriever has, whether it’s barking, chewing, or other bad behaviors, using the right training program is the key to having an obedient and happy pup.

Just imagine how great it will feel to finally be able to leave your pup alone for a few hours without worrying about what they’re going to do. Instead, you’ll have the peace of mind that you have a well-behaved pup, and the boundaries you set for them, will always be there, EVEN IF YOU’RE NOT.

Make Sure All Their Vaccines Are Up To Date

A lot more people are going to be walking in and out of your apartment complex than they would your home. This means there’s an increased chance of parasites and viruses being walked in as well!

So make sure that your golden retriever has had all of their vaccines or they may end up with an unknown illness!

Now you know that not only is a golden retriever a viable option for your apartment, but there are also tons of ways you can make it work! So if you weren’t sure before, hopefully you have the clarity and peace of mind to go for it! Just remember, that the most important things are making sure they’re getting enough exercise and that you’re spending enough time with them!

If you liked this article, check out the rest of the website. Otherwise have a great day!