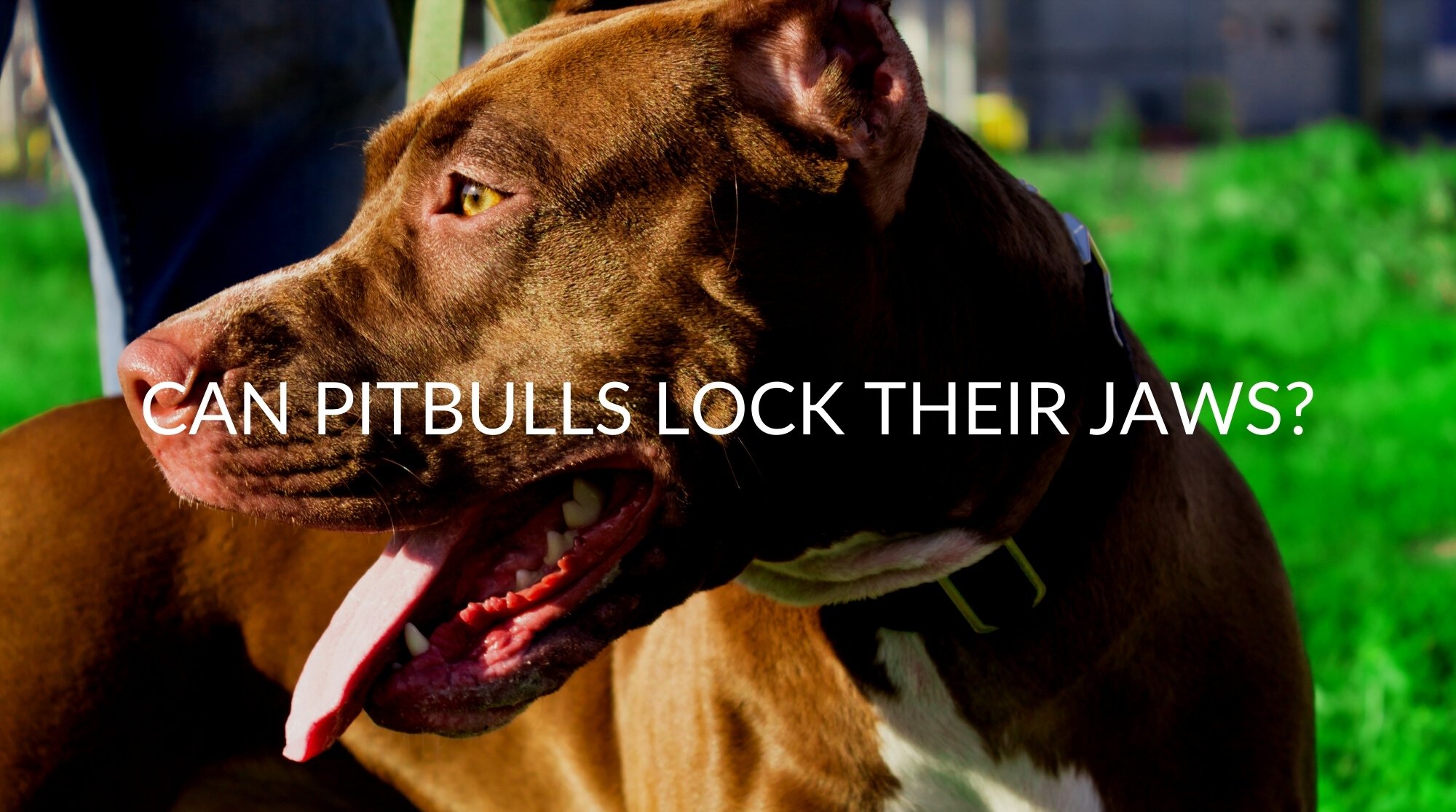 Pitbulls have had a pretty bad rap within the canine community for being overly aggressive, quick to bite, and often to keep biting, i.e., lock their jaws. Fortunately, people are becoming more educated on the breed and the dogs themselves, and many have realized that Pitbulls are not more combative than any other breed if they are raised in a safe and kind household.

However, the rumor that Pitbulls’ jaws can lock on once they bite is still widely believed. So is it true?

Pitbulls cannot lock their jaws. In fact, no dog’s jaw should lock. If it does, it’s because of a medical infection called Tetanus, and the dog should be seen by a veterinarian right away.

If the answer is so easy, why do so many people still think their jaws lock? Pitbull jaws often appear locked because they grasp onto objects, dogs, animals, or even humans, especially tightly. If you have a Pitbull or are looking into buying or adopting one, there are a few important factors you should be aware of in regards to their powerful jaws and specific temperaments.

Although Pitbulls’ jaws do not lock, they are extremely strong. However, people often assume that because they have such large and muscular jaws, that Pitbulls have the strongest bite of all canine breeds, but that is not exactly true.

Yes, the Pitbull makes the list of the top twenty most powerful dog breed bites, but they are not as high on the list as you might think.

Experts use the PSI scale, or pressure per square inch of a pound when measuring the strength of canine bites. On this index, the Pitbull measures in at 235.

Comparatively, a German Shepard has a PSI score of 238, while an American Bulldog is surprisingly even higher at 305. Even English Mastiffs and Rottweilers have higher scores than Pitbulls!

In fact, a Pitbull’s bite strength is less than half of that of the truly most powerful biter: the Kangal Dog, whose strength is an incredible 743 PSI.

Although many other pedigrees snap and snarl when they get aggravated, Pitbulls will most often bite, hold on tight, and then proceed to shake their heads side to side if provoked or excited.

Even though we know that a Pitbull’s bite force is not quite as strong as some other breeds, their proclivity towards holding and shaking whatever is in their mouths is what makes their bites so ferocious and potentially dangerous.

This tight grasp they keep, whether when they are playing or truly fighting, is why so many people believe their jaws lock. In addition to their big muscular jaws and their tendencies to hold and shake, Pitbulls are infamous for their stubborn personalities.

They often refuse to relinquish a favorite toy or couch cushion, but it does not mean they have locked their jaw. They are simply exercising their character traits with determination and, of course, strength.

It is a common misconception that Pitbulls are more prone to become aggressive and bite another dog or humans than other breeds, which is completely inaccurate.

Although they are often headstrong, every dog, whether a Pitbull or not, has its own distinct personality and will respond differently to each situation. A Pitbull is not biologically more likely to bite than any other dog.

How Do You “Unlock” a Pitbull’s Jaw?

It is now quite clear that their willful demeanor, powerful jaw, and inclination to hold and shake are what make the Pitbull bite seem as though its jaw is locked.

Just because the jaw is not actually locked does not mean it isn’t extremely difficult to open once clenched.

If you are desperate for your Pitbull to release their bite, whether it is connected to your favorite shoe, another animal, or even a human, the recommendations are all the same.

The truth is, the best way to “unlock” a Pitbull’s jaw is to train them to respond to your voice commands. This requires quite a bit of foresight, and even if your Pitbull is extremely well behaved, it is important to plan for possible future altercations.

How To Safely Use A Break Stick

If you own a Pitbull, purchasing a break stick to have your house or car for emergencies could be an effective and proactive way to ensure you are ready if an incident occurs where your Pitbull bites and refuses to let go.

Break sticks should only be used as a last resort if your Pitbull has “locked on” to another dog, animal, or human and you need an immediate release.

In order to safely use a break stick, follow these simple instructions:

As we noted before, not all Pitbull experts recommend using a break stick. In fact, many state that they are dangerous to both the human user and the dog. In some states, break sticks are even illegal because of their connection to dogfighting.

So make sure to do your research first and find out if break sticks are legal in your area and that you know the pros and cons of using them, as well as how to safely use one in an emergency situation.

It is immensely important to note that break sticks are not to be used on other breeds. As we have learned, most dog breeds tend to snap when provoked repeatedly, so attempting to use the stick may result in the dog biting your hand instead of holding on to the tool.

Signs of Tetanus in Pitbulls

The idea that a Pitbull’s jaw can lock onto an animal, dog, toy, or human when aggravated or excited is just not true.

However, there is a slight chance that your Pitbull’s jaw has, in fact, locked, although it won’t happen while they are biting something. The jaw can lock only if the dog is sick, and the medical term is “lockjaw,” and it is a sign of an infection known as Tetanus.

There are several signs to tell if your Pitbull is experiencing lockjaw due to the disease.

If your dog is expressing one or more of these symptoms, they are most likely suffering from Tetanus.

You cannot unlock a Pitbull’s jaw yourself if they are experiencing lockjaw. Veterinarians recommend seeking professional help right away in order to catch the disease as early as possible.

Contrary to popular belief, Pitbull jaws do not lock in place automatically. If a Pitbull jaw appears locked, it is intentional and not involuntary.

Pitbulls, like every other dog, are not inherently violent, but they are intensely stubborn and strong compared to most dog breeds. If they feel a threat or get over-excited, they may respond by biting and refusing to release.

If you are a Pitbull owner, dog watcher, concerned parent,  you now know that there are safe ways to release a Pitbull bite, but no matter the method, it can be dangerous.

They are strong animals, and it is essential to always express caution when attempting to detach a Pitbull from its attachment, even if you know the dog to be typically docile and gentle.