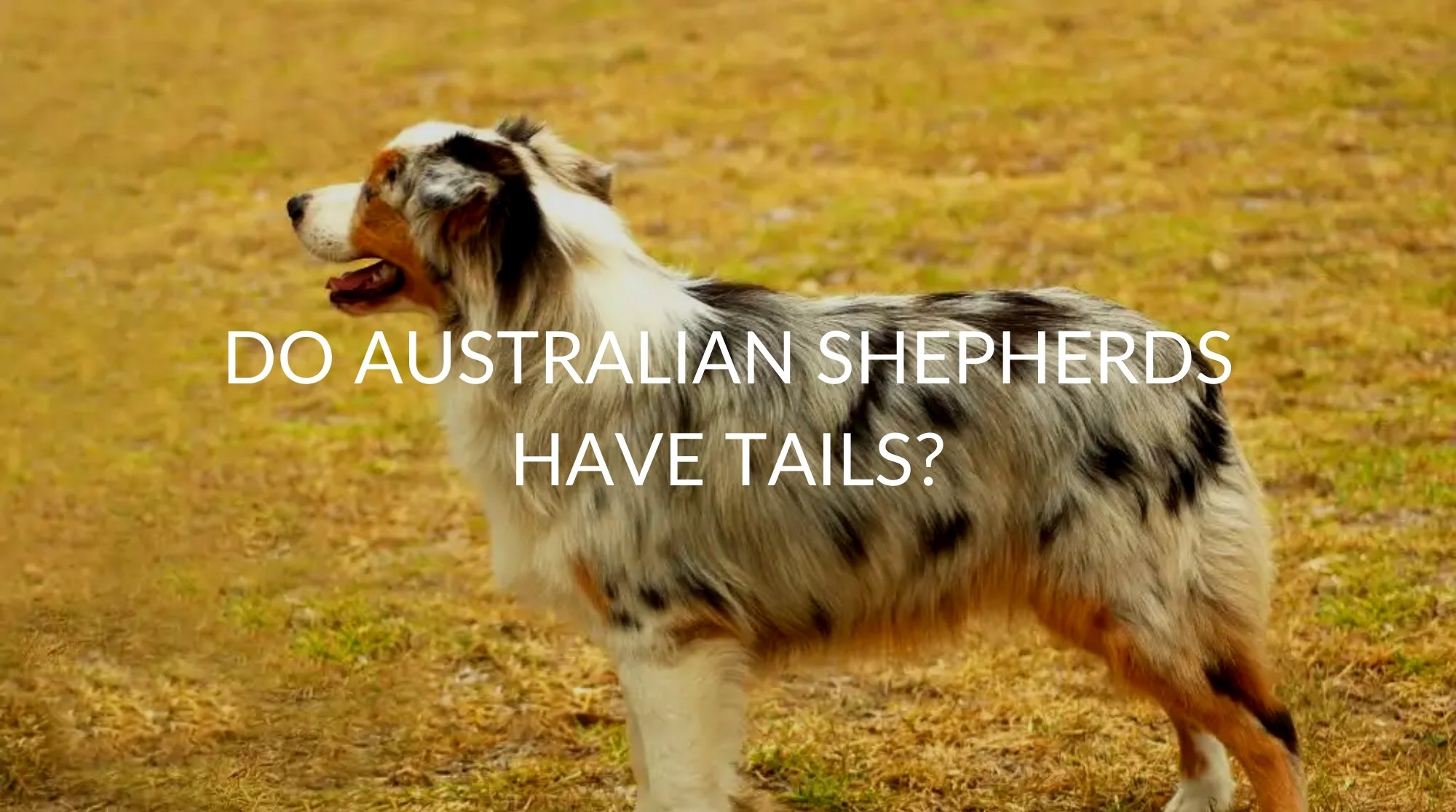 Tail or no tail? You have probably seen Australian Shepherds with tails and without tails. Have you ever wondered why some do have them and others do not?

There are many dog breeds with tails and other breeds born without tails. Genetically speaking no tails or bobtails are the minority. Most dogs we see without tails are either genetic anomalies, bred for short tails, or have had their tails docked.

Australian Shepherds have tails, but their tails can vary widely from dog to dog. Below we will look at the numbers relating to Aussies with tails versus those without tails. We will also look at the reasons for tail docking and against tail docking.

Do Australian Shepherds Have Tails or Not? Are Australian Shepherds Born With No Tail?

All Australian Shepherds are born with some form of a tail. Bobtail Aussies can be born with almost no tail or a tail of four to six inches. Aussies that do have tails can have tails of six or more inches. The length of the tail varies widely.

Why Do They Cut The Tails Off Of Australian Shepherds?

There are three main reasons they cut the tails off if an Australian Shepherd is born with a tail or born with too long of a bobtail.

The first and oldest reason is injury prevention. The second reason is good hygiene. Lastly, the third reason is the Australian Shepherd Standard.

Historically, Aussies were herding dogs. Having a tail was dangerous for herding dogs. A tail could be stepped on, injured, and broken.

In addition, tails would get stuck in bushes, briars, weeds, or shrubs. This impeded a dog’s ability to herd. Shorter tails prevented this. Feathered tails were especially bad at getting caught and that is a large percent of Aussies born with tails.

Owners of Aussies started by breeding for shorter and shorter tails. Tail docking became a thing to remove the tail and protect the dogs who were born with tails.

Breed Aussies with shorter tails or docking tails to make them shorter keeps that area clean. Dog tails can collect all sorts of debris from plants to feces. Shorter tails are less likely to collect unwanted debris.

People expect Aussies to have short tails or no tails, and many breeders dock the tails of Aussies who have regular tails or bobtails that are too long. Do Australian Shepherds Have To Have Their Tails Docked?

Australian Shepherds do not need to have their tails docked. However, it is not a black or white decision. Many reasons go towards making one decision or another.

If your Australian Shepherd will be continuing the time-honored tradition of herding hooved animals, it would be a good idea to have a Bobtail Aussie or an Aussie with a docked tail.

If you are planning to take your Australian Shepherd hunting or out into the woods, it might be a good idea to have a Bobtail or an Aussie with a docked tail.

The Australian Shepherd Standard means that if you want your Aussie to be a show dog, you will need a dog that meets the regulations. The regulations say an Aussie needs a tail of four inches or less to compete.

If you are against tail docking, look for an Australian Shepherd with a natural bobtail that is less than four inches. If you are planning to breed your own Aussies, it is important to note that breed to Aussies with Natual Bobtails will result in a dangerously high chance of dead or deformed puppies or puppies with major birth defects or health problems.

Countries where Docking is Illegal

There is a big debate going on about how Humane tail docking is. Due to the rate of birth defects, it is not possible to breed two bobtail Aussies, which means that about 50% or more of the litter will be regular tailed with one regular tailed parent and one bobtail parent.

After we looked at why tail docking happens, now we are going to look at why many countries are banning it and why people are beginning to question the ethics of Tail Docking.

For many years, people claimed that puppies didn’t have the nerves to feel the tail docking as it was done so close to birth. However, science and veterinary medicine contradict this belief.

In addition to the pain of the procedure, chronic pain can be a long-term problem. Dogs whose tails are docked may feel phantom pains in their missing tail. They may also feel pain in their remaining tail.

Added to this possibility is the fact that if it is not done properly, it can cause health problems and even death. Some countries allow restricted docking where only someone with a lot of experience can do the surgery.

Dogs use their tails as part of their greeting and socialization habits. You may notice even dogs without tails sniff around the tail area. In addition, tail wagging is a sign of friendship.

Tail positions and movement in a dog can indicate their friendliness or be a warning to others. Tail position can also indicate a dog’s emotions or feelings. Without their tails, body language in dogs is harder to read and accurately predict.

Incontinence is a rare side effect of tail docking. Tail docking can damage the muscles in that region making it harder for your dog to control their need to potty. This, in turn, can affect your life and ability to leave your dog alone for any period of time.

The AVMA has made a statement against tail docking.

The Canadian Veterinary Medical Association has also come out against tail docking and ear clipping.

The Council of the Royal College of Veterinary Surgeons (UK) has also made a statement against this cosmetic surgery along with ear clipping.

The Australian Veterinary Association is also against cosmetic surgeries that are ethically ambivalent.

As the debate carries on, more and more veterinary associations are getting on board and making statements opposing any form of cosmetic surgery for dogs. Considering the fact that dogs cannot really make the decision, they may be right.

The last things to consider are the morals and ethics of tail docking. Tail docking is essentially a cosmetic surgery. Think of it like getting a facelift or a nose job. We, as humans, can make the decision and pay the price.

Beyond that, this procedure can cause health problems, pain at the moment, and chronic pain— none of which the dogs chose for themselves.

Why Don’t Mini-Aussies Have Tails?

Mini-Aussies do have tails. They follow the same statistics as their full-size cousins. About one-quarter of all puppies are born with bobtails naturally. The other three quarters have regular-sized tails.

In this section, we are going to look at some common related questions about Australian Shepherds.

Why Do Australian Shepherds Wiggle Their Tails?

Tail wiggling is a universal sign amongst dogs that they are happy or excited. You will most likely see this kind of behavior when an Aussie sees someone they like. Your Australian Shepherd will greet you with a tail or whole body wiggle.

Why Do Australian Shepherds Have Eyes Of Different Colors?

The condition that causes a dog, or human, to have eyes of different colors is called Heterochromia. Australian Shepherds with Heterochromia will have one eye of one color and the other eye another color. Occasionally, you may even see two colors in one eye.

The most common colors you will see are brown, hazel, green, blue, and amber.

Australian Shepherds do shed. They are double-coated, which means that when springtime hits, they have to shed a lot to keep themselves cool in the summer warmer months. If you have allergies, an Australian Shepherd would not be the best choice.

Aussies are medium shedders during the summer and fall. They shed a little bit less in the wintertime. They are heavy shedders in the springtime.

Proper grooming and frequent brushing can help control the shed. In the spring, you should brush your Aussie every day. Brushing outside helps keep dander and fur from getting all over your home.

Australian Shepherds are considered one of the smartest dog breeds. They exhibit a number of characteristics that are used to measure intelligence.

Aussies are highly adaptable. This makes them great for families that move around a lot. Aussies are playful. Playfulness is a sign of intelligence; just look at dolphins.

Aussies are highly trainable. They were shepherd dogs long before they were house dogs. They needed to learn all sorts of commands. They can be trained to do many different tasks.

Aussies are great guard dogs. This is particularly important because they have to be able to recognize people or animals that are safe from those that are not.

Tails are an important part of a dog’s body. Australian Shepherds are born with tails. Sometimes we can see those tails. Other times the tails are so short they appear tailless.

Only one in four Aussies is born with a natural bobtail. Three out of four are born with regular tails. Tail docking is the procedure used to shorten Aussie tails to meet the standard.

As a dog owner or dog lover, it is your choice whether you support the cosmetic changes to Aussies. Should we make the majority look like a minority? Or should they be allowed to be as they were born?