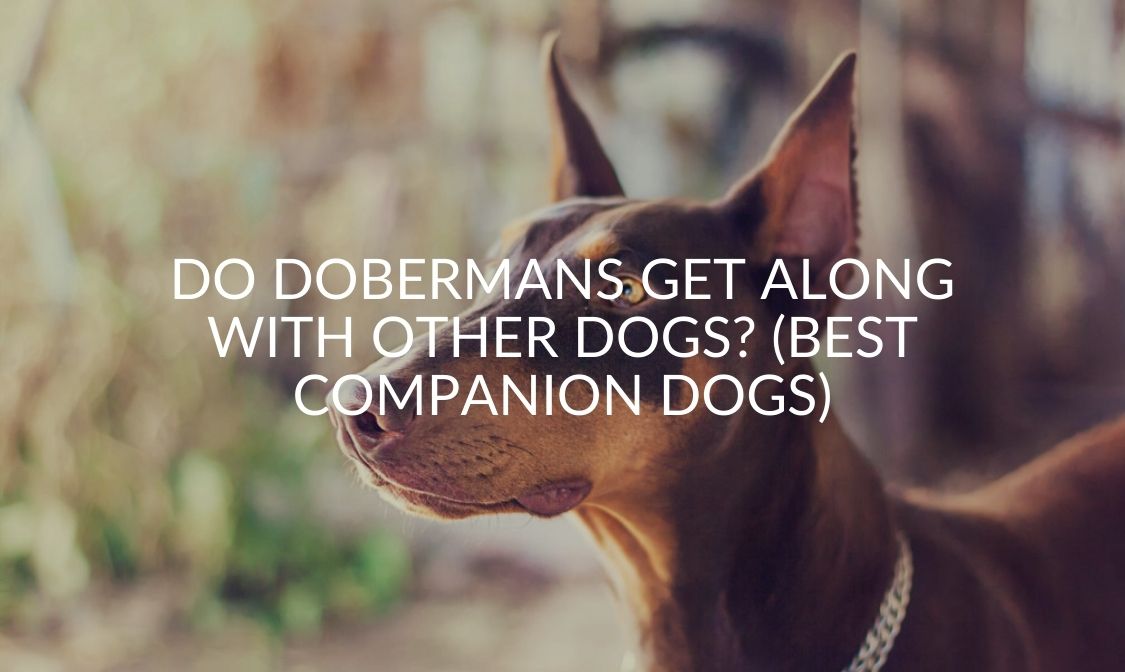 Dobermans are very intelligent and highly trainable. However, they are also known to become aggressive with other dogs when not trained to socialize appropriately. Most breeds in the medium to large size category can be a good pair for Dobermans. Avoid getting two unneutered males at the same age living in the same house.

The Doberman Pinscher, or simply Doberman, is one of the biggest dog breeds in the world. It can reach up to 100 pounds and is known as loyal, fearless, and extremely alert. Do Dobermans get along with other dogs?

Unfortunately, aggressive behavior can do happen when a Dobberman encounters other dogs. This is especially if the other dogs try to get more dominance within a known territory. But with early and sufficient training, Dobermans can get along with other dog breeds too.

Do Dobermans Get Along With Other Dogs?

Due to their athletic build and high intelligence, Dobermans are pretty famous and sought out for adoption. They are very people-oriented and affectionate with people and dogs that they consider as “family.” Dobermans are highly protective of their owners and the property they guard. It’s not surprising if they consider themselves the guardian of the house and the alpha of the pack.

However, if an unfamiliar “outside” dog wants to assert dominance, there might be a bit of a problem. Not all Dobermans are aggressive toward other dogs, but potential animal aggression is still likely to happen. They are also known for their instinct of chasing smaller pets like cats and smaller dog breeds. Any aggressiveness often occurs due to improper training (or lack thereof).

If you’re planning to get a companion to your Doberman, you might want to avoid smaller dogs with the “Small Dog Syndrome,” such as chihuahuas and terriers. And most importantly, make your Doberman socialize with other dogs early on. Choose a dog from the opposite sex to avoid possible problems in pack dominance.

You might also want to put your Doberman in upbeat obedience training. The obedience training should start preferably within the dog’s first year. This step is to ensure that your pet would be a lovely companion for you and your other dogs instead of being an aggressive and domineering pet.

Want To Train Your Doberman With Peace Of Mind?

If you haven’t trained your Doberman properly, then this is the perfect time to start. Whatever bad behavior your shepherd has, whether it’s barking at night or other bad behaviors, using the right training program is the key to having an obedient and happy pup.

Just imagine how great it will feel to finally be able to trust your Doberman completely and never worry whether they’ll be naughty or not. Instead, you’ll have the peace of mind that you have a well-behaved pup, and the boundaries you set for them will always be there, EVEN IF YOU’RE NOT.

With proper obedience and socialization training, any breed can get along with Dobermans. But due to their size, Dobermans might accidentally injure smaller dogs during playtime (or when agitated.) Smaller dogs might also not keep up with the Doberman’s endless energy. Medium to large-sized dog breeds can be a better Doberman companion.

Golden Retrievers are among the friendliest and most tolerant breeds in the canine world. It is a high-energy dog that will likely get along with other competitive and confident breeds like the Doberman.

Since they are also easy to train, they can be a training companion for your Doberman too. Because this breed is medium-size, your Doberman will be happy to find an exercise companion that needs as much activity as them.

Labrador retrievers are also known for their friendly temperament, as well as their unlimited energy. They are known for being support dogs but can also compete due to their high trainability. Labradors love to have a companion and like to play with their dog mates to release their pent-up energy.

However, this breed might also need to start in a puppy kindergarten to get comfortable with people and other dogs.

Belgian Shepherds or Malinois are herding dogs that often work at police and military. You need to handle athletic dogs (such as Dobermans) to take care of this breed. With high energy and exercise needs, they need to have physical activities like running, hiking, and biking. If you’re planning to adopt Belgian shepherds as your Doberman partner, introducing these two breeds as pups is preferred.

Another great candidate for a Doberman partner is the Alaskan Malamute. It is one of the oldest dog breeds and is known for its strength and stamina. Like Dobermans, the Alaskan Malamute has high sensitivity and is affectionate with other family members.

Early training and socialization will make them get along very well with other dogs and even indoor cats. Do note that both Dobermans and Alaskan Malamutes are prone to chasing smaller animals.

Siberian huskies and Alaskan Malamutes are very similar, and hence, they are good candidates for a Doberman companion. They are known as great escape artists and will happily make a demonstration when bored. Huskies are great at socializing with other dogs and other humans. Physical activities such as hiking and walking can be a shared exercise for Doberman and Huskies.

Even if there are no 101 dalmatians in the room, it can still be a bit rowdy when a dalmatian is paired with a Doberman. Dalmatians might get along well with male Dobermans due to their goofiness and high energy level.

This breed likes to be a part of the pack, which means that it’s less likely to get aggressive or assert dominance. Both breeds are known for being good guard dogs and will likely bark on strangers.

The English Cocker Spaniel got its name due to its history of hunting woodcocks, a wading bird in England. Just like Dobermans, they love good exercise and getting affection from their owners. English Cocker Spaniels, much like the Dobermans, are good guard dogs. They will usually bark when they sense danger but will not hesitate to attack when needed. English cocker spaniels do enjoy the company of other pets.

Great Danes are one of the biggest breeds of dogs. This breed is very gentle and is one of the dogs with a good temperament. The average weight for a male Great Dane is about 140 pounds. With their imposing stature and size, the Danes are intimidating guardians loyal only to their owners. You will often see them sleep with other dogs and smaller pets like cats.

Pup Danes might not keep up with physical exercises like hiking or jogging. But once their joints are strong enough, they can be as energetic as their Doberman counterpart. Both breeds enjoy obedience and agility activities or training.

Irish setters are sweet-natured, outgoing dogs known as tennis-ball fetchers. Because of their big builds, parents who usually own them are usually sportsmen. They add their pets into their daily exercise and practice.

Like Dobermans, the Irish Setters like spending time with their owners, especially during physical activities like canine sports, agility training, and tracking. Irish setters are bird hunters, so avoid getting this breed if you have a bird pet.

Saint Bernards are quite playful and curious, a gentle giant like Great Danes. These watchful dogs are very patient with children and other younger dogs. If you’re planning to get a Doberman pup, it will likely get along with a Saint Bernard sibling.

Saint Bernards doesn’t need many exercises, so it might not be able to keep up with a Doberman’sactivities. You might need to enroll your Saint Bernard pup in a kindergarten and obedience class.

Shetland Sheepdogs or “shelties” are guard dogs that are bred to help farmers in Scotland. They are also hard-working herd dogs and are affectionate with their owners. Shelties enjoy activities that get their noggins working, as well as making their owners happy. This breed prefers the company of its kind, but they immediately warm up with new dogs and breeds who are willing to play.

Much like Dobermans, Chow Chows are great companions for dogs raised with them during their puppyhood. Chow Chows should also be trained to socialize with other dogs if you want them to have their companions. Don’tpair them with Dobermans of the same sex because they might get aggressive with each other. Chow chows are also active and alert, making them another candidate as DDoberman’sguard dog partner.

Dobermans can become the best companion dog for humans. But due to their protectiveness, this breed is often viewed as “vicious” or aggressive towards other people or dogs. This is not the case for well-trained Dobermans, especially if the training starts during puppyhood.  These dogs are also full of energy and will need many exercises to stay healthy and avoid destructive behavior.

Are Dobermans Aggressive Towards Other Dogs?

Dobermans are friendly towards the other members of their family. They often get along well with puppies who are raised alongside them. They are also less likely to be aggressive with older dogs (preferably, with at least two years of age difference) already established in the living area.

Do note that two male Dobermans at the same age will likely not get along well and might become aggressive to each other. This is due to the breed’s instinct to be the dominant alpha in the pack. If you’re getting a partner for your dog, getting one of the opposite sex can minimize aggressive behaviors.

Is It Better To Have One Or Two Dobermans?

The only exception is when the two dogs are introduced when they are both puppies. Puppies tend to get curious about each other without getting rough and accidentally injuring their playmate.

Are Dobermans Good With Small Dogs?

Dobermans can get along pretty well with smaller dogs that don’t have a “Small Dog Syndrome.” But do note that Dobermans can easily injure a smaller pet due to their large stature. Make sure to encourage gentle interaction between the Doberman and the smaller dog to avoid any accidental injuries.

If possible, neuter the Doberman males to tone down the hormones that can get them a little bit excited when playing with smaller dogs.

Any dog can become aggressive when threatened or when afraid. This is just how natural the instincts can be when triggered by other dogs. And this is also true with Dobermans.