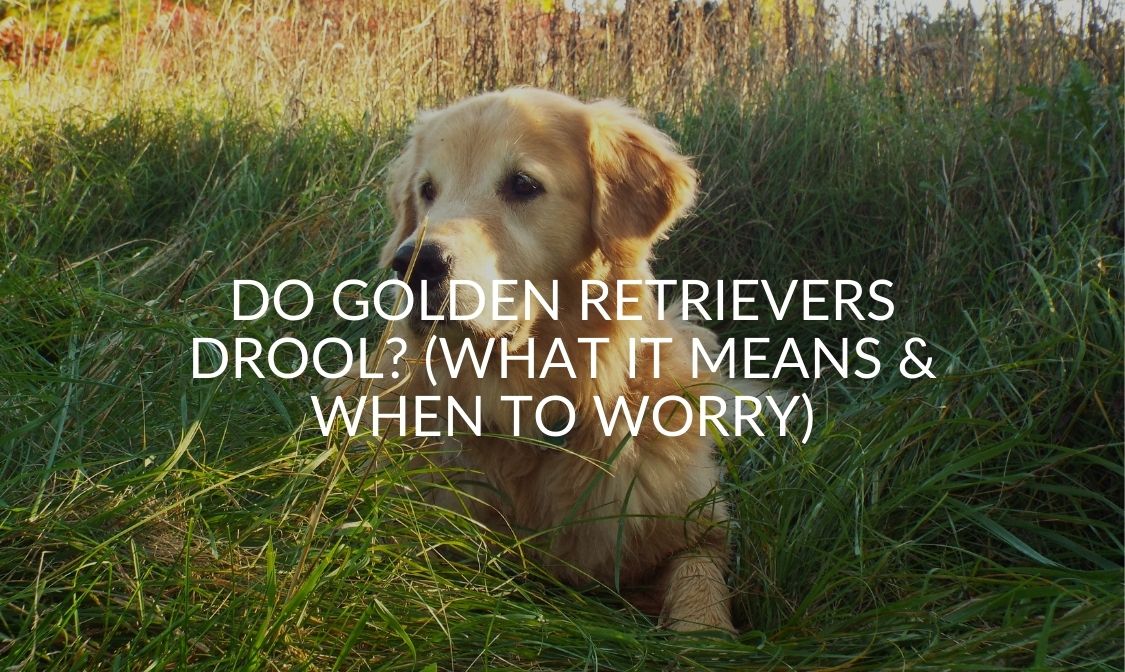 To be honest, golden retrievers don’t drool that much, especially when they’re compared to other dogs. However, this doesn’t mean they don’t drool. In fact, there are times when your golden retriever’s drooling is definitely to be expected. But if they’re drooling constantly, or you notice that they’re drooling a lot more than usual, it’s probably best to take them to the vets.

What Are The Most Common Reasons Your Golden Retriever Might Be Drooling?

As you know there are a whole bunch of reasons that your golden retriever might be drooling. Here are some of the most common ones.

They Think They’re About To Get Food

One of the most common reasons that your golden retriever is going to start drooling is because they know foods coming. We’ve all heard of Pavlov’s dogs, and it’s no different in your dog. Once they begin to anticipate food, they’ll begin salivating.

This kind of salivation is completely normal, especially if you’re making them wait for it. However, if you notice that there’s an extreme amount of salivation, it’s still a good idea to take them to a vet.

Another common reason that your golden retriever might start drooling is when they’re too hot. This typically happens after they’ve been for a long walk, or on a hot day. If it doesn’t happen, you need to make sure that they’re not suffering from heat stroke which can become fatal if left untreated.

When they are struggling with heat stroke they won’t just drool. You’ll also notice that they may vomit, appear faint, wobble, have a fever, and their tongue will become redder.

Something Has Become Lodged In Their Mouth

Sometimes damage can occur in your goldens mouth which causes them to salivate too much. If a splinter from their toy or something they’ve been chewing on gets stuck, then it’s going to cause them to salivate a lot more. But this isn’t the only cause.

As well as something being stuck in their mouth, there are also other dental problems that can cause this to happen as well. Chipped and damaged teeth, tooth decay, and gingivitis can all make your retriever begin to drool a lot more.

You should check their mouths for any sign of trouble. As well as the damage listed above you should also check for bad breath, bleeding, and swollen gums as well. Behavior wise you’ll notice that they may be whimpering and crying as well as not eating.

So if you think there’s a problem or you’re not sure, then you should make sure that you take them to the vets.

Generally speaking, when your golden retriever is about to vomit, they’ll often end up salivating a lot more. One thing that can make your retriever want to vomit is motion sickness. If they’re in a moving vehicle, and they can’t see out, then they may begin to get motion sickness.

Once again, if you think that your dog is suffering from motion sickness then you should take them to a vet. Vets will often be able to give them medication that can cure their motion sickness.

When there’s a problem with your golden retrievers liver, then they’ll often begin to start drooling. And they’ll drool a lot more than usual. As well as drooling you may notice that their movements look a lot more awkward, and there may be a general malaise in their behavior.

It will be difficult to spot a liver problem in your golden retriever, which is one of the reasons it’s so important to take them to the vets if you notice they’re drooling excessively.

Unfortunately, this one is a lot more common than you might think. Golden retrievers are quite gutty, and they’re not afraid to eat anything. Perhaps it’s something that they’ve found in your house, or on a walk. Sometimes it could even be a poison plant.

Whatever the case, if you think that your golden retriever has been poisoned you should take them the vet IMMEDIATELY. Their condition may deteriorate rapidly, and the earlier their treated, the better the prognosis will be.

Problems With Their Digestive System

There May Be Nerve Damage

If there’s a tumour or some other sort of damage in your dogs mouth then it may cause them to start drooling. When there is nerve damage inside their mouths you may also notice that they’re unable to close their mouths properly and in more extreme cases their other facial muscles might stop working too.

(Have you noticed your golden retriever sheds a lot? Check out these 18 tips for dealing with it!)

Bloating may not seem like a big deal, but if your dog has it you’ll need to take them to the vet ASAP. Bloating is life threatening to all dogs and there are a number of reasons it can happen.

If you think your dog is suffering from bloating as well as drooling, you’ll also notice that their abdomen looks bloated as well.

Eating too quickly, only eating one meal, exercising after eating, drinking too much, and eating things they shouldn’t .

While it’s not overly common in golden retrievers it does happen. If they’re becoming extremely excited or anxious they could begin to drool as well.

Lastly, there’s definitely a small chance that your golden retriever is suffering from rabies. Normally, you’ll have to give your dog a rabies vaccine if they’re in an area where it’s known to exist.

If you’re scared about rabies then you can speak to your vet about getting a vaccine, and they’ll tell you if it’s worth getting one in your specific area.

What Should You Do If Your Golden Retriever Is Drooling?

When your golden retriever is drooling, you should definitely figure out what’s causing it and then do some of the following to help them stop.

Take Them To The Vets

First of all, if you’re worried about your golden retrievers drooling, or it seems excessive or not right you should definitely take them to the vets. While this article can give you a rough idea about what’s causing drooling, the advice will never be as good as a vet.

They’ll be able to figure out exactly what’s going on with your retriever and give you the treatment they need to stop.

If your golden retriever is drooling because they’re getting too hot, you should also do everything you can to keep them cool. After a long walk, make sure there’s nice cool water for them to drink. You can also put a paddling pool in your garden and provide them with plenty of shade.

Lastly, avoid taking your golden retriever out during the hottest parts of the day too. It’s not uncommon for them to die of heatstroke if you do this, and they can even burn their paws on the floor too. As a general rule of thumb, only walk them during the morning and evening.

(Have you ever wondered whether golden retrievers bite, and why they do it!)

Keep An Eye On Them

This is easier said than done. But you always want to try and keep on eye on your pup to make sure they’re not eating anything they shouldn’t be. If you have dangerous chemicals in your house you need to make sure they’re well out of reach and sight from your retriever.

Retrievers are very curious, and if they want to get something they’ll most likely find a way.

As well as this, you should only take them to places where you know there’s nothing dangerous they can eat. This will also help reduce the risk that they’ll eat something they shouldn’t.

Try To Keep Them Calm

If you’ve got an anxious pup you need to make sure that you do everything you can to keep them calm and happy. The trick is to find out what’s making them anxious, and then finding a way you can reduce this.

Oftentimes it’s going to be something in their environments such as loud noises or certain objects, but another big reason is separation anxiety. If they are suffering from separation anxiety then you may need the help of a professional to get them to stop.

When Should You Take Your Golden Retriever To The Vet Immediately

Here are some of the times you’ll need to rush your golden retriever to the vet ASAP. So if you notice any of the following symptoms make sure you don’t wait.

Have you ever wondered whether your golden retriever has a normal smell?)

Interested In Training Your Golden Retriever The Right Way?

If you haven’t trained your golden retriever properly, then this is the perfect time to start. Whatever bad behavior your shepherd has, whether it’s barking at night or other bad behaviors, using the right training program is the key to having an obedient and happy pup.

Just imagine how great it will feel to finally be able to trust your border collie completely and never worry whether they’ll be naughty or not. Instead, you’ll have the peace of mind that you have a well-behaved pup, and the boundaries you set for them, will always be there, EVEN IF YOU’RE NOT.

And if you liked this article, make sure you check out the rest of the website. Otherwise have a great day!