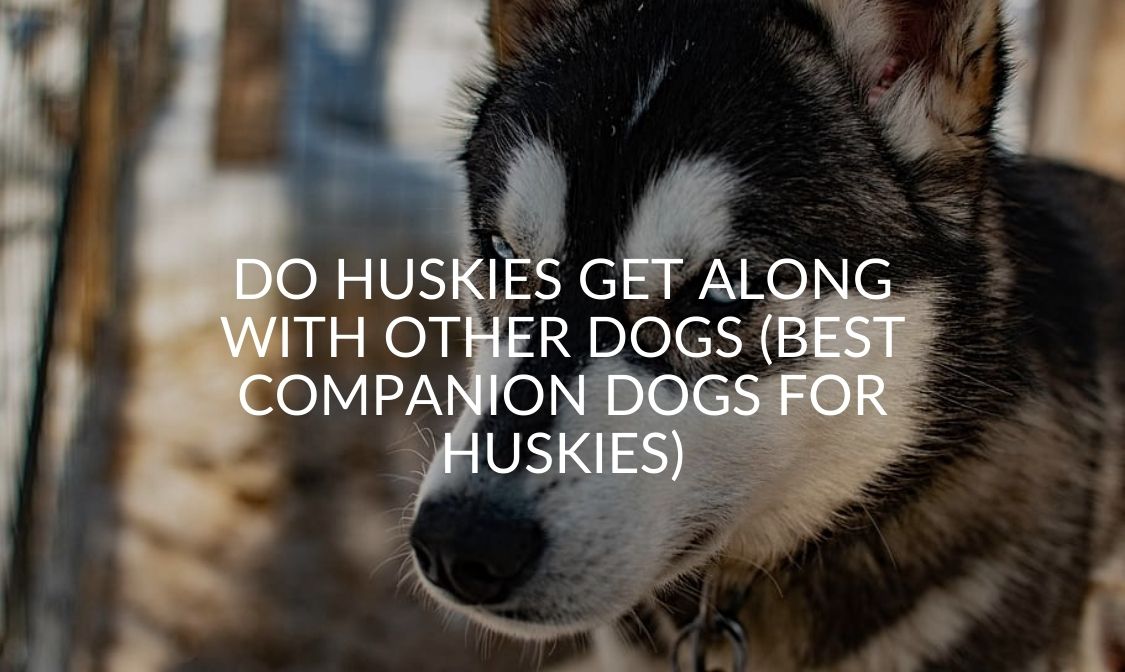 There is no such thing as having too many dogs, especially if you are a fanatic about canine cuteness! If you have a husky at home, you may be wondering whether do huskies get along with other dogs.

Though each dog is characterized by its individual personality traits, some traits are common for all the dogs of a particular species. Huskies are known to be bundles of energy that are tempered by their bold personalities.

If you’re thinking of getting a companion dog for your husky, it is important that you make your foremost priority to ensure that your existing dog is comfortable with the new member of the family. There are some dog breeds that are more likely to get along with your husky.

Here is a quick guide to help you make an informed choice when it comes to deciding on what dog you should get. Excited? Let’s go check it out!

Do Huskies Get Along With Other Dogs?

Huskies are social “pack” animals, which means that they generally like being around other dogs. However, irrespective of their natural inclinations, it is always a good idea to take your huskies to socialization classes to help them learn exactly how to interact with other humans and dogs.

It has been observed that despite their pre-existing social skills, huskies generally interact better with larger dogs instead of smaller ones. Moreover, they tend to get along better with dogs they have spent a lot of time with or have grown up with. Older huskies find it harder to learn to accept new dogs, especially smaller ones, in their immediate vicinity.

Want To Train Your Husky With Peace Of Mind?

If you haven’t trained your husky properly, then this is the perfect time to start. Whatever bad behavior your Shepherd has, whether it’s barking at night or other bad behaviors, using the right training program is the key to having an obedient and happy pup.

With Brain Training For Dogs, you’ll save yourself a ton of time and effort. Instead of banging your head against the wall trying to figure out why your dog won’t listen, you’ll follow a path that has been tried, tested, and most importantly, that’s given proven results. Not to mention the fact you’ll be able to fit the course around your schedule, not fit your schedule around a trainer or obedience class.

Just imagine how great it will feel to finally be able to trust your husky completely and never worry whether they’ll be naughty or not. Instead, you’ll have the peace of mind that you have a well-behaved pup, and the boundaries you set for them will always be there, EVEN IF YOU’RE NOT.

If you’re looking for great companion dogs for your beloved Husky or simply another dog to have at home, one of the most important things that you need to evaluate is its compatibility with your husky.

As mentioned previously, dogs have individual personality traits which make them unique, just like humans do. However, some general characteristics are shared by dogs of a particular breed, which makes it possible for us to predict how well they get along with other dogs.

Here are some of the dog breeds that are most compatible with huskies (in no particular order).

This adorable dog breed is known to be similar to the Siberian husky in terms of size as well as overall personality. The Australian Shepherd is incredibly playful, affectionate, and inclined towards fun and games. It has been observed that these dogs have loving dispositions, which means that they generally get along well with other dogs, children, and families in general.

Australian Shepherd dogs are extremely energetic and, like huskies, enjoy high-intensity activities that include running and frolicking around. Moreover, they are a breed of high intelligence which means that they are easier to train than most dog breeds.

Anyone who has ever spent time with a Labrador retriever knows that they are incredibly energetic and intelligent creatures. These dogs are quite similar in temperament and friendliness to huskies which makes them a great companion for the breed.

Labradors can match huskies in terms of their energy levels and exercise requirements, which means that they can play with your husky for a long time. Though Labradors require obedient training, the training is not very taxing or time-consuming due to their high intelligence.

This breed often comes as a surprise as German Shepherds are quite different from huskies. German Shepherds have greater intelligence and are extremely good at following commands, known particularly for their obedience. This is why German Shepherds, unlike huskies, make really good protectors and guard dogs.

What makes this breed compatible with huskies is the idea that German Shepherds are large dogs, which means they can stand their ground against huskies. Moreover, they have great endurance and stamina and are known for their high energy levels to match huskies.

Malamutes can make great companions for huskies due to the fact that they are considered cousins to the husky breed. Alaskan malamutes are larger than huskies, making them more likely to win a fight or hold their own against a husky. Though this breed can’t match huskies in terms of speed, they make extremely playful companions.

It is important to remember that malamutes are a stubborn breed, much like huskies themselves. Thus, training them might become a challenge at times.

Dalmatians are an extremely energetic breed, which their endurance levels and energy often surpassing that of the huskies themselves. Due to their temperament, intelligence, friendliness, and overall playfulness, the Dalmatian breed is the one considered extremely compatible with huskies.

Just like Labrador Retrievers, Golden Retrievers get along really well with huskies. They are extremely playful and caring dogs, known particularly for their low aggression levels, so chances of fights will be significantly lowered with a Golden Retriever around.

Though playful, this breed has a slightly lower endurance level when compared to huskies. However, their large size ensures that they won’t be pushed around by the huskies.

Boxers are one of the most compatible dogs in terms of energy levels with huskies. Boxers are basically exercise-demanding bundles that don’t enjoy sitting still or being left alone. This matches the socially inclined dispositions of the huskies themselves, which means that these two can be great friends.

Due to their preference for high-energy activities, pairing your husky with a boxer will definitely make it hard for you to have a moment of peace.

An English Pointer is considered to be an incredibly well-rounded dog that is well-behaved and generally easy to train. This breed is naturally very friendly and affectionate, which means that there is a high chance that it will get along pretty well with your precious husky.

Moreover, an English Pointer is known to have a high level of energy which makes it able to keep up with the daily exercise demands of a husky.

Many people are surprised to find poodles on the list of dogs that can get along well with huskies. Poodles are extremely energetic dogs that can match the natural friskiness of huskies with no qualms whatsoever. Their predilection towards rough play matches the wonderfully chaotic energy of huskies themselves, which means that these two can be friends and companions.

The tendencies towards mischief are present in both poodles and huskies, which means that they both require a firm hand in training in order to ensure they don’t drive you completely crazy with their rough antics.

It may not come as a surprise, but one of the breeds most likely to get along with your husky is another husky. It is through this manner that your husky will be perfectly matched in terms of friendliness, energy, temperament, and overall playfulness.

Do Huskies Get Along With Small Dogs?

If you want to introduce a smaller dog to a husky, it is preferable that your husky is of a younger age so that it has more time and a greater inclination to learn to get along with the smaller dog. Even then, it is essential that you keep a close eye on your dogs to make sure they don’t aggravate and hurt each other.

With that said, you should know that many pet owners and animal behaviorists do not recommend getting a smaller dog as a companion for your husky.

Do Huskies Kill Other Dogs?

Huskies have a high predatory instinct, which means that they are likely to attack and even kill other small dogs, especially if the smaller dogs display aggressive behavior. Huskies are large dogs that are inclined towards attacking anything small or furry, which makes small dogs an ideal target for the huskies.

If the small dog attacks back, chances are that the husky might get even more aggressive and end up killing the smaller canine with its teeth or through vigorous shaking.

How Do You Introduce A New Husky To Other Dogs

Introducing a husky to other dogs requires the same steps that need to be followed when introducing a new dog to a husky.

You first need to make sure your dogs are settled, attached to their leashes, and that you have a pack of their favorite treats at hand. It is important that the new husky that needs to be introduced is trained and calm and walks by on a leash by your assistant. Give your dogs a treat every time they demonstrate good, calm behavior and interact well with the new husky in the environment.

Repeat the behavior several times in one sitting, and then conduct the same exercise for the duration of a couple of days. As the dogs become used to having the husky around, make them interact for greater lengths of time with lesser restraints and supervision.

Is It Better To Have Two Huskies Or One

One of the prime characteristics of huskies is that they are highly social ‘pack’ animals. This means that it is always a good idea to have huskies in pairs as they are then less likely to develop cases of separation anxiety. Huskies that live in pairs are generally calmer and less anxious than huskies which are bred alone.

As you have seen, getting another dog is an exciting event, though there are several things you must consider if you already own one. One of the most important things to consider is to get a dog that is compatible in terms of temperament and individual traits with your pre-existing husky. Having dogs that do not get along with each other is really stressful not just for the dogs but also for the owners.

Research has shown that dogs such as Golden Retrievers, German Shepherds, Labradors, Boxers, and Poodles are generally congenial with huskies. It is thus a good idea to do your research before getting another dog. I hope this helps you find the perfect new canine companion for yourself and your precious husky.