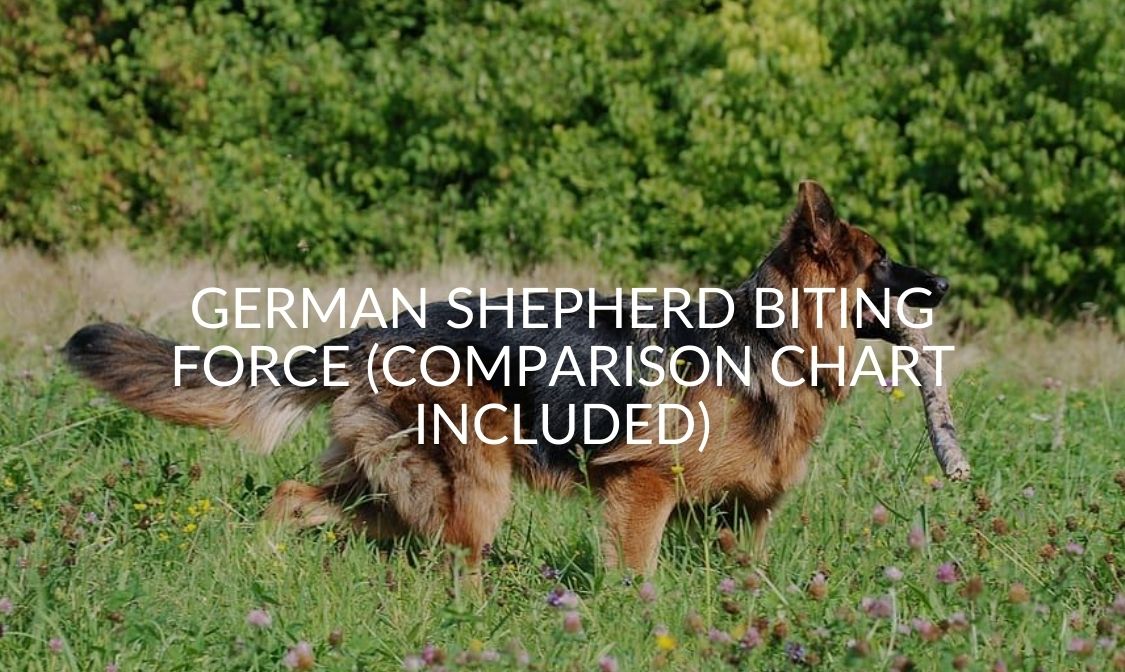 What Is Bite Force?

Before anything, it’s important for you to know exactly what bite force is! Obviously, bite force is a way of measuring just how hard something bites. And it’s measured in PSI (or pounds per square inch).

While we never know the exact bite force of animal, we can get a pretty good idea of where it should be roughly.

What Is A German Shepherds Biting Force?

A german shepherd’s biting force is roughly 238 psi. To put that into perspective a human’s is 162 psi and a gorilla’s is 1300 psi. It’s estimated that having a german shepherd bite you would exert the same amount of pressure per inch as a refrigerator.

How Damaging Is A German Shepherds Bite Force?

As you’ve probably seen in the news, a german shepherds bite force can be extremely damaging. In fact, german shepherds are able to bite so hard that it’s quite possible for them to break human bones.

When an untrained german shepherd has this amount of bite force it’s no wonder that they’re one of the dogs with the highest fatalities. (But this shouldn’t put you off. When they’re trained right they’re excellent family pets, great with children, cats, other dogs, and even make great guard dogs!)

It’s important to know the level of which a german shepherd can bite is split up into 6 different categories.

Knowing the different levels of biting force is going to give a clearer picture of how dangerous a particular german shepherd is. On the lower end of the spectrum your german shepherd will only require some basic levels of training, whereas as you go further down they may require a specialist, a muzzle, and in the worst cases euthanasia.

Here are the 6 different levels of biting force in german shepherds.

This is the bites dogs often display when they’re feeling threatened or they’re trying to scare you away. It isn’t going to land, but that doesn’t mean you shouldn’t worry. Once your german shepherd lets off a warning bite they’re very clearly showing you they’re not afraid to bite. And as situations escalate, it’s going to be much more likely they’ll bite again, and the bites are going to become more aggressive.

So if you’ve noticed your german shepherd has been giving warning bites, you should begin training them immediately.

As you can guess, this stage is where your german shepherd’s bite actually makes skin contact. However, the bite is still going to be incredibly superficial. While the bite has occurred, typically the skin won’t be broken. However, if your pup was a little bit too rough you may notice scrapes as well as tiny nicks and a small amount of bleeding.

If you notice punctures not scrapes then the bite is much more serious.

At this level, your german shepherds bite has fully penetrated the skin and the bite can be up to half their canine teeth deep. You’ll notice between 1-4 punctures on the skin, however, there should just be punctures and no lacerations.

If laceration have occurred it should be due to the victim pulling away or the dog being pulled away.

At level 3, you’re going to have to train your german shepherd and teach them bite inhibition. While level 3 is incredibly serious, fortunately a lot of german shepherds are able to overcome their instincts and become happy pets.

While a penetrative bite is serious the next level of a bit is much more serious. At least one of the puncture wounds should be over half the dogs tooth deep, and you’ll also notice lots of bruising and cuts.

At this point, your german shepherd will have held on after biting as well as possibly shaken their head from side to side to inflict more damage. Your dog will need immediate attention from a specialist at this point, and you should avoid bringing them into contact with anyone until this has happened.

It will often be recommended to keep yoru german shepherd inside away from everyone else, and if you do take them out, then they’ll need to be muzzled.

Level 5 goes from being a bite to being a full-on attack. Your german shepherd will be biting as much as possible and they’re probably looking to kill. At this point, no one is going to be safe around your dog, and they may not even be able to be treated.

Sadly, if a german shepherd is at this point it’s often recommended that they are euthanized. This is one of the reasons it’s so important to socialize your German shepherd as early as possible and throughout their lives, as well as making sure that you’ve trained them correctly.

(Is your german shepherd overweight? find out what to do!)

What Can Affect A German Shepherds Biting Force?

Here are the most common things that can affect your german shepherds biting force.

The Size Of Their Head

This is the same for all dogs. The bigger their head, the harder the biting force is going to be. If you’ve got a boy german shepherd then they’ll typically be able to bite harder than female.

Another big indicator of a german shepherds overall bite force is their body weight. Generally the more muscular they are, the heavier they’ll be and the harder they’ll be able to bite.

If your german shepherds biting force doesn’t seem as powerful as it should be, then there may be a problem with their mouths. It could either be caused by tooth pain, injury, jaw pain and in some cases even masticatory muscle deterioration.

What Should You Do If Your German Shepherd Bites?

When it’s not taken seriously often the behavior can become worse and worse and in some cases, they can even become fatal. If you speak to a professional then they’ll probably offer you the following advice.

If you wanted to know just how hard your german shepherd bites compared to other animals and even you. Then this handy comparison chart will give you a rough idea!

How Does A German Shepherds Bite Compare To Other Dogs?

You may think that German shepherds would have one of the strongest bites due to their power and size. But this simply isn’t the case. In fact, a german shepherds bite pales in comparison to a lot of other dogs.

(Have you ever wondered how hard german shepherds are to train?)

Now you know just how powerful a german shepherds biting force is, as well as how it compares to wild animals, other dogs, and even you!

If they do bite you should take them to a specialist straight away to get the proper training they need!

Lastly, if you liked this article make sure you check out the rest of the website. Otherwise have a great day!