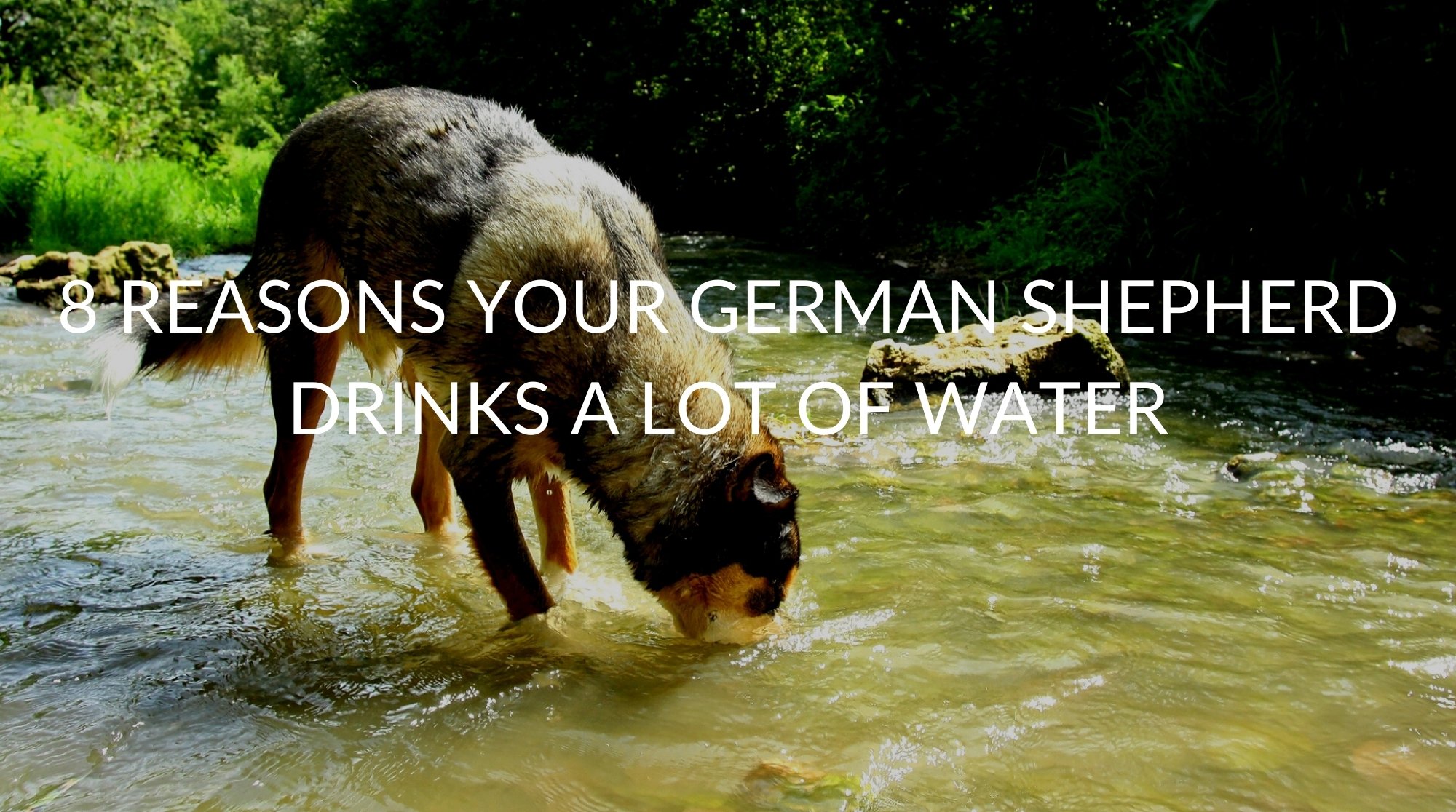 First Of All, How Much Should A German Shepherd Drink?

Your German Shepherd should be drinking about one ounce of water per pound of body weight. So that’s anywhere between 66-88 ounces of water for males and 49-71 ounces for females (on average).

This is according to Pet MD.

How Much Water Should A German Shepeherd Puppy Drink?

A german shepherd puppy should be given about one-half cup of water every couple of hours to make sure they’re staying hydrated. However, once they’ve been weaned, this can then increase to half an ounce to an ounce per lb of bodyweight.

Why Is Your German Shepherd Drinking So Much Water?

The first thing you want to be sure it’s not is a medical condition. Urinary tract infections and diseases like diabetes, polydipsia, and kidney infections can all cause your German Shepherd to end up drinking more. If you notice a sudden change in their drinking habits, then you should definitely take them to a vet to make sure it’s nothing serious.

If it’s too hot outside, then this could be another reason that your pup is drinking a lot more. Remember, German shepherds are wandering around with a huge thick coat on, so it will be a lot harder for them to stay cool. (If you think your German Shepherd is too hot, check out these great ways to cool them down!)

If you think they’re too hot, you may also notice them spending a lot more time in the shade or trying to get into the water to cool down.

If your dog is in otherwise good health and there’s nothing else wrong with them, then they may have psychological polydipsia. Fortunately, this is considered a behavioral problem rather than something more serious. And it most often happens in water-loving breeds.

Your pup could also be suffering from a stomach bug of some kind as well. If this is the case, you may notice them vomiting or suffering from diarrhea. They may be drinking more water to make up for all the fluids that they’re losing.

If you notice this happening, you may think it’s not a big deal, but you should definitely make a phone call to your vet to double-check it’s nothing serious. As diarrhea and vomiting can seriously dehydrate your pup very quickly.

They’re Eating Too Much Dry Food

If you’re feeding your german shepherd dry food, then, believe it or not, this can also make them thirstier. Just the fact that the food doesn’t have much water in it means that your German Shepherd will have to drink more to make up for it.

Also, if you’re feeding your german shepherd food from your plate, you should make sure it’s not high in salt as this can also dehydrate them.

The medication you may be giving your german Shepherd could be making them a lot thirstier as well. Anti-inflammatory drugs, heart failure drugs, and seizure medication are all some of the types that can dehydrate your pup.

If you have a senior german shepherd or a puppy, this could be another reason they’re drinking more as well. Puppies need more water as they’re growing. Likewise, senior dogs often end up drinking more as they begin to get conditions that affect their health and thirst. 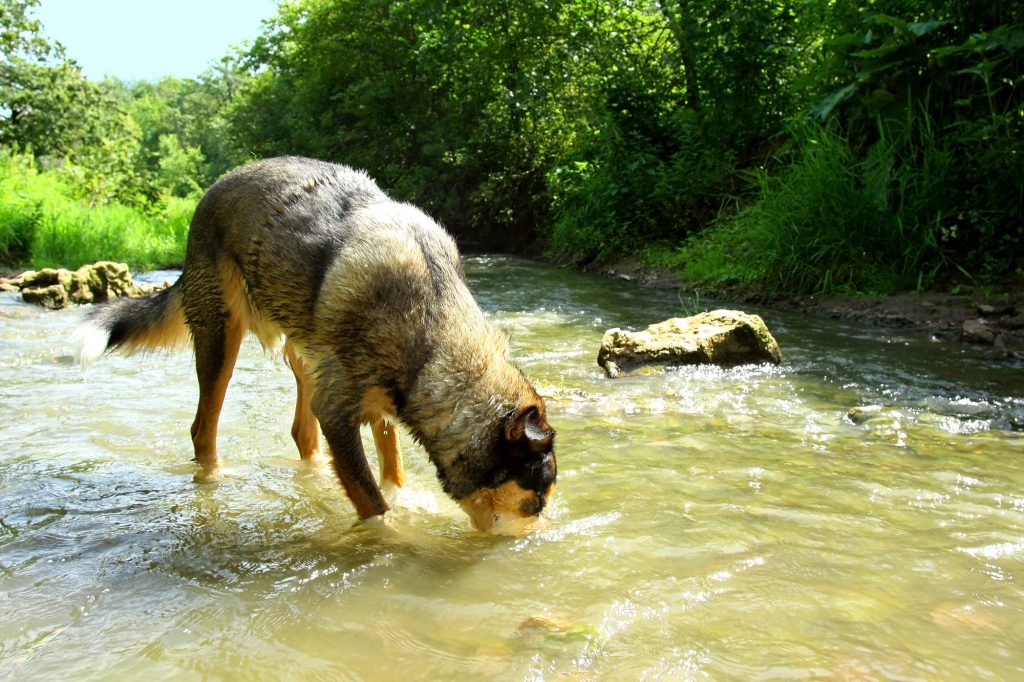 How To Help Spot Why They’re Getting Thirsty

If your German Shepherd has started drinking a lot more, then you may be beginning to panic. And while you should speak to your vet whenever there’s a change in your pup’s behavior, there are times when you’re definitely going to want to. Such as:

Their Sudden Thirst Has Come On Rapidly

If your German Shepherd doesn’t normally drink a lot, but all of a sudden can’t stop, then it could definitely be cause for concern, especially if you can’t think of a reason why they would be drinking more (such as heat).

Timing Of When They’re Thirstier

What Should You Do If Your German Shepherd Is Drinking A Lot?

If your pup is drinking a lot, then there are a few things you can do to make sure they’re as comfortable and happy as possible.

Take Them To A Vet

The first thing you’re going to want to do is to take your pup to a vet. This is just to make sure that there’s nothing seriously wrong with them and that you don’t need to worry.

Make Sure They Can Stay Cool

You also want to make sure that you’re giving your german shepherds lots of spots they can keep cool, especially in the summer months. As well as shaded areas, you can also provide them with a paddling pool which they’ll love. And if it’s possible, you can also keep them inside in an air-conditioned building.

Don’t Walk Them During The Hottest Part Of The Day

You also want to make sure you avoid walking them during the hottest part of the day. Not only can this dehydrate them causing them to drink more, but it’s not uncommon for german shepherds to get heatstroke and die during these times.

Here are the 5 signs of heatstroke you should be aware of in your dog:

You don’t have to make a complete switch, but even a 50/50 split between dry food and kibble can help keep your german Shepherd hydrated. You might also want to consider changing the dry food their currently eating, as another type might not be so dehydrating.

Make Sure You’re Not Giving Them High Sodium Foods

Again, you want to make sure you’re not giving your german shepherd foods that are high in sodium. This is most likely coming from treats you’re giving them, but you may want to also consider changing their dog food again if you notice it’s too high in salt.

There are also some things you want to avoid doing when your German Shepherd is drinking a lot more water as well.

First of all, you should make sure that you’re not ignoring your German Shepherd’s thirst. Monitor it to make sure it doesn’t get worse, and make sure you speak to your vet to let them know the situation.

Make Sure You Don’t Forget To Let Them Out

If your German Shepherd is drinking more, the chances are they’re going to need to go to the toilet increases as well. If this is the case, then you need to make sure you’re letting them out a lot more than normal.

Otherwise, it’s very likely that your German Shepherd will hold their urine in until they can’t anymore, which is going to be very uncomfortable for them.

Can Your German Shepherd Drink Too Much Water?

Though it’s unlikely, it is possible that your german Shepherd could end up drinking too much water. The condition known as water intoxication can often result in vomiting, nausea, bloating, and other gastrointestinal issues.

Fortunately, it’s more likely to occur if your dog has been playing in the water rather than just drinking normally.

As you can see, there are many reasons that your German Shepherd can be drinking too much water. Some of them may be a cause for concern, and some are nothing to worry about at all. This is why it’s so important to constantly keep an eye on your German Shepherd’s health and well-being.

If, for any reason, you think there’s something wrong with your german Shepherd due to their drinking habits, you should make sure to take them to a vet immediately.

And lastly, if you liked this article. Make sure you check out the rest of the website. Otherwise, have a great day!