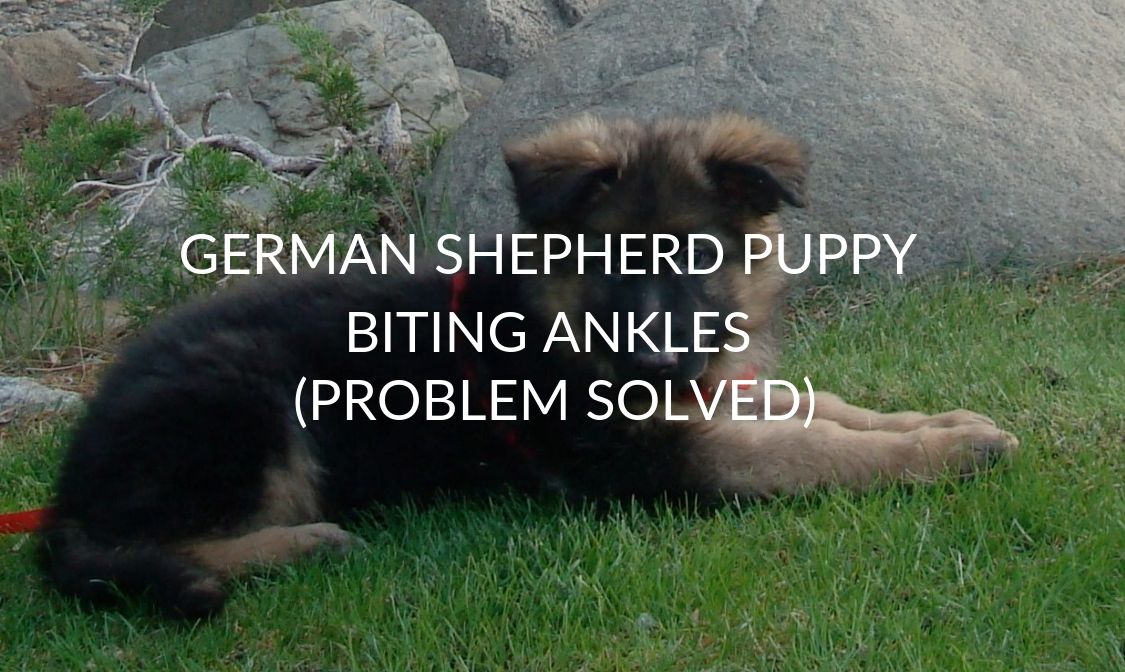 If you notice your german shepherd puppy biting ankles, then unfortunately there at the stage in their development where they’re biting everything.

It’s a fairly common problem a lot of puppies (not just german shepherds have). However, your German shepherds formative months are the months you really want to establish what they should and shouldn’t be doing.

So keep reading to find out why German shepherd puppies like to bite ankles, and what you can do to stop it!

Why Is Your German Shepherd Puppy Biting Ankles?

There are a number of different reasons that your german shepherd puppy is biting ankles. Fortunately, they are perfectly normal, and with the right training, you can get your puppy to stop!

It’s How Puppies Experience The World

Puppies experience the world through their mouths. They don’t have hands like you and me, so they have to figure things out using their mouths.

Although a lot of people use german shepherds as guard dogs for their home, it’s not actually their main behavior. As their name suggests German shepherds are herding dogs.

And because they wouldn’t be able to herd cattle through brute force, they have a better way of doing it. They bite at their ankles and nose to get them moving.

If your puppy is biting your ankles then he’s trying to herd you.

One of the reasons your german shepherd may be trying to herd you is because they don’t have any direction at the moment.

If you’re not training them or you’re letting them do what they want, then they’ll try and take control.

And of course, the only way they know to take control is to start herding. If you haven’t started training your pup yet and they are old enough, then this is the prime time to start.

If your pup isn’t just biting your ankles but biting everything, then he may be teething. All puppies go through a teething phase, and when it happens they want to bite everything.

They’re not doing it to be naughty, but to bring relief to their teeth coming through. If your puppies teething, then the most important thing you can do is be patient. And of course, make sure they have lots of toys they can use to relieve some of the pain.

(Find out more about german shepherd teething and the best toys you can use for teething.)

Lastly, rowdy behavior such as your a german shepherd puppy biting ankles could also be caused by not enough exercise.

If you’re not tiring your pup out, then it’s no wonder they’re going to begin acting up. They just have lots of excess energy that they need to expend.

How Do You Stop A German Shepherd Puppy Biting Your Ankles?

Luckily, if your pup is biting your ankles there are lots of things you can do to stop them. If one solution doesn’t work you can simply move onto the next.

But just remember, the best way to stop your puppy biting your ankles is proper training! While you may find lots of short term fixes, long term you should make sure your puppy is being trained properly!

So, what are some ways you can stop your german shepherd puppy biting ankles?

If you’re playing with your puppy and they begin to bite your ankles, then you should get up and walk off straight away. In a lot of cases, this shows them that it’s unacceptable to do when they’re playing.

They’ll soon realize that every time they bite your ankles that you stop playing and they often learn to stop doing it.

However, in some cases, not only will this not stop your puppy biting your ankles, but it will send them in a frenzy and they’ll bite your ankles even more. (This can also work great if your puppy is barking at you.)

If that’s the case, then the next step is too…

This time, instead of moving away from your puppy just stand completely still. This will tap into their need to herd, and soon they’ll realize that they can’t herd you by biting your ankles.

If possible, you should keep your puppy on a leash. That way when he starts to bite your ankles, you can stand perfectly still and begin gently pulling them away from you.

Remember when doing this, stand still and don’t do anything that would make them think that you’re playing with them.

It sounds counter-intuitive, but this can often be an extremely effective way of stopping your puppy from biting your ankles.

Let Out A Yelp

This is one of my favorite ways to teach a puppy not to bite, and it also teaches them how hard they should bite in the future.

Letting out a yelp, let’s them know that what they hurt you (even if the bite didn’t actually hurt). It teaches them bite inhibition which is a way to show how hard and soft they can bite things.

In fact, when doing this, a puppies bite inhibition becomes so good that instinctively, they’ll realize when dealing with people not to bite too hard.

When letting out a yelp, it’s also a good idea to pull your ankle away quickly, so they can see how much pain they’ve caused you.

Every time your pup pulls away and realize they’ve hurt you, make sure you congratulate them and tell them how good they’ve been. This will reinforce the positive behavior and they’ll quickly learn that biting you isn’t good.

While your pup biting your ankles can be annoying, this is the prime time to teach them what no means.

‘No’ is one of the staple commands that all dogs should learn, as it’s going to let them know when they need to stop doing something immediately.

To teach your german shepherd ‘no’ when they’re biting your ankles is relatively simple. Every time he does it, grab his collar and gently pull him away. However, while doing this firmly say ‘no’.

As well as teaching them ‘no’ this is often a good time to teach them ‘nicely’ or ‘gently’. No matter how old they get, there’s always a time your german shepherd may get over-excited.

One great example is during dinner time. While ‘no’ is too forceful and may stop them eating altogether, teaching them ‘gently’ or ‘nicely’, will let them know that they are allowed to do it. As long as they’re not being too rough.

Although it’s up to you whether you use both or not, you should always make sure your dog is taught ‘no’.

If you haven’t already, then this is going to be the perfect time to take your puppy to training! As long as they’re 16 weeks old and have all their immunizations, then they’re going to be ready!

Not only is this going to teach your pup everything they’ll need to know, but it’s also going to socialize them as well!

Make sure that you’re giving your german shepherd puppy plenty of exercise. If they’re not getting enough exercise then they’re going to become agitated, energetic and problematic.

As a rule of thumb, you should walk your puppy 5 minutes for every month he’s been alive. For example 3 months = a15 minute walk. And you can walk him the same amount of time twice a day too!

As well as lots of exercise, it’s also important to exercise his mind. Brain Training For Dogs is one of the best ways I know to do this!

Not only will your pup learn the core fundamentals that every dog should know, but you will also get to the root cause of any behavioral problem your dog has!

If your puppy is biting your ankles and you think it’s due to teething, then make sure that you’re providing him with lots of chew toys.

It’s much more likely that he’s teething if he’s biting your ankles when you’re not playing with him and just sat down.

Kongs, bones and hard chew toys are all great for a puppy that’s biting your ankles. If you think he’s teething you can also give him frozen carrots as well.

To teach them not to bite your ankles you should offer them the toy every time they try. This way they’ll learn that your ankles aren’t acceptable, however, chew toys are. (Check out some of the best chew toys for teething puppies.)

While there are lots of great things you can do to stop your german shepherd puppy biting ankles, there are also things you should definitely avoid doing.

If you’ve been doing these things then it’s best to stop immediately as they’re only going to inhibit your puppies development.

You Should Never Hit Your Dog

If you’re not in a life or death situation you should never hit your dog. When your puppy is doing something you’re not happy with they don’t know they’re doing anything wrong. After all, it’s just their natural behavior.

By hitting them you’re only going to fill them with negative emotions. These negative emotions will often come out in different ways and before you know it you have a dog with a whole range of issues that you need to deal with.

Don’t Shout At Your Puppy

Once again your puppy doesn’t know they’re doing anything wrong. By shouting at them you’re just punishing them for absolutely no reason.

And in a lot of cases, when you shout, your puppy’s going to think you’re just playing with them. They’ll start acting out even more because they think you’re joining in.

While sometimes shock collars have been known to help remove bad behavior from dogs, there are also lots of times they’ve only made situations worse.

If your puppy isn’t associating the shock with the bad behavior you’re trying to stop, then they may associate it with something else altogether. This will confuse them more and they’ll find it even harder to find out right from wrong.

Lastly, once again shock collars are only going to cause your puppy pain which will often result in negative emotions that will cause more issues in the long run.

When Should Your German Shepherd Stop Biting Ankles?

While development varies between puppies you should aim to have your puppy stop biting your ankles by around 5-6 months of age. However, remember some puppies are going to be early learners and others will be late bloomers.

At 5-6 months they should have full bite inhibition and realize that they’re not allowed to bite anyone hard.

The Best Way To Train Your Dog

While there are many different ways to train your dog, I’ve found one of the best ways is Brain Training For Dogs.

If your training your dog at puppy school, unfortunately, the problem is it’s not designed for individual dogs, but for getting groups of dogs to an acceptable level of obedience.

They’re just not designed for the individual.

(Read an in-depth review on Brain Training For Dogs.)

After all this information you should have a good idea of how to stop your puppy from biting your ankles. It’s an annoying habit, however, luckily it’s a common behavioral problem and one that can be fixed. Here are the main things to remember:

If you liked this article make sure you check out the rest of the website. If you have any more questions then you can leave them in the comments below!

Some other articles you might find helpful include what to do when your puppy is teething, chewing, crying at night, and crying in their crate.