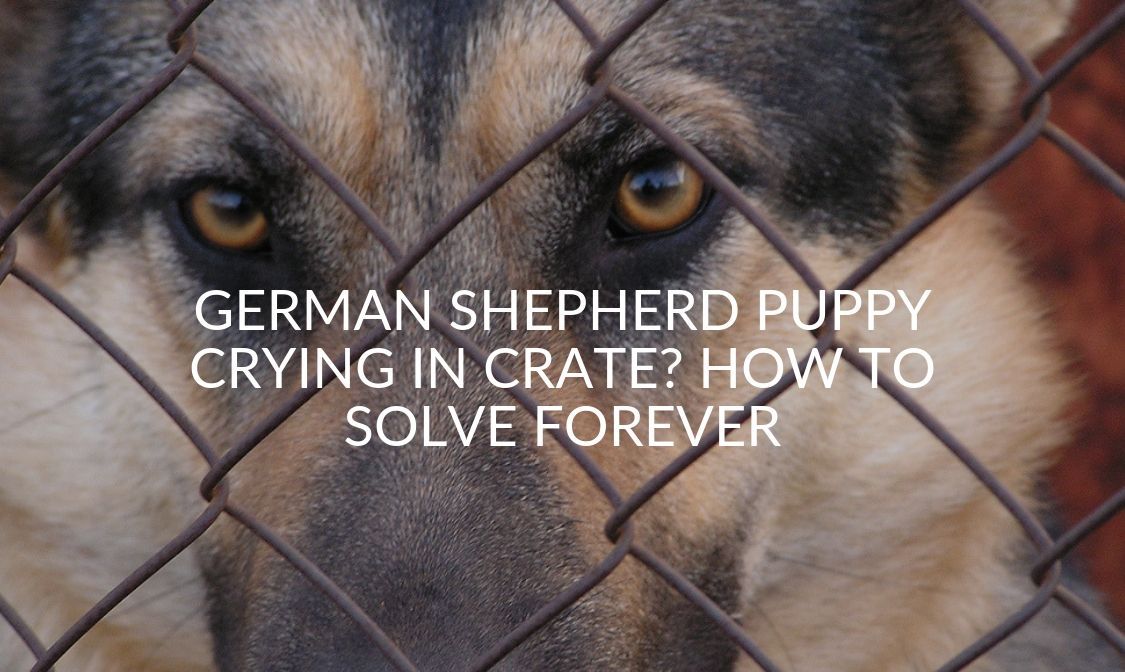 Your german shepherd puppy crying in their crate is a sound you’ll hate hearing. If you’re like me, you’re going to want to go down and make sure they’re okay. Or perhaps you’re tired of it and just want them to be quiet.

Either way, the best solution is getting them to stop crying altogether. Keep reading to find out why they cry in their crate, and more importantly, how to stop it.

Why Is Your Puppy Crying In Their Crate?

Puppies cry for all sorts of reasons. Your german shepherd could be crying in their crate for a number of different reasons as well. Before finding out how to stop them crying, it’s a good idea to figure out why they’re doing it.

This will help you to decide the best course of action to take. Just remember if your german shepherd puppy is crying in their crate, it’s very rarely something you need to worry about.

Here are the most common reasons your puppy may be crying in their crate.

They Need The Toilet

If you hear your puppy crying in their crate then it may be because they’re desperate to go to the toilet.

This is one of the reasons some people don’t crate train their puppy in the early days. They hate going to the toilet where they sleep, and if you keep them locked in their crate all night, this is exactly what’s going to happen.

Puppies and adult dogs cry all the time when they want attention. In fact, the chances of your puppy crying are even larger when you first get them.

They’ve gone from spending all of their night with their litter and mum, to spending their nights on their own. It’s no wonder they’re going to cry.

As well as this they may also be crying because they feel like they’re in danger. In the wild, crying is how they’re going to alert their parents that they need protecting.

Unlike humans who only sleep in one phase, dogs have about 3 phases of sleep per night. So you may think that keeping your puppy in their crate will teach them to sleep the whole way through the night.

But in actual fact, it teaches them to entertain themselves. The fact that they can’t sleep through the night is one of the reasons many people don’t keep their dogs in a crate all night, as it can affect their well being.

They Know It Gets Them Attention

If you’ve given your puppy attention when they’ve cried before, then they may be crying to get your attention again.

As you know you’re puppy isn’t stupid. And in a lot of cases, puppies learn that when they cry they get some form of attention from you.

This is probably the case if you go to them every time they cry or give them lots of attention when you shouldn’t be.

Your puppy is going to put on a lot of weight in a small amount of time. To be able to sustain all of this weight gain they need to eat a lot. Your puppy may wake up in the night starving. To try and get your attention they’ll cry and cry.

They Have Separation Anxiety

In some cases, your puppy may be crying due to separation anxiety. This is more likely to happen in puppies and dogs that have been rescued, however, any puppy can suffer from it.

How Do You Stop Your German Shepherd Puppy Crying?

If you’re reading this article then the chances are you’re looking for a way to stop your puppy crying in their crate. Fortunately, training your german shepherd puppy not to cry in their crate isn’t difficult, and there are lots of things you can do to stop it!

Turning The Crate Into A Positive Place For Them

The most effective way to stop your puppy from crying in their crate is to turn it into a happy place for them. Instead of seeing it as a punishment, your aim is to get them to see it as a place they can relax.

You want them to go in there of their own accord when they need to wind down and spend some time by themselves. If you think your german shepherd would benefit from this, then you need to do the following:

You should also try adding a couple of toys to the crate as well as their bed, so they automatically associate it as a place they’re comfortable with.

As they become more used to the crate, begin to close the door behind them and keep them in there for longer periods of time. Start with a couple of seconds, then a couple of minutes, until you climb to one hour and then two hours.

Make sure you’re taking your time with this phase, patience is key.

Just Let Them Cry It Out

When you first introduce your puppy to the crate it’s extremely common for them to cry and whine. If you’ve let them out and they’ve been to the toilet, then just let them cry.

After a time they’ll learn that crying isn’t going to get them anywhere and they’ll cease doing it. This may sound cruel, but you’re also teaching them that their crate is a safe space, and they don’t have anything to worry about when they’re in there.

What To Do If They Need To Go To The Toilet?

When your puppy cries, let them out and take them outside. However, don’t play with them, show them affection or anything of the sort. Once they’ve gone to the toilet give them a treat, however, if they don’t go the toilet and they’re only looking for attention, then don’t give them a treat.

They’ll soon realize that when they cry to be let out when they need the toilet they’ll be rewarded. However, if they cry for no reason that they won’t.

Make Sure Your Puppies Gets Lots Of Exercise

It’s also a good idea to exercise your puppy a lot before adding them to their crate. By exercising them you’re going to tire them out so much that in a lot of cases, they’re not going to bother crying.

This doesn’t just have to be through long walks and letting them off their leads. It can also be by playing tug of war with them and throwing their ball too. Whatever, you choose, just make sure it exhausts their body and their mind.

Should You Crate Train Your German Shepherd?

When done right crate training can be an effective way of creating an extremely happy atmosphere for your pup! However, if it’s not done right, then it can be very harsh on your puppy, and make them unhappy. Here are the pros and cons of crate training your puppy.

Benefits Of Crate Training Your Puppy

There’s a lot of misinformation when it comes to training your german shepherd. To make sure that you’re training them as best you can make sure you avoid doing the following if they’re crying in their crate.

Under no circumstances should you ever hit your puppy or any dog. It’s not an effective form of punishment, it’s cruel, and it’s going to cause more problems than it solves. Often times when you hit your dog they’ll begin to be filled with anxiety and fear and could end up lashing out.

(Check out these articles if your german shepherd is growling at you or a family member.)

Don’t Shout At Them

If your puppy is crying in their crate it’s a good idea not to shout at them or you may make matters worse. If you shout at them, then they may think you’re joining in and begin crying more.

As well as this, even by giving them the attention of shouting at them, they’re still getting what they want.

Lastly, once again, it can also scare them. And if you constantly scare your dog, they’re going to hold onto that and become filled with fear and anxiety.

Don’t Leave Them In Their Too Long

As previously mentioned, leaving your puppy in their crate for too long is cruel. They’ll need to go to the bathroom after a while, and they’ll also become extremely bored over time.

If you are going to keep them in their crate only keep it to about 3 or 4 hours at a time when possible, and as their behavior starts to become a lot better, you won’t need to lock them in it anymore.

Don’t Overdo It In The Beginning

It’s very important in the beginning that you don’t overdo the amount of time that you leave your puppy in their crate. If you lock them in there for an hour straight away, they’re not going to be used to it and they’ll feel like they’re being punished for no reason.

So make sure you’re starting small and working your way up.

What’s The Best Way To Train Your German Shepherd Puppy?

Crate training is often used to train your puppy to be good. However, it’s not the most effective method and it only stops them from being naughty, instead of training their mind not to be naughty.

A better method to crate training is puppy training. If you haven’t looked at puppy training already, then now is a great time to start. The training I’d recommend for all puppies and dogs is Brain Training For Dogs.

It’s going to be perfect for you if you’re not quite sure how to train your dog properly, or they have one sticking point you just can’t seem to get over!

What you’re going to love most about it is the fact it’s based on positive reinforcement. Instead of punishing your dog for doing something wrong (which you obviously HATE to do), you get to reward them for the things they do right!

This method of training has proven to be more effective than other negative styles of training!

So find out more about Brain Training For Dogs!

(Read an in-depth review of Brain Training For Dogs.)

Training your German shepherd puppy to stop crying in their crate doesn’t have to be hard. In fact, if you follow the steps on this page then you’re going to have a dog that will end up loving their crate, instead of crying in it!

Here are some of the main points to remember from the article.

If you liked this article or have any more questions make sure you leave them in the comments below. Otherwise, have a great day!

And if you notice that your german shepherd is crying at night, even when they’re not in their crate, here’s what you should do!