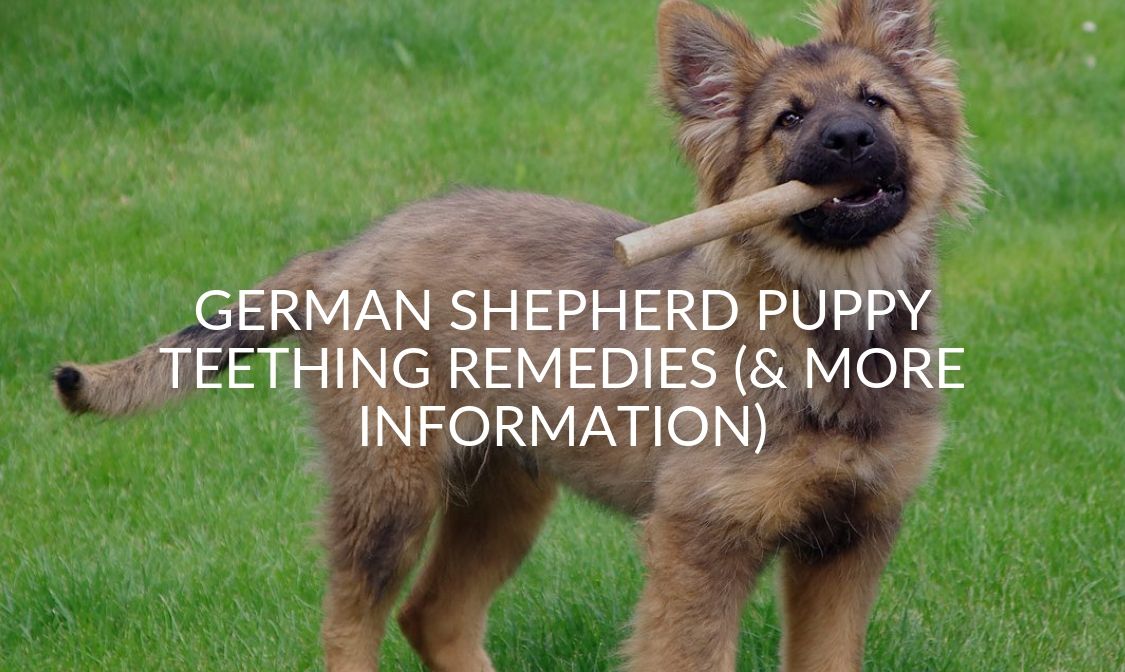 The teething phase in german shepherds can be an extremely uncomfortable experience for your pup. However, you can make it a lot better. Keep reading to find out common german shepherd puppy teething remedies you can use, as well as a lot more useful information.

Your german shepherd is going to have a range of symptoms when they’re teething. While they may not have all of them, more than one is an indicator. Here are some of the most common things to look out for:

If you take a look inside your pup’s mouth then you may notice that their gums are red, swollen and inflamed. This is a clear sign they’re in physical discomfort and it will begin to occur when the teeth are coming through.

The gums may even look like their bulging out right before the teeth are about to come through.

As well as gums that are swollen, you may also notice that their gums are bleeding. However, the bleeding shouldn’t be a lot. If it is then you should take them to the vets. You may not notice the bleeding when you look at their gums, however, you can often spot small amounts of blood on things they’ve chewed.

If you’re feeding your puppy dry food then they may have trouble eating it. The kibble may be too hard for them to eat and cause them pain and discomfort.

This one’s kind of obvious. But your puppy may seem more irritable than usual when they’re going through their teething phase. Of course, they’re in pain so they’re not going to want to have fun as much as usual. However, make sure they aren’t exhibiting signs of aggression.

Any puppy that is teething will begin chewing on pretty much everything. Nothing is safe from a puppy when they’re teething so during this phase make sure you remove anything valuable from their grasp.

Remember, if they do chew on something important to you it’s not their fault. They’re just trying to get relief from the pain.

While it’s not as common as some of the other symptoms on this list. Sometimes a german shepherd will drool when they’re teething. However, while a little drooling is alright, if you notice excessive drooling you’ll need to take them to the vets.

(If your puppy is drooling, but you don’t think it’s due to teething, here are some other reasons drooling can occur.)

The reason your german shepherd is teething is because their new teeth are coming through. You’ll often notice they’ll be missing teeth when they start getting their adult teeth. This happens when their milk teeth fall out before the new ones have come through.

Don’t be surprised if your german shepherd gets a mild fever either. While this isn’t common, it isn’t a cause to be alarmed by either. If they do have a mild fever it shouldn’t last more than a week. If it does, then take them to the vets.

What Are The Best German Shepherd Teething Remedies?

Fortunately, there are plenty of german shepherd teething remedies at your disposal. You can use as many as you want as they’re only going to help reduce your puppy’s pain and discomfort.

Here are some of the most common remedies you can use as well as a few you may not have heard of before.

The most obvious way to help your puppy when they’re teething is by giving them chew toys.

When choosing chew toys look for ones that are made from hard rubber such as Nylabones and kongs.

Just make sure you aren’t giving them too many toys at once. They may begin having trouble differentiating between things they can chew on and things they can’t chew on.

(Here’s what to do if your german shepherd puppy is chewing on everything.)

Another great method for helping to soothe your german shepherd’s pain is to dip a dishcloth in water, freeze it and then let them chew on it.

This will have two benefits, first of all, it will be hard enough for them to chew on and get relief. Secondly, the cold is going to help soothe their gums and numb their mouth.

If you do plan on using other fruit, make sure you check to see if they’re safe first. Also, make sure that you’re not overfeeding them either.

You don’t just have to stick to chew toys to help soothe your puppy. You can also give them cooled chamomile tea. Chamomile tea provides mild pain relief as well as inducing sleepiness. So not only will your german shepherd not be in as much pain, but they’ll also be able to sleep!

Avoid Anything That’s Too Hard

When you’re giving your puppy things to chew on you should avoid anything that’s too hard. If they chew on something which is too hard, then they may end up splitting their baby teeth.

If this happens, it’s not uncommon for the teeth to get stuck in place, with the adult tooth being forced to grow around it.

As well as this there’s also going to be an increased risk of an abscess forming in their mouth as well.

This means that you should definitely avoid bones, and be careful when letting them eat ice cubes as well.

(Find out why your german shepherd puppy is barking.)

Your german shepherd doesn’t have enough experience to know what they can and can’t chew on. While something is valuable to you, to them, it’s just something they want to bite.

If your german shepherd is chewing on something they shouldn’t be, then here are some great solutions to get them to stop!

This is the most common method that people use to stop their puppy chewing on something they shouldn’t be.

Every time you notice your german shepherd beginning to chew on something, remove it from their mouth and firmly tell them ‘no’. Once you’ve done this have another item ready that they can chew on and give it to them

They’ll soon learn that the item they are chewing on is forbidden and to stick to the new item.

Use A Taste Deterrent

Another great idea is to use a taste deterrent. This is perfect when your pup is chewing on things they shouldn’t be and you’re not around.

While taste deterrents aren’t harmful to your dog, they don’t taste nice. One bite and your german shepherd will be repelled instantly.

If you don’t know what taste deterrent to buy, Grannicks Bitter Apple Spray is extremely popular and effective.

Just remember, before using any deterrent, test a small amount on the item you plan on spraying to make sure they don’t get stained.

As well as knowing teething remedies and what to avoid doing, here’s some more useful information and commonly asked questions about teething in german shepherd puppies.

When Does Teething Usually Start?

Your puppy should begin teething when they’re about 6 weeks old. At this stage, their baby teeth are starting to fall out to make way for their adult teeth.

When Does Teething Usually End?

Depending on your dog, teething can end when they’re between 4-6 months old. However, in most cases, the six-month mark is the most common time. If by six months they haven’t stopped teething then you should take them to their vet.

How Long Does Teething Last?

Teething is a painful and irritating time for your puppy. The reason they’re chewing is that they’re looking for relief from the pain in their mouth.

Do You Need To Brush Your Puppies Baby Teeth?

Although your puppy’s baby teeth are going to fall out relatively quickly, it’s still important that they’re brushed and taken care of.

The biggest reason you’re going to want to brush your dog’s teeth is to help keep their gums healthy. If they aren’t brushed regularly the gums can often become infected and damaged.

Another reason is that it’s going to help get them in the habit of having their teeth brushed. If you don’t brush their teeth when they’re a puppy but start when they’re an adult, they may end up resisting a lot more.

How Else Can You Relieve Teething Pain For Your Puppy?

As well as everything mentioned above there are also a few more tricks you can try to relieve your puppies teething pains as well as keeping them safe.

There are lots of different german shepherd puppy teething remedies at your disposal. And you don’t have to use just one. And fortunately, Teething is a temporary problem that will seem like a distant memory soon.

Here are the main points you should remember from this article.