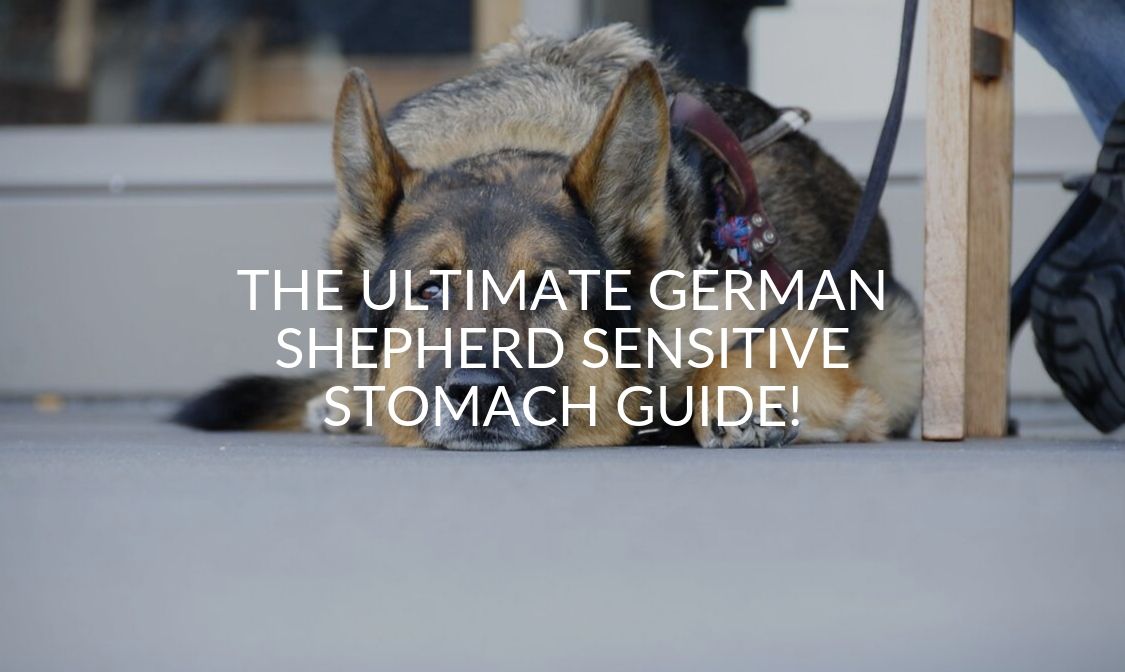 There are a whole host of reasons that can cause your german shepherd to have a sensitive stomach. And if your dog is suffering then you need to find out what they are, how to treat them, and what the common symptoms are.

So keep reading to find out all of this and more!

What Causes A Sensitive Stomach In German Shepherds?

There is a whole range of different causes that could be behind your german shepherd’s sensitive stomach. If you can figure out the cause, then you can normally figure out the solution as well.

So what are the most common causes?

When this happens if the food is contaminated with parasites it may end up temporarily giving your german shepherd a sensitive stomach.

The only way you’re going to be able to test for parasites is by checking their stool. However, remember sometimes even stool samples can’t show them.

If you’re living in a country that always has warm weather, then there’s an increased chance that your dog might have a sensitive stomach.

This is mainly because food spoils a lot quicker in warm weather. So if your dog is always eating food that’s starting to spoil then there’s the increased risk that they’re going to be sick a lot more.

And in a lot of cases of a sensitive stomach due to food, too many grains can be the biggest problem.

They’re Born With A Sensitive Stomach

Sometimes your german shepherd is just going to have a sensitive stomach. If they’re born with it, you’ll have to adapt your care accordingly.

Sensitive stomachs can often be uncomfortable for any dog, so make sure you’re giving them what they need.

What Are The Symptoms Of A Sensitive Stomach

Spotting the symptoms of a sensitive stomach is the best chance you’ve got of sorting the problem.

Of course, you’re always going to need to take them to the vet when you suspect they have a sensitive stomach, but being able to spot the symptoms will alert you to food which can make the problem worse.

Here are the most common symptoms of a sensitive stomach in german shepherds.

Hypersalivation is when your german shepherd is producing a lot more saliva then they should.

It normally occurs in german shepherds with sensitive stomachs and it can often be a precursor for vomiting.

If your german shepherd is hyper salivating you’ll notice drool running off the sides of their mouths.

As well as hypersalivation your german shepherd may also vomit. Vomit is most likely to occur after they’ve eaten something, however, it could happen at any point.

However, remember, vomiting could just mean that your german shepherd has a stomach virus or bug and nothing more.

If your german shepherd is vomiting for an extended period of time then it’s a good idea to take them to the vets.

If your german shepherd constantly has bad flatulence then they may have a sensitive stomach. When their body doesn’t agree with something they’ve eaten, gas will normally be created.

When excessive gas occurs after a diet change, it is most likely the new meal in their diet that’s causing it to occur.

One great way you can get rid of excessive gas is to give your german shepherd charcoal biscuits.

Along with gas, diarrhea is one of the most common signs of a sensitive stomach in your german shepherd.

Although, it can also be a sign that your dog has eaten something they shouldn’t have, or that they’ve got a stomach bug.

If you notice that your german shepherd constantly has diarrhea or that their stool is soft, then you should check to make sure they don’t have a sensitive stomach.

Blood in their stool can be scary, however, it’s not always something to worry about. In fact, it can be an indicator that your german shepherd has a sensitive stomach.

If you notice blood in your dogs stool more than once, make sure that you take them to a vet to make sure everything is okay.

Not Moving As Much After Eating

It’s quite normal for your german shepherd not to want to move as much after eating. But if they really seem less mobile and not able to move at all, then it could be a sensitive stomach.

Have you ever been really bloated and not wanted to move? That’s what happens to a german shepherd with a sensitive stomach every time they eat!

How To Soothe A German Shepherd’s Sensitive Stomach

Fortunately, there are plenty of ways you can soothe a german shepherd’s sensitive stomach. Just remember, that if you think there’s something wrong, the most important thing you can do is take them to the vets.

Here are some of the main ways to help soothe their stomach:

If you’re buying your german shepherd kibble then it can often upset their stomach. Commercial dog food like kibble often has fillers in it that don’t agree with the stomach of some dogs.

Because of this a lot of people choose to move away from kibble and start giving their german shepherd natural food in its purest form.

This includes fresh meat, organs, and muscles. Eating this sort of food is the most natural way for your german shepherd to get food into their stomach so it’s less likely to irritate their stomach.

You’ll also need to make sure that your german shepherd is getting some vegetables and fruit in their diet as well. Contrary to popular belief, they’re not carnivores but omnivores. Which means they’ll need some variety in their diet.

Some great fruit to give them are strawberries, bananas, and apples!

Sometimes it’s not your german shepherd’s stomach that’s the problem. If the food you’re buying is cheap, then it probably contains poor ingredients.

If you’re going to keep feeding your german shepherd commercial food then it may be worth purchasing a more premium brand.

Just remember, even if the food is more expensive, it doesn’t mean it’s better. Check the ingredients to make sure there aren’t any fillers before purchasing.

Oftentimes food that contains a lot of grain can agitate a sensitive stomach.

If you think that grain is causing your german shepherd’s sensitive stomach then it’s best to swap to grain-free food.

It may seem quite difficult to do this, but fortunately, there are plenty of great brands to choose from!

Top Their Food Up With Easy To Digest Food

Another choice is to top their food up with easy to digest food. This way, they’re still going to get the nutrients they need, but it’s going to pass through a lot easier!

Some great choices of food to choose from are things like rice, chicken, pumpkin, sweet potato and green beans.

As well as this you can also try adding some probiotics to their food to help the bacteria in their gut flourish.

Remember, when altering your dog’s diet, you should check with your vet to make sure the food you’re giving them is going to be okay.

If your german shepherd has an extremely sensitive stomach then medication is an option. To get medication you’ll need to speak to your vet who can go over your options.

However, remember, this is often a last resort. Normally diet change on its own is good enough to soothe a german shepherd’s sensitive stomach.

Don’t Let Them Eat Too Quick

If your dog is anything like mine, they can wolf their food down in seconds. You turn your head for one second and when you look back it’s gone.

Not only is this going to leave your dog unsatisfied, but it can also upset their stomach. When they eat that quickly, they’re also gulping down lots of air too.

This excess air can irritate their stomach.

You can slow down their meals by splitting it up, or even better, buying a bowl designed to slow down how quickly they can eat.

It can be hard, but as best you can try to watch what your german shepherd is eating. When you’re taking them on a walk try not to let them get any scraps.

It’s almost impossible to do when they’re off the leash. However, if they’re on the leash scan the road ahead to make sure no food is lying around.

If there is food lying around then make sure they’re not going to gulp it down when they walk past.

Also, make sure you’re not feeding them scraps of your food or letting your guests do the same.

Don’t Change Their Diet Too Quickly

Lastly, make sure you aren’t changing their diet too quickly. Instead of going from one type of food to another, you should slowly transition between the two.

If you swap too quickly then you’re definitely going to upset your german shepherd’s stomach a lot more, which they definitely don’t need.

As you can see many things could be causing your german shepherd’s sensitive stomach. Fortunately, there are also many solutions that you can use to fix it! Here’s a quick recap of all the most important things to remember:

If you liked this article or you have any more questions make sure you leave a comment below. Otherwise, have a great day!