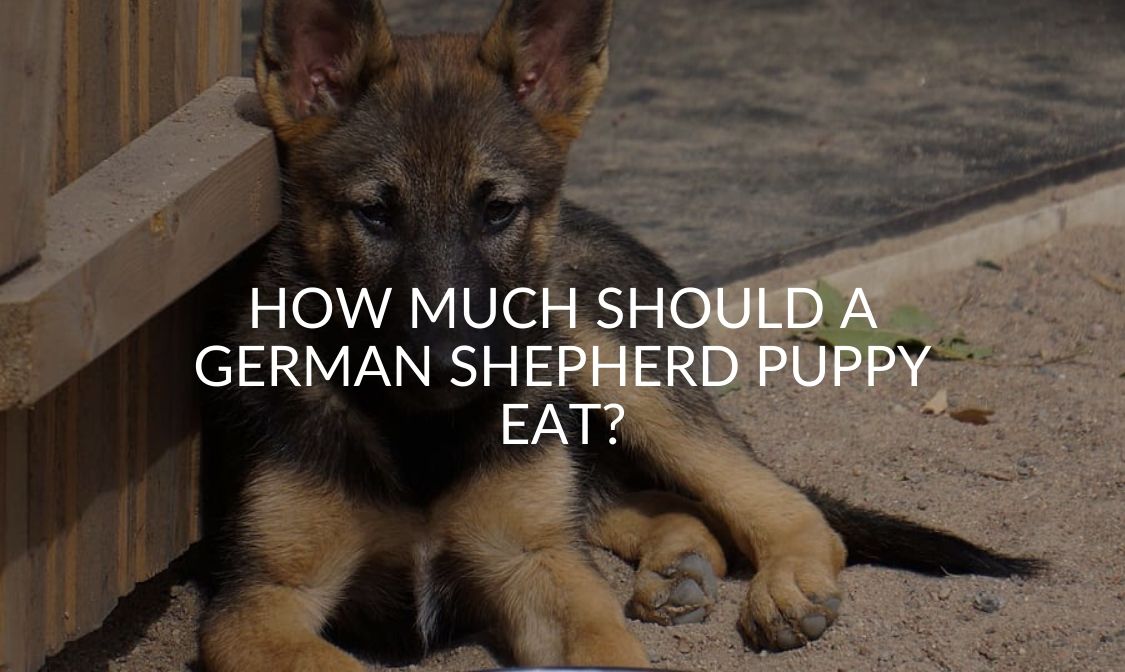 In this article, we take a look at how much food you should feed your German Shepherd puppy. We will also consider signs to look out for that may signal they’re being overfed, as well as signs you’re not feeding your puppy enough.

How Much Should A German Shepherd Puppy Eat?

Determining what to feed your German Shepherd puppy only covers half the challenge when implementing a feeding plan. You already know that your puppy’s food should be high in protein and fat. It should be formulated specifically for larger dog breeds and should have a complete nutritional profile that is balanced with the right vitamins and minerals.

There are a few things to take into account when figuring out how much a german shepherd puppy should eat. These include:

Feeding guidelines tend to differ based on these factors. Take special care when deciding on the type of food. A German Shepherd puppy’s immune system is still developing, and they might have a sensitive stomach.

Dry kibble is a good option to start with. The feeding guidelines for dry kibble depends on your puppy’s age and weight. The following are general guidelines that you should consider if you are unsure how much a German Shepherd puppy should eat.

These are general guidelines recommended, particularly for German Shepherd puppies. It is important to note that you also need to take your own dog into account.

If they are very active and it seems like the amount of food you give them is not enough, then you could increase it a little bit. If your dog does not eat all of their food, they’re becoming overweight, or you constantly find yourself throwing some out, then consider reducing the amount you give them during each meal.

How Often Should You Feed A German Shepherd Puppy?

How much should a German Shepherd puppy eat is most likely not the only question you are asking. There is often a general confusion in terms of the frequency at which these puppies should be fed.

With the frequency of feeding, there are also a couple of things that you should be taking into consideration. First of all, considering the age of your German Shepherd puppy. The puppy is not likely to be able to consume a large amount of food at a young age.

For this reason, the daily recommended food should be divided into multiple meals. As the puppy ages and grows closer to being an adult, the food provided during a single meal can be increased.

When you first receive your German Shepherd puppy, it is generally advised to feed them about four times each day. The amount of food they eat during the entire day should thus be divided into four different meals. Feeding four times per day should be continued until the puppy reaches the age of about eight weeks.

At the eight-week interval, the puppy should be able to tolerate more food during a single meal. At this time, you should reduce the number of feedings offered to your puppy each day. Reduce the feeding frequency from four times a day to three times daily once your German Shepherd puppy is eight weeks old.

If you do decide to increase the feeding frequency after the age of 12 weeks, be sure to consider the amount of food you give your puppy at every meal. This should be adjusted accordingly to avoid feeding them too much.

How To Know If You’re Feeding Them Too Much?

There is a common concern among German Shepherd dog breeds. The concern is related to the occurrence of developmental orthopedic disease. The disease is also often simply referred to as DOD. The condition is considered rather serious, as it holds longer-term complications for the dog.

DOD primarily occurs when a German Shepherd eats too much when they are still very young. The excess food causes them to gain too much weight, too fast. The condition places stress on the skeletal system, as well as the bones of the dog. This can cause problems with the German Shepherd’s development.

(It may also be one of the contributing factors that cause elbow dysplasia to occur in german shepherds.)

The best way to avoid overfeeding your German Shepherd puppy is to ensure you comply with the general guidelines when you feed them. Only feed them more than what is recommended if it is completely necessary. Most people, however, find that falling within these guidelines is appropriate and helps to keep the dog’s satiety level high.

How To Know If You’re Not Feeding Them Enough?

Underfeeding is also a common concern. You might try to avoid overfeeding, but end up not giving your German Shephard puppy enough food.

Looking out for signs of underfeeding is important. German Shepherds do have a lot of hair in general, which can make it more difficult to see the physical signs. If you do see that your puppy is not looking healthy and too skinny, then you are most likely not feeding them enough.

Be sure to slowly adjust the diet if you find that your German Shepherd puppy looks too skinny. You do not want to suddenly introduce a lot of extra food into their daily diet. Rather increase the food slowly. Look at how the puppy responds to the increase in food. This will help you reach an appropriate amount of food without overfeeding your German Shepherd puppy in the process.

Understanding how much should a German Shepherd puppy eat is crucial if you are planning to adopt one of these dogs.

There are certain factors that need to be considered in the equation when deciding how much to feed your German Shepherd puppy. Be sure to look out for signs that you are feeding your dog too much as well since this can cause long-term problems with a German Shepherd, even when they reach adult size. And lastly, at the same time, avoid underfeeding your puppy too.