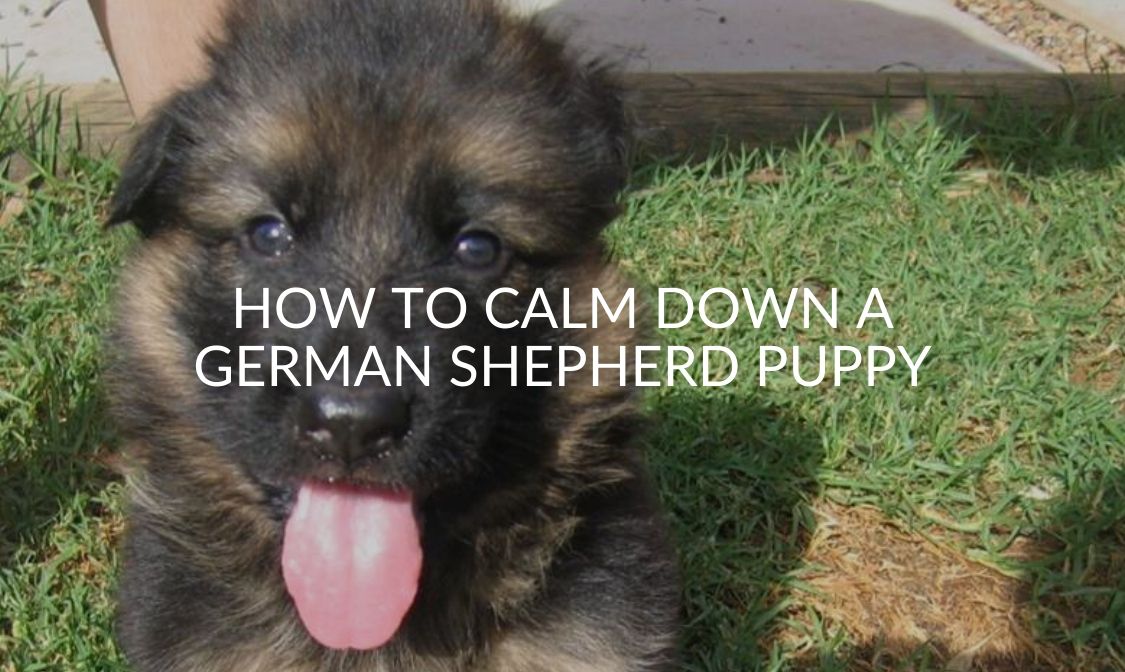 Your german shepherd is likely to become energetic at 3 months old. This is when they’re going to want to explore the world. Unfortunately, they’re also likely to stay energetic until they’re about 3 years old.

However, you can help calm your german shepherd down by using an effective training program. And while at three years old they’re still going to be energetic, you should notice that they’re energy levels taper off a little bit.

(Find out more about a german shepherds growth stages.)

Why Are German Shepherd Puppies So Energetic?

To really figure out why german shepherd puppies are so energetic it helps to understand how they’ve been bred!

German shepherds have been bred to be herders. Just think about how much energy it would take your pup to herd a whole group of animals effectively. They’d need tons of energy otherwise they’d pass out!

So it’s no wonder they’re constantly running around. They’re full of energy, but in a lot of cases spend most of their day not doing much.

And if they don’t have anything to herd, then they’ll probably end up trying to herd you. In fact, this is one of the reasons it’s so common for a german shepherd puppy to bite your ankles!

They’re trying to get you where they want you to go. And they’re doing this because they’re bored and full of energy.

As well as being natural herders, they’re also guard dogs as well. Being a guard dog is a natural part of being a herder. They need to make sure the herd is staying safe, not running off or being attacked.

However, without a herd, you and your family are very likely to become the thing they feel the need to protect. This is also part of the reason they may bark at strangers that try to approach you!

And, of course, to guard effectively they’re going to need to stay alert all the time!

Just look at the way your german shepherd puppy is naturally built. They’re strong and athletic dogs. They have an innate amount of lean muscle on them and low fat. They’re made for exercise.

When you have a german shepherd you need to make sure they’re getting enough stimulation every day. Both mentally and physically!

If they’re not getting this then they’re going to act out and never seem to calm down. Fortunately, as you’re about to find out, there are many ways you can help keep your german shepherd puppy calm!

(Find out how to stop a german shepherd puppy from biting and nipping!)

How To Calm Down A German Shepherd Puppy

Afterall there’s going to be a point in time where they won’t have the energy to be hyper anymore. Like my old dog who lived to 16 years old!

Anyway, here are the best ways to calm down a german shepherd puppy!

If you haven’t trained your german shepherd properly, then this is the perfect time to start. Whatever bad behavior your shepherd has, whether they just won’t calm down, they’re barking, or even growling and biting, using the right training program is the key to having an obedient and happy pup.

Just imagine how great it will feel to finally have a calm, peaceful german shepherd, not one constantly dashing around and destroying things! Instead, you’ll have the peace of mind that you have a well-behaved pup, and the boundaries you set for them, will always be there, EVEN IF YOU’RE NOT.

Of course, as they get older you can then give them more and more. And if you feel like your puppy is still active after exercise, try playing with them!

Tug of war is a great way of expending a lot of their energy, while not wearing on their little bodies too much!

Play With Them More

On the subject of tug of war, play with your puppy as much as you want! They’ll soon want to leave you alone when they’re feeling tired.

Playing can often be better for walking as they can leave when they get tired. If you walk them too much then they’re still going to have to walk home.

If you’re not sure what things to do you can try throwing a ball for them as well as tug of war.

However, I wouldn’t recommend chasing them around. If you do it too much they’re not going to settle because they’ll be too excited.

You should also make sure you’re socializing your puppy regularly! This will tire them out physically and mentally! They’ll be learning how to interact with other dogs, and they’ll also be getting lots of exercise in as well.

If you don’t socialize your pup properly when they’re young you’re also a lot more likely to have problems when they grow up. Such as barking at other dogs.

If your german shepherd is being hectic, obviously, you’re never going to reward them. However, you should reward them for calm behavior.

Next time they’re running around and full of energy, ignore them. Or get them to calm down. Once they’ve calmed down leave them for a little bit.

Finally, when they’ve been calm for 2-3 minutes give them lots of love, affection, and treats. This way they’ll learn when they’re calm they’ll get rewarded, and when they’re hyper they won’t.

It’s also important not to discipline, shout, or tell off your puppy when they’re being naughty. When you do that you’re going to give them the attention they want. Some puppies would rather have negative attention than no attention.

This one is a lot more holistic, however, some people swear by it. You could try making your house smell more like lavender which is often used for it’s calming properties.

However, remember, while it’s fine for your puppy to smell lavender, it’s best not to let them get close enough to eat it.

(Find out how to discipline a German Shepherd the right way!)

You should also make sure your puppy has a routine to follow! Routines are used for children, so why wouldn’t you use them for a puppy?

When you follow the same routine with them every day, they’ll learn when it’s okay to be excited and manic, and also when they need to be calm.

A good routine I follow is giving them breakfast in the morning, and then taking them for a walk. If you have to go to work, leave them alone, and then spend time with them in the evening. Play with them for a little bit and give them dinner.

Finally, after dinner, I keep my dog calm for the rest of the evening. This way she knows that bedtime is approaching and it’s not the time to be excited anymore.

Give Them Toys That Stimulate Their Mind

Giving your german shepherd toys that stimulate their mind is a great way of helping to keep them calm.

I rave about them a lot on this website, but if you haven’t bought your german shepherd a KONG, then you definitely should!

When you have a KONG you can fill it with treats your puppy will have to work to get out. This will stimulate their minds while also keeping them interested.

Why don’t you take some time out of your day to teach your puppy tricks! It’s another great way to keep their minds stimulated, and it can also be beneficial later on. Start with the basics like ‘sit’ ‘no’ and ‘paw’.

Once you’ve mastered those you can move onto things that are more difficult like roll over and play dead!

(Brain Training For Dogs is also a great way to teach your puppy lots of new tricks!)

Be Careful What Food You’re Giving Them

When you’re feeding your puppy treats and food, make sure it’s nothing that will make them too hyper.

The most obvious things to watch out for are foods high in sugar like fruit. However, it may be worth checking the ingredients on their dog food. If you’re not buying high-quality food, it could be making them more energetic.

Make Sure You’re Calm Around Them

Lastly, make sure you’re calm around your puppy. They’re going to pick up on your energy, so if you’re excited and running around, they’re going to copy you.

If you don’t believe me try it out for yourself. Next time your puppy is sitting calmly, start speaking to them in a high voice and getting excited.

(Find out what to do if your german shepherd puppy is acting aggressively.)

Now you should know how to keep a german shepherd puppy calm! If you follow the advice given on this page and use a good training program you’ll have a calm puppy in no time.

Here are a few of the main things you need to remember.

If you liked this article make sure you leave a comment in the section below. Otherwise, have a great day.