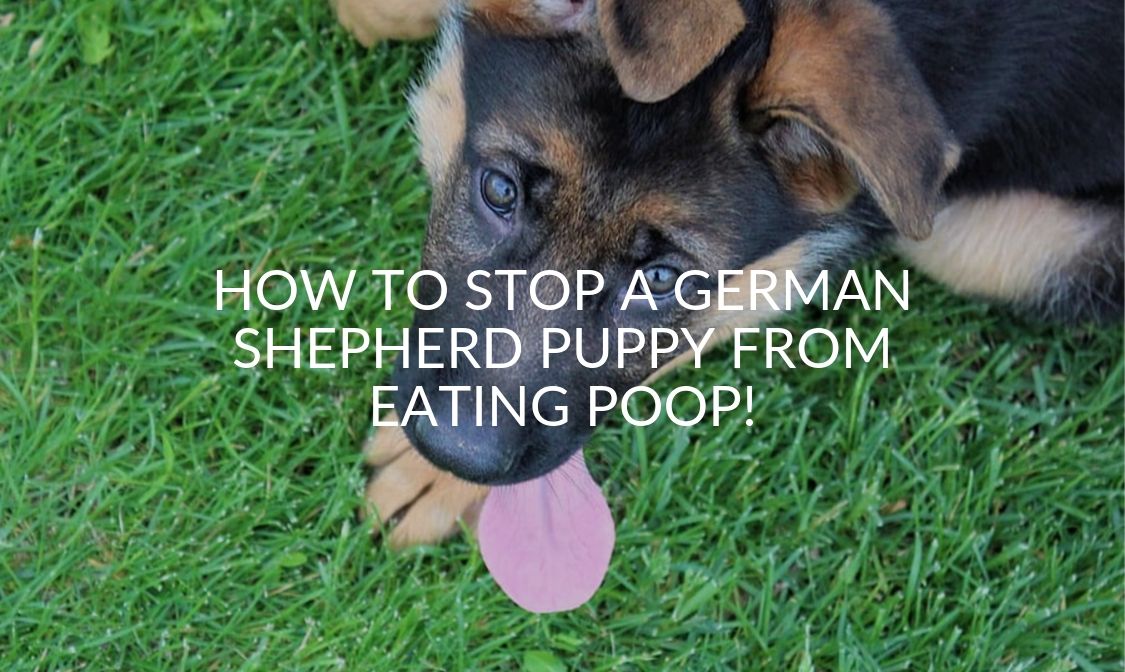 There’s not a lot that’s grosser than watching your dog eat poop. So in this article, you’re going to find out how to stop your german shepherd puppy from eating poop! You’ll also learn why they do it, and most importantly, should you worry!

Should You Worry About Your German Shepherd Puppy Eating Poop?

Generally, you don’t need to worry too much about your puppy eating poop. While it’s not the most pleasant thing to watch, in most cases it’s not going to do any harm.

In fact, it’s actually pretty normal behavior for dogs for a number of reasons (which you’re about to find out).

However, if your dog does eat poop, then there is the risk of them becoming sick or being exposed to diseases, viruses, illnesses, and toxins of the animal who passed the stool.

Luckily, if your pup is only eating their own poop, this won’t be a problem.

Why Is Your German Shepherd Puppy Eating Their Own Poop?

There are a number of different reasons your german shepherd might be eating their own poop. If you can figure out the reason it’s happening, it can often help you figure out how to stop it.

Here are the most common reasons they may be doing it.

Just like humans, a puppy is going to learn most of their behavior from their mum. If they notice that their mum is eating her own poop, or eating theirs, then it’s much more likely the puppy will do the same!

The reason the mother does this is to hide their cubs from predators. In the wild, poop is going to attract wild animals to where the pups are. So obviously it makes sense to get rid of it altogether!

It also helps keep their den clean as well.

Living With A Sick Or Old Dog

If your puppy is a little bit older, then they may be trying to cover up the scent of another dog. Predators would be able to smell a sick or elderly dog from their stool, so your pup may be trying to dispose of it.

Once again, remember, this is perfectly natural and it’s a built-in survival instinct.

To Get Your Attention

Let me guess, the first time you noticed your german shepherd eating poop, you shooed them off, clapped, shouted, or gave them some kind of attention.

If you did, then your pup may do it again just to get your attention. Just like children, some puppies like attention from you whether it’s good or bad.

The more bored your puppy is, the more enticing poop is going to look for them. It’s gross to us, but poop is going to be filled with indicators and clues about animals that are around them.

So make sure your puppy isn’t getting too bored! This is much more likely to happen to puppies that have been left on their own all day.

Puppies need a LOT of food when they’re growing. If your puppy is hungry then poop is going to look like a snack to them.

If you’re feeding your german shepherd enough but they’re still eating poop, then you should take them to the vets.

They could have worms or some other intestinal parasite causing them to be hungry all of the time. This is especially true if they look like they’re losing weight.

And if you’re not feeding your german shepherd enough then start feeding them more.

They’ve Been Punished Before

If you’ve punished your puppy for pooping somewhere they shouldn’t have, then they may see the poop as something bad.

They don’t know where they should and shouldn’t go, so in their heads just pooping is going to get a negative response from you. To avoid this, they’d rather just eat it.

That’s why it’s so important to make sure you’re using an effective training program with your german shepherd.

I know this is disgusting, but certain poop is going to taste pretty good to your pup. Animals that have a grain-heavy diet, for example, may have undigested grains in their poop.

So when your pup decides to eat it, they’re going to be able to taste the grains as well.

We’ve all heard someone say that a puppy only eats their own poop when there are not enough nutrients in their diet. While most of the time this isn’t true, there are times when health problems can make absorbing nutrients harder.

And not only are there diseases that can stop your german shepherd getting the nutrients they need, but there are also diseases that make them hungrier, like diabetes.

(Have you ever wondered if german shepherds have webbed feet.)

If your puppy is new to your home, then they may be eating their stool because of stress. In a lot of cases, this should eventually pass as they begin to feel safer.

And of course, if you think your german shepherd is eating their poop because of stress, don’t punish them. A much more effective way is to use positive reinforcement strategically.

(Find out how to discipline a German Shepherd the right way!)

How To Stop A German Shepherd Puppy Eating Poop!

If your pup is eating poop there are a lot of things you can do to stop them. And remember, you can always do more than one at a time as well!

Here are the best ways to stop a german shepherd puppy eating poop.

Take Them To The Vets

Of course, if you notice your puppy is always eating their own poop then a trip to the vets is in order. This is going to give you the peace of mind that there’s nothing wrong with them. And if there is, it’s going to get treated accordingly.

Remember, you should be taking your puppy to the vets regularly anyway. And if you notice small white eggs in their stool make sure you mention it. As that’s often a sign of internal parasites like worms.

Don’t Give Them Attention

If you notice your german shepherd eating poop make sure you don’t give them attention. Instead, you should use something to distract them. Clapping your hands or shaking a tin full of rocks is normally effective.

And remember, when you do this, don’t even look at them. Once they’ve stopped eating the poop, give them some attention (however, don’t get too close, obviously).

Whenever your puppy is around poop try to entertain them more. Take a ball or toys with you that you can distract them with. You can also take some treats with you which can entice them to stay away from poop.

Another great way to keep them distracted is by using a kong that you’ve filled with food, or something similar. (Great food includes, strawberries, peanut butter, and apples.)

Make Sure They’re Getting Enough Exercise

Another way to stop your puppy from being bored is by making sure they’re getting adequate exercise. You should be taking them for a walk every day, and also playing with them throughout the day.

If you can’t be there to play with them, make sure they have lots of toys they can play with by themselves.

This is the easiest solution for when they’re eating poop in your garden. Every time you notice some out there, just clean it up. By removing it altogether, there’s no chance they’re going to eat it.

…And Keep Them Away

Similar to cleaning it up, if you’re outside, try keeping your puppy away from it. Obviously, this is going to be much harder off the leash (although they’ll also be a lot less likely to do it).

Keep them on their leash and every time you notice poop, place yourself as a barrier between them. As well as this, keep your puppies attention with a treat. And once you’ve safely passed you can give it to them.

If you’re feeding your puppy low-quality food then they may not be getting the nutrients they need. As well as eating their own poop, there’ll be other symptoms of low quality food as well.

You may notice that their coat is dull, they’re skinny, and that they aren’t growing quickly enough. If you do notice this, make sure you talk to your vet.

Keeping your puppy calm will also help lower the chance they’re going to eat poop. If they’ve just come home make sure you spend lots of time with them and showing them lots of love.

As well as this, try feeding them a few more treats and playing with them. And if they want to sit by themselves, let them do that too.

Just make sure you’re not making them anxious.

No is one of the most important commands you can teach your german shepherd. Not only is it going to help them stop eating poop, but it can also stop them from doing something potentially life-threatening.

If you haven’t trained your german shepherd properly, then this is the perfect time to start. Whatever bad behavior your shepherd has, whether they’re eating their own poop, barking at you, or even growling and biting, using the right training program is the key to having an obedient and happy pup.

Just imagine how great it will feel to finally be able to leave your pup alone and not worry about them eating their own poop! Instead, you’ll have the peace of mind that you have a well-behaved pup, and the boundaries you set for them, will always be there, EVEN IF YOU’RE NOT.

So as you can see, a german shepherd puppy eating poop is fairly normal. However, to us it’s disgusting, so you should make sure that you train it out of them as soon as possible.

Here are some of the main points to remember.

Your german shepherd may be eating poop because they’re copying their mom, living with an old or sick dog, to get your attention, because of boredom, because they’re hungry, they’ve been punished for pooping in the past, it tastes nice to them, health problems, and stress.

To stop your german shepherd eating poop you should first of all take them to the vets to make sure everything is okay. After that, you can try not giving them attention, entertaining them, giving them enough exercise, cleaning it up right away, keeping them away from it, changing their food, making sure they’re calm, and teaching them no!

If you do all of this your german shepherd should stop eating poop!

And lastly, if you have any more questions leave them in the comments below. Otherwise, have a great day!