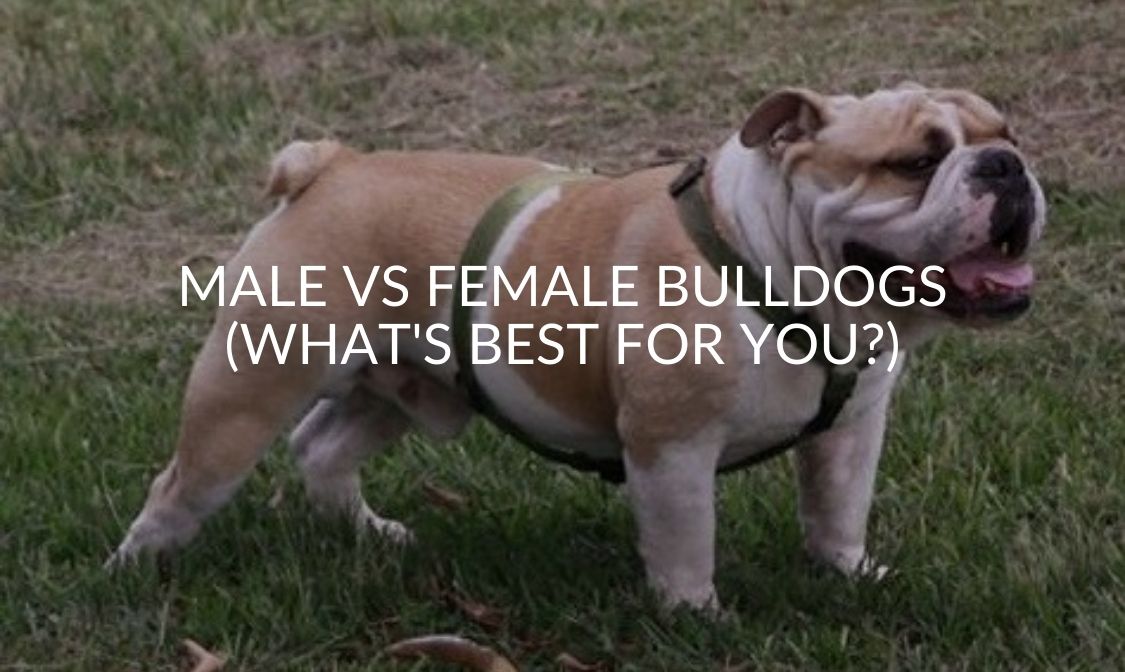 Male bulldogs are energetic, playful, stubborn, and loving. Female Bulldogs are more relaxed, more independent, a little less stubborn, and more protective. Both males and females will be difficult to train and have various health problems, but they can be great family companions.

What Are The Size Differences Between Male And Female Bulldogs?

Male Bulldogs will typically reach a weight of about 50-55 pounds when fully grown. As for their height, they will usually measure between 10 and 15 inches to the top of the shoulder.

The average weight for a fully grown female bulldog is around 45-50 pounds. They stand about the same height as a male Bulldog.

Differences In Size For Male And Female Bulldogs

Male bulldogs will typically be around 10-20% heavier than a female of the same breed. Both males and females have a relatively short and stocky build. Males will have a slightly bigger head and will have a bit more of a “solid” body than a female bulldog, but overall, they will look fairly similar unless you look closer.

What Are The Temperament Differences Between Male And Female Bulldogs?

Male bulldogs generally are easier to socialize with people, may show more aggression, and will be very protective of the family. They like to please their owner and love to be babied. Many male bulldogs will carry a large portion of their playful puppy personality into adulthood.

Female bulldogs will be a little bit more laid back most of the time. They are slightly less playful, less attention-seeking, and more independent. They are less interested in socializing with people, but they will be very protective of one family member. Females may get a little grumpy if they are bothered when they want to be left alone.

Differences in Temperament of Male and Female Bulldogs

Female bulldogs will show less general aggression but will be more territorial than males. If trained and socialized properly, males and females will have somewhat similar temperaments most of the time, with a few exceptions, like when a female is pregnant.

Is There A Price Difference Between Males And Female Bulldogs?

Prices For A Male Bulldog

Prices For A Female Bulldog

Differences In Price For Male And Female Bulldogs

Are There Training Differences Between Male And Female Bulldogs?

Male bulldogs tend to be very playful and get distracted easily. They are very sociable, so training will be very difficult when other people or dogs are around. Food can be a good motivator, but patience and a good routine will be key in training a male bulldog.

Female bulldogs are somewhat easier to train than males, but it is still no easy task. Females are slightly more focused than males and are less interested in playing with everyone and everything that they see. Females will likely be more receptive to training than males when they have a stable routine.

Males and females will share the same relatively low level of intelligence. Bulldogs are incredibly stubborn and tend to do as they please. Males will be more distracted and playful, so the slightly better focus may make training a female slightly easier, but the level of stubbornness in both sexes will make things difficult, but not impossible.

Are There Any Health Differences?

Bulldogs suffer from quite a bit of health problems, and they are one of the breeds that suffer from the most health problems. Males often develop Brachycephalic Syndrome, which causes the smushed faces that bulldogs have. In turn, the dogs may develop heavy panting, excessive slobbering, choking and gagging while eating, and faster overheating than normal.

One of the most critical health problems to consider for female bulldogs is Dystocia, which makes natural birth dangerous and causes bulldogs to have a high puppy mortality rate. It is typically advised to have a veterinarian perform a C-Section as opposed to risking a natural birth.

Male and females both commonly suffer from cherry eye, hip, and shoulder dysplasia, overheating, skin irritation, spine problems, pelvic deformities, and more. Many vets recommend checkups every 6 months for bulldogs to help catch any problems as early as possible. Both males and females will live about 7-10 years. You should know and understand the health problems that bulldogs commonly face before bringing one home.

Are Males And Females More Affectionate?

How Affectionate Are Male Bulldogs?

Male bulldogs are very affectionate to their owners and family. They love to snuggle up on the couch and be near you all day long. Males love to be by your side whenever possible, and they aren’t very interested in the concept of personal space. They love constant attention and being spoiled with affection.

How Affectionate Are Female Bulldogs?

Female bulldogs like affection and can be very affectionate companions, but it is not a constant need. Females will cuddle right up next to you for love and snuggles, but once they are satisfied, they will typically find their own spot to relax.

Differences In Affection For Male And Female Bulldogs

Both male and female bulldogs love affection, but females aren’t quite as obsessed with it as males are. All bulldogs are very sensitive to the emotions of their owners and will try to cheer you up if they sense that you are sad. If you prefer a dog that will show some affection but still give you some personal space, then a female bulldog would be better. For those who want a big snuggly lap dog, a male bulldog is what you want.

Are Males Or Females More Independent/Dependent?

How Independent Are Male Bulldogs?

Male bulldogs are basically the definition of dependent. They need constant attention, they want to be by your side all the time, they want to please their owner and be rewarded for it with affection, and they are very clingy to those they love.

How Independent Are Female Bulldogs?

Female bulldogs are considerably more independent than males. They don’t live like a hermit that wants no interaction, but they definitely like their personal space occasionally. They are less concerned with pleasing their owner and less reliant on positive affection.

Differences In Independence For Male And Female Bulldogs

Females are more independent and willing to hang out alone occasionally. For the males, this relates back to their desire for affection, where they crave that constant attention and affection. Females may get a little bit grumpy if they want some space, but you want them to cuddle or play.

Which Is Better For Families?

How Are Male Bulldogs With Families?

Male bulldogs love to play and have plenty of energy to keep it up all day long. Males are usually playful and gentle with children making them a great choice for families with young kids who love to play.

How Are Female Bulldogs With Families?

Female dogs are pretty laid back and relaxed when it comes to playtime. Females will still play with kids, but when she is done, she will simply walk away. Females are very protective of their family, so she will watch over and protect your children as if they were her own.

Differences In Male And Female Bulldogs For Families

Both male and female bulldogs are great with kids. Males will be more of a playful companion while females will be playful yet protective and motherly. Something to remember is that both males and females are incredibly protective over their food. No matter how calm they usually are, they may snap if a kid gets too close while they are eating.

Which Is Better With Other Pets?

How Are Male Bulldogs With Other Pets?

Male bulldogs are not a fan of having other dogs in their home. They are not necessarily dominant, but they are territorial. If a male bulldog is not properly socialized with other dogs during its whole life, then they could be very aggressive toward dogs that they feel are an intruder.

How Are Female Bulldogs With Other Pets?

Females are more relaxed and laid back when it comes to other dogs, but they may still show some aggression if she feels that herself or her family is threatened or they feel crowded. Female bulldogs need their personal space and may get snappy if another dog is trying to play when she doesn’t want to.

Differences With Male And Female Bulldogs With Other Pets

Who Is A Male Best Suited For?

A male bulldog is best suited for someone who wants an energetic dog that wants constant cuddles and attention. Males are going to be very playful and hyper as well, so they can be a great choice for those who have children who like to play. Since they are stubborn and difficult to train, it is important to be someone who has patience if you are going to have a male bulldog. They are more playful with children, but they can be rough if not handled with care, so we recommend them for homes with older children primarily.

Who Is A Female Best Suited For?

Female bulldogs are laid back and much more independent. This means that they are best suited for someone who wants a more relaxed dog that will offer some love and affection but doesn’t want to be a lap dog 24/7. They are very protective and motherly towards children but may get annoyed if kids are trying to play with her when she doesn’t want to play. Females are still incredibly stubborn and will require quite a bit of patience during training.

Want To Train Your Bulldog With Peace Of Mind?

If you haven’t trained your Bulldog properly, then this is the perfect time to start. Whatever bad behavior your shepherd has, whether it’s barking at night or other bad behaviors, using the right training program is the key to having an obedient and happy pup.

Just imagine how great it will feel to finally be able to trust your Bulldog completely and never worry whether they’ll be naughty or not. Instead, you’ll have the peace of mind that you have a well-behaved pup, and the boundaries you set for them will always be there, EVEN IF YOU’RE NOT.

As you can see, male and female bulldogs can be similar, but also very different depending on the dog, the training, and the environment that it is in. It is important to consider the possible health problems that bulldogs may develop. Choosing a dog with a compatible temperament with you and the environment that the dog will be in is crucial. Using this guide, hopefully, you will be able to decide whether a male or a female bulldog will suit your situation better and lead to years of happiness and love instead of frustration.