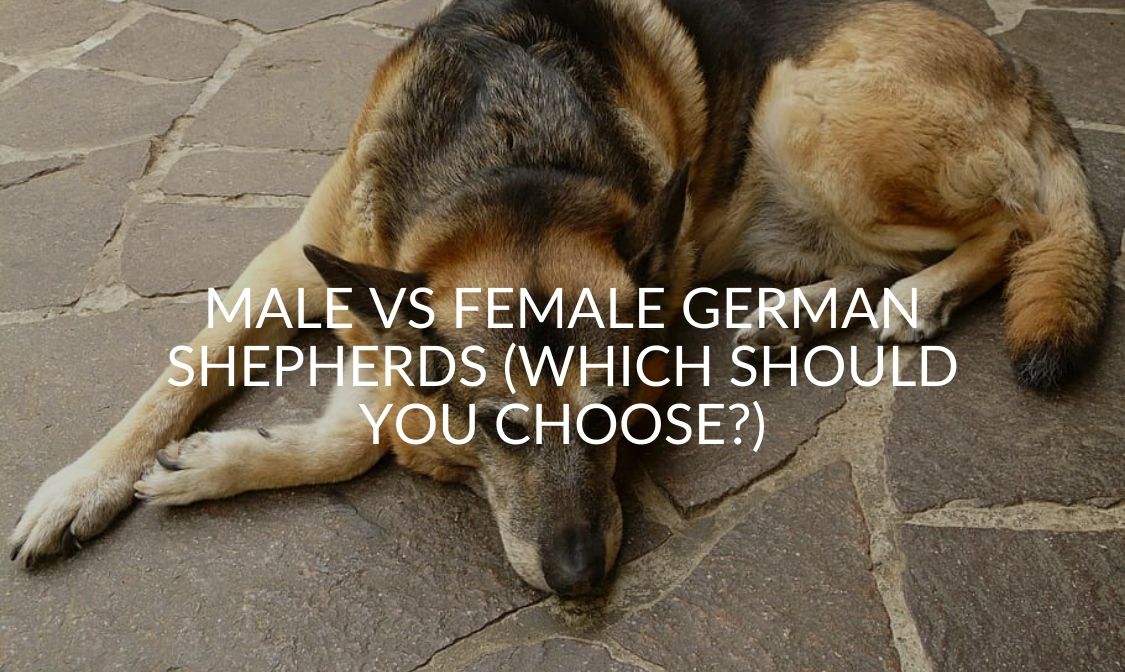 Male Vs Female german shepherds, which sex is going to be right for you (and your family)? In this article, we’ll take a look at all the differences between the sexes, so you can make an informed decision when buying your pup!

However, both boys and girls are great companions! And at the end of the day, it’s all going to depend on your own personal needs.

So keep reading to find out more.

An In-depth Look At Male Vs Female German Shepherds

When looking at male vs female german shepherds there are a few things you’re going to need to weigh up. The different sizes, temperament, aggression levels and much more need to be taken into account when deciding which sex to go for.

So let’s start with their size.

The size difference between the two is probably the first thing you’re going to notice. However, it is important to remember these are just averages. Sometimes there are going to be females that are bigger than males, and males that are smaller than females.

As you can see, male german shepherds are a lot larger and physically more imposing. They are generally more muscular and have a larger head. This makes them ideal for protection as they’re much more physically intimidating.

But females aren’t without their strengths either. While they may not look as physically imposing, they’re still going to do a great job of protecting your family. However, this isn’t where females truly shine.

If you’re interested in dog shows, then a females smaller, lighter size makes them much better suited than males.

(Have you ever wondered if german shepherds make good guard dogs?)

Next up, we’ll look at who is easier to train. For most people, trainability is one of the most important aspects of their dog. After all, the last thing you need is an unruly pup running your life!

Fortunately, german shepherds are one of the most intelligent breeds, so they’re definitely capable of learning. However, which sex is easier to train?

So when it comes to training, female german shepherds are a lot easier to train as they learn quicker. The only time you may have a hard time training them is when they’re in heat.

On the other hand, due to their larger size, if you want to train your german shepherd to protect you, then a male is still better to train because of their size.

But if you’re interested in a show dog or agility dogs, then females are your best bet.

(Ever wonder if you should spay your female or neuter your male?)

This is one of the most important factors to look at, and obviously, it’s the one with the most information. When you’re choosing your german shepherd, the temperament they have will be a large factor in whether they’re the right fit for your family.

Here are the general temperaments of males and females. However, remember, this isn’t always the case and sometimes the temperaments can be the other way round.

As you can see female german shepherds are often better in family settings, whereas males will form a much stronger bond with one person.

But in both cases, proper socialization and training is the best thing for them. It will teach them the behaviors they need to learn, and to avoid aggression.

What About Feeding A Male Or Female German Shepherd?

Another thing you’ll need to take into account is feeding your german shepherd. Obviously, because males are typically larger in size, they tend to need more food.

While the quality of the dog food, build of your dog, activity levels and metabolism must all be taken into account, in most cases, it will end up costing you more to feed a male german shepherd.

However, your german shepherd’s dietary requirements can also affect this. For example, if a male can’t eat grains, but a female can then it may become more expensive to feed the male, etc.

(Check out the 30 pros and cons of owning a german shepherd!)

One thing you need to be aware of when you’re getting a female is that they’re going to go into heat twice a year. The first time this will happen is when their half a year to a year old. On average this is going to last 2-4 weeks, however, sometimes it will be shorter and sometimes it will be longer.

During this time they are more likely to become pregnant so you’ll have to keep them on the lead and away from any males, who will be able to smell that they’re fertile.

Of course, this can all be avoided if you’re willing to spay your german shepherd. I’d recommend spaying personally as it reduces the chances of them getting certain types of cancer and illnesses (Which unfortunately one of my dogs died from).

Find out what you need to know about spaying your german shepherd.

If you don’t spay your german shepherd, when they’re in heat they will constantly drip blood in small amounts all over the floor. You can buy period pants specifically for dogs to stop this, however, some german shepherds refuse to wear them.

And, when they are in heat, they’re more likely to become moody, and could possibly snap at someone.

When it comes to health issues, males and females both tend to suffer from the same ones. (However, due to females going in heat, they often require a little more care.)

The most common health issues you can expect to find in males and females are joint issues such as hip and elbow dysplasia, as well as bloat.

Fortunately though, if you buy your german shepherd from a reputable breeder, you can lower the risk of health issues.

(Do you ever wonder why your german shepherd has floppy ears?)

On average, female german shepherds are going to live longer than males. If you’re going to get a female you can expect her to live for just over 11 years (on average), whereas males live for just under 10 years on average.

Once again though, it’s important for you to take into account the breeder that you purchase them from. If they have a bad start in life, they will most likely have a lower lifespan.

Honestly, if you’re just a casual owner who loves german shepherds, then I’d personally recommend getting females. For the most part, they tend to be easier to train and friendlier.

They’ll love you and your whole family equally, and less aggressive over toys etc.

However, if you live alone or you’re willing to put the time in, then males can be a great choice!

Most importantly, both males and females are going to be extremely rewarding!

(Find out more about whether german shepherds make good pets!)

Now you know the main difference between males and females and you can make an informed decision. Whatever you choose, you’re going to love your pet. But here are some of the main points to remember.

If you liked this article check out the rest of the website. Otherwise have a great day!