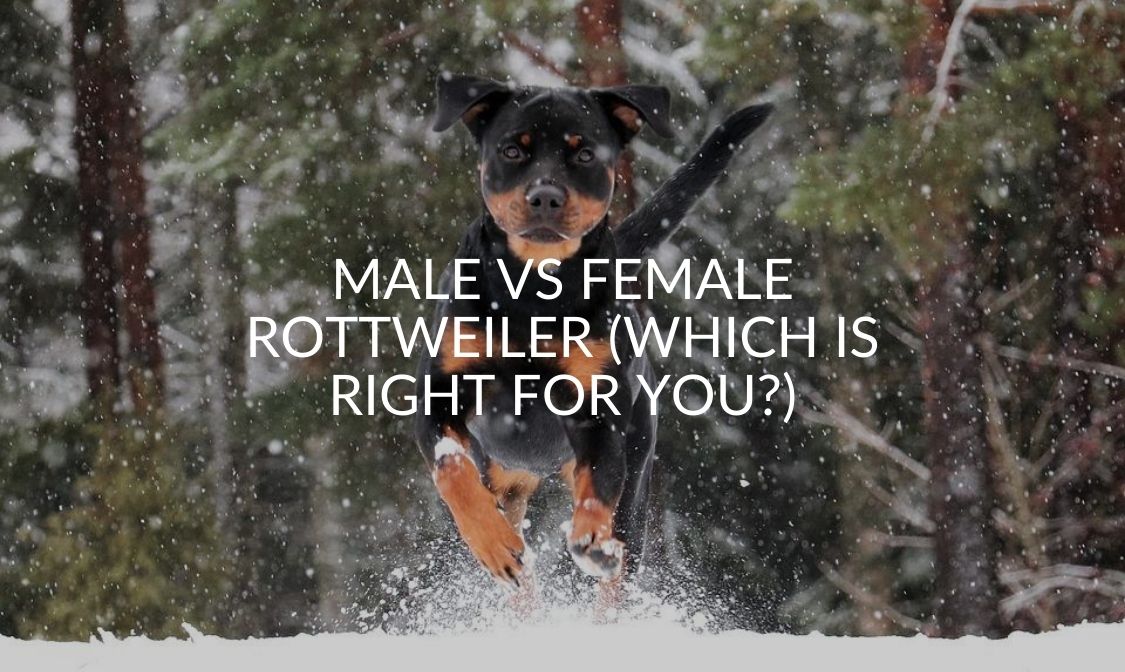 When looking to get a new pet, it is important to weigh up what breed, sex and size will be a good fit for your household. In this article, we will be discussing the differences, if any, between male and female Rottweilers, so you can come to a good conclusion of which sex will be best for you.

I have always had male dogs, so when wanting a Rottweiler it seemed justifiable to get another boy. In my experience of a male Rottweiler, he is the most loving, caring yet stubborn dog!

However, the key difference I noticed was the size he has grown to compared to my Labrador! When going to choose our beloved Rottweiler, we were introduced to the mum, dad and the rest of the litter. The mum was significantly smaller, while our pups dad looked like a small horse!

Out of the litter we chose Hugo, who was a little more reserved than the rest of his brothers and sisters, but after a few weeks of bringing him home, that all changed!

He is now two years old and weighs around 54 kg! However, he would still look small compared to his dad! This giant dog also doesn’t realise his own size! In his mind, he gets up on the sofa and your lap with ease, as he constantly wants to be loved… and he is!

However, male and female Rottweilers can differ substantially, and their temperaments can be different considering the environment that they are in.

So let’s compare the two to get a better understanding of both!

If the size of your dog matters to you in terms of room then the female Rottweiler may be the better option. That is not to say that female Rottweilers are small, but they won’t grow as big as their male counterparts.

A fully grown female Rottweiler can range anywhere between 34kg to 47kg! If you’re looking for a hefty dog within regards to protection, then the Rottweiler would be an ideal pet for you.

However, we need to remember that a dog this size will need plenty of room to roam around the house and garden, or if not you will need to ensure that their are places close by that you can take your pet for long walks!

Looks will also be deceiving when you first get your Rottweiler puppy, as the females size will more than quadruple! Fully grown they will also range from 55 – 64 centimetres tall!

If you want a bigger dog, then the male Rottweiler may be more suited, if you have the space to accommodate it!

As I stated before, my own dog is bordering the high 50’s in kilograms and that is about average for males! They will range from between 49kg to 60kg! Males can also be anywhere between 60 – 69 centimetres tall!

Not only will you have to consider the amount of room that your Rottweiler will take up, but also how much a dog this size eats!

(Have you ever wondered how long your rottweiler will live for?)

In terms of temperament, we want to look at the parents of your Rottweiler puppy and the environment that you are bringing them into.

We want a loving connection with our pets, but also they need to know who is boss! Rottweilers are stubborn, but are average on the intelligence spectrum of dogs. This means that as long as they are trained well and you are strict when you need to be, you should have little issue.

Female Rottweilers may be known to be more alert and calmer of the two sexes. That is not to say that they don’t possess a hyperactive side! If you want a big dog then you will need to expect high energy levels, as Rottweilers require a lot of exercise!

This is perfect if you are looking to spend more time outdoors, but if you do not have the time, then I really would recommend a smaller dog!

It has been stated by previous owners that female Rottweilers are easier to train. There is no statistics to back this up, but from speaking to others that own Rottweilers, they respond better to commands. However, that is down to the owners discretion and it may be due to differing training techniques.

The main difference between male and female Rottweilers is the energy levels. I believe that male Rottweilers are all round goofballs and are definitely not as scary as they are made out. Anyone that has owned one will no doubt tell you the same.

With my own Rottweiler we walk him twice a day minimum, and we live in the centre of a national park so he is getting a LOT of exercise so is worn out most days.

However, we have a rigid routine which definitely helps with his obedience and recommend it to any dog owner in general.

Male Rottweilers may also be a little more stubborn that females, which I feel is down to the goofiness of them! If they can’t get their own way, I’ve known a fair few to sulk!

Overall, both sexes of Rottweilers are super loving as long as they have created a bond with you! Their temperaments aren’t too different, it’s down to how to train and interact with them in general, but once you have created that bond in the family you won’t find a more loyal breed!

(Have you ever wondered why rottweilers get their tail docked?)

Speaking on loyalty, you may be acquiring a Rottweiler for protection purposes, as they are known to be big, aggressive dogs!

There aren’t many differences with regards to protection when thinking of having a male or female Rottweiler. We may consider that due to the maternal instincts of a female that they may be more protective over who they class as their own family members.

Rottweilers can be vocal when they hear noises out of the ordinary, and female Rottweilers may seem more alert. However, when a Rottweiler loves you and feels that you are their owner, they will be extremely protective.

The only downside of a female would be, they aren’t quite as big as the males, but they can still be a very intimidating breed to those that have never owned them!

Due to the size of males, you may want to invest your time, money and love into a male Rottweiler. As stated previously, they will be vocal if they don’t think something is quite right. My own Rottweiler has barked at me when I’ve worn a jacket that seemed a bit out of the ordinary to him, so keep that in mind!

Male Rottweilers can be the goofier sex, however, like the females, once they feel a part of the family, they will definitely be very protective over you. Both sexes are aggressive when becoming protective over their family members, but the male has more of an advantage when it comes to size and height.

Either way, you can feel secure with either sex.

(On that note have you ever wondered whether rottweilers make good guard dogs? Or worried that they’re aggressive and dangerous? If so then check out those articles, and if you’re even more curious, find out whether they’re good with other dogs, cats, or children and babies!)

With cost, both sexes have mostly equal expenses. They will both need at least two good meals a day, and a vast amount of protein! There are ways to bring the cost down, e.g. I will mix their meat in with dry food to bulk it up a little more, but it is what you prefer. However, you will need to buy a substantial amount of food for a Rottweiler.

Then we need to think about the cost of vet trips, worming, flea tablets, spaying and neuturing, if you so decide and insurance.

Insuring a Rottweiler can be more expensive as not only are they a bigger dog, so come with bigger risks, but they may have underlying health issues that Rottweilers are prone to.

If you are looking for a pet that will cause you little expense, then a Rottweiler is definitely not for you.

(Not sure about rottweilers? Have you ever wondered whether a male or female german shepherd will suit your family better?)

Although you may be allowed to spay your female Rottweiler after 12 months, we recommend waiting until your dog is 24 months old. This is because your Rottweiler does not stop growing until 24 month’s, and you could face other problems with their health if you do not wait.

However, if you are not considering this and would like your Rottweiler to have puppies at some point you will need to remember that they go in heat twice a year, and it can get messy!

The cycle will last 21 days, and you will need to be wary that they will bleed during this time. This process will start at the age of 1, so your dog will be able to produce puppies from this time.

If you do not want your Rottie to have puppies, and you also do not want her spayed, then you must also keep her away from male dogs so she does not become pregnant.

Along with the same reasons as female Rottweilers, you will want to consider neutering your male Rottweiler until around 2 years old. This is so they do not have any problems with their growth that would be detrimental to their health! Anything we put our dogs through we need to think of the future risks!

Problems I have faced in the past with not neutering male dogs is other dogs possibly becoming threatened or becoming aggressive to my own males. By nature, I have always had really calm dogs, no doubt due to their environment, so they aren’t ones to cause any aggression, and the problem was getting persistently worse, so hence this was a last resort.

The main reasons people choose to neuter male dogs is that they don’t want them to impregnate female dogs, but it is known to considerably calm their dogs down! Although this may not always be the case, it worked for our Rottweiler.

Some other things to consider if you are wanting to purchase or adopt a Rottweiler, would be the health risks.

Like many other breeds, they come with there own set of health issues which include:

So, Male Vs Female Rottweiler, Which Is Better?

There is no better sex when it comes to Rottweilers, as both will give you different characteristics that you may be looking for!

Females will tend to be smaller than the males, but they are considered a lot more protective of their own families! On a similar note, males will provide a lot of love and companionship, but will definitely take up a lot more room!

Both sexes have a stubborn streak, so that is something to be aware of when getting a Rottweiler! My own Rottweiler has a tendency to ignore me on occasion! For the most part he is a fantastic addition to the family and I couldn’t imagine the family without him!

Whichever sex of Rottweiler you decide to choose I know that you will not regret it. This particular breed of dog has so much personality to offer that you can’t help but fall in love with them!