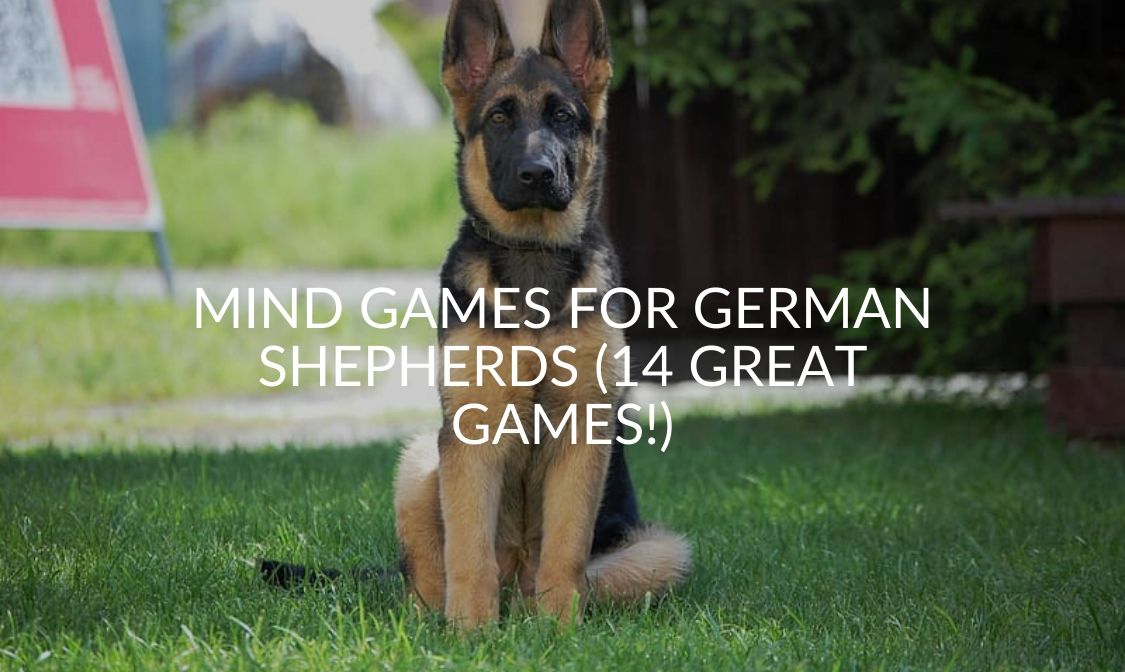 There are so many different ways you can entertain your dog. However, mind games for german shepherds are some of the best! As one of the most intelligent dogs around, you’re really going to have to go above and beyond to stimulate their brains.

So keep reading to find out all the different mind games for german shepherds!

So let’s get started!

To play the game you’ll need to do the following.

Once your german shepherd understands the game, they’re going to love it! It’s a great game that will entertain you both!

This is another great game for when you don’t have much time. And it’s going to tease your dog’s mind for hours.

If you’re not sure what treats to give your german shepherd then why not try some tasty snacks like shrimp, eggs or bananas!

What’s good about this game is that you don’t need to give your german shepherds treats to play it. So if your pup is overweight or you think they’re becoming overweight, it’s a great alternative to treat based games.

This is an EXCELLENT game for dogs that struggle with learning when to be calm and when to be excited. However, if your german shepherd is very excitable then you’ll need to be extra patient with them.

This is such a great game to play with your dog, and you’ll feel like you’re really bonding with them after playing it. While this game is best played outdoors, if you have enough space in your house, it can also make a great indoor game too!

This game isn’t for you if you don’t have patience. In fact, it will be a few weeks before your german shepherd will be able to play the game properly. However, once they understand what the aim of the game is, it will really test their minds.

(For best results with ring stacking, you should use clicker training.)

This is one of the most challenging mind games you can play with your german shepherd and it’s really going to test their mental abilities in the early days. So remember, to be patient and take your time with them. Eventually, they’ll understand how to play the game.

If it’s a rainy day outside, and you want some entertainment for your pup indoors, then this is a great choice.

Indoor agility courses are a great way to keep your german shepherd’s mind entertained, however, of course, they can be annoying to set up and clean up afterward.

This is a great game to play with your dog, however, it does take a bit of brainpower. And while you can move on to harder versions of the game, if your german shepherd never quite grasps it, then you may have to keep it simple.

If your german shepherd has trouble guessing it doesn’t mean they’re not smart. Dogs are intelligent in different ways (particularly german shepherds). And if they’re not good at guessing what’s under a cup, then they’ll still be great at many other things.

Showing Them A Magic Trick

The magic trick is a lot easier than the cup game, so if you’re short on time it’s often a great choice.

You may have played Hot & Cold with friends before, but did you know you can also teach your german shepherd to play it as well. Hot & Cold works best with a clicker, although you can do it without one too.

One thing to note is that if your german shepherd is easily frustrated, then this may not be the best game for them.

(On the subject of cold, have you ever wondered whether your german shepherd gets cold?)

If you want to shake up a game of fetch with your pup, then obedience fetch can be a great way to do this.

If your german shepherd has a high repertoire of tricks they know, then the next trick is a great game you can play to keep what they know fresh in their minds.

(This works even better if you already have a click trainer you use with your dog.)

When your german shepherd gets really good a the game you can easily stretch it out for 15-20 minutes.

This is another incredibly simple game that will also teach your pup a new trick! (However, if they’re overweight, then this isn’t the game for you.)

If you’re tired of cleaning up after your german shepherd, then toy pickup is the best game you can play. Instead of having to pick up all of their toys, they’ll pick them up and put them away all on their own!

As you’ve just seen german shepherds are able to remember the names of their toys, so teaching them the name on its own is still a great mind game for your pup! Here’s how to do it in more depth.