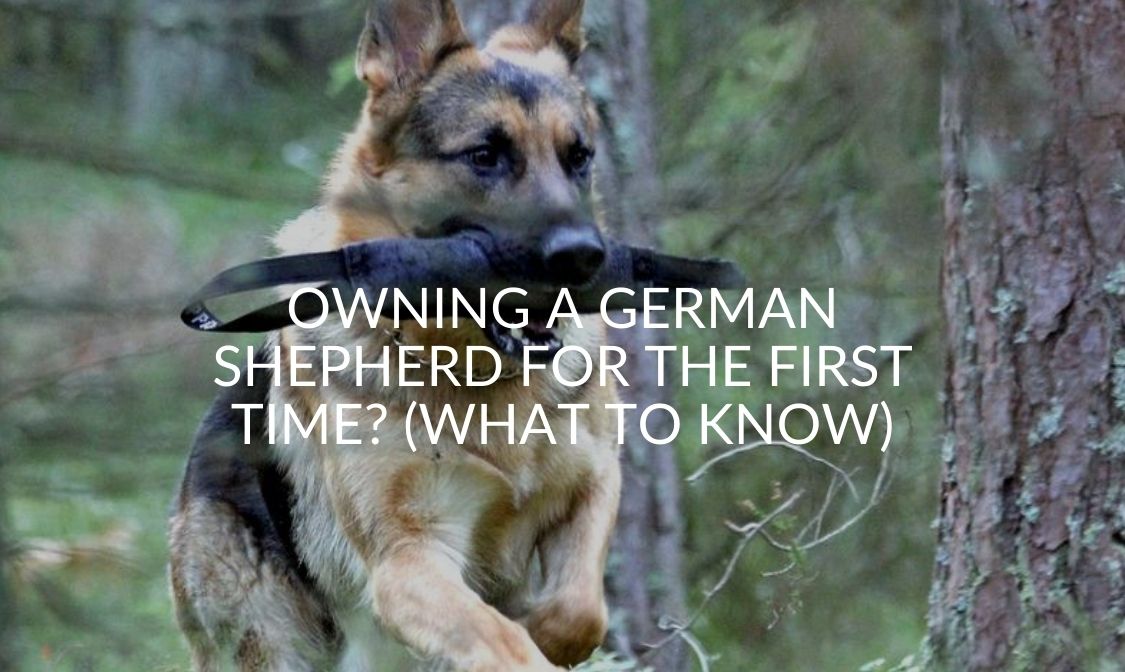 Are you thinking about owning a german shepherd for the first time? Or perhaps you’ve never had a dog at all before and you love german shepherds. If so then this article will give you all the insight you need to decide whether a german shepherd is for you, and more importantly, whether you can handle them as a first time dog!

Let’s start with what you should know about a german shepherds temperament, behavior and needs.

They Need Plenty Of Exercise

One of the most important things a german shepherd needs in their life is plenty of exercise. You’ll need to take them out for at least an hour a day, preferably off leash. And it’s not just walking, they need. Swimming, running, fetch and playing with other dogs are all essential for a german shepherds well being.

If you can’t provide your german shepherd with this, it is possible to hire people to take them out with other dogs, which they’ll absolutely love! If you don’t give your german shepherd enough exercise every day, then the chances are they may expend a lot of energy in your home (which often results in things being broken).

Mental Stimulation Is A Must

This can be in the form of training, playing, toys and experiencing new things. Remember german shepherds are HIGHLY intelligent dogs so you need to nurture their intelligence and keep their minds engaged.

Fortunately, one benefit of this is the fact that they’re extremely easy to train if you’ve got a strong enough personality for them.

(If you’re interested in training your german shepherd then you should check out Brain Training For Dogs. It’s a fantastic program that will show you exactly how to train an obedient and more importantly happy pup! It uses positive reinforcement instead of punishment which is proven to be more effective! You can also read the review too!)

Another thing you need to understand about german shepherds is they may possibly end up loving you a little bit too much. This means whenever you’re walking around the house they’re going to follow you like a shadow.

If you like your own space or don’t want a pet that’s so needy, then they may not be for you.

Lastly, german shepherds are big dogs, but they’re still going to think their little lapdogs. This often means that they’re going to clamber over you. Not only this, but because they don’t quite realise their large size, they’re often a little bit clumsy and love to play rough!

They’re Going To Need To Be Groomed… A Lot

Because german shepherds have a double coat it means they’re going to be constantly shedding. As well as shedding all year round, they’ll also blow their coat out twice a year (they’ll shed massively). They do this during the build-up to winter, and just before summer.

(If you’ve just purchased a german shepherd here are some of the best dog brushes for shedding.)

Because of this though, you also need to make sure that you’ve socialised them properly. If they’re not socialised then they’re much more likely to be aloof around strangers and sometimes even aggressive.

They Can Be Aggressive To Other Dogs

If you don’t socialise your german shepherd around other dogs, then they can often become aggressive to other dogs. Fortunately, it’s not hard to socialise your pup. You want to start early at about 8 weeks old.

(Here’s a handy article that will teach you exactly how to socialise your german shepherd.)

Unfortunately, if you’re going to get a german shepherd you need to know they’re much more likely to get dysplasia. Because of this you need to make sure you’re giving your german shepherd the right amount of exercise, proper nutrition and purchase them from a reputable breeder.

Even after all of this, they may still end up with it just because of their genetics.

(Find out more about elbow dysplasia in german shepherds.)

Questions To Ask Yourself Before You Purchase A German Shepherd

Before you purchase a german shepherd for the first time, here are some questions you should ask yourself to make sure you’re ready.

How Much Time Do You Have?

German shepherds are social dogs, so you need to make sure you can spend enough time with them. If you have a standard 9-5 job and you’re going to be leaving them alone all day then they’re going to become extremely unhappy.

Ideally, you shouldn’t leave your german shepherd alone for more than 6 hours a day, any more than this and they’re going to become extremely lonely.

If you do have to leave your german shepherd alone for long periods every day, you can leave them at doggy day care or with a friend to make sure they’re happy.

Do You Have An Active Lifestyle?

If you don’t have an active lifestyle, then you may not be a good fit for a german shepherd. They’re definitely not a dog that you take out on a leash once a day and that’s it.

To truly keep them happy and make sure their mind is stimulated you need to be taking them on adventures all the time. German shepherds absolutely love the beach, hiking and anything with high levels of activity.

If this doesn’t sound like you, then you may be better off buying a dog that doesn’t need these requirements.

Can You Afford One?

While you may have the initial money to buy a german shepherd, the price definitely doesn’t stop there. You’ll need to be able to pay for all of the things they need such as a bed, food, new toys, insurance and most importantly, be prepared to pay if anything goes wrong.

While most young dogs aren’t going to have a problem as your german shepherd gets older they may end up having a lot more problems that can quickly become much more expensive.

On top of all this, you want to make sure you’re paying extra to purchase your german shepherd from a reputable breeder. While this is a bigger upfront cost in the beginning, in the long run it’s going to be a lot cheaper. And of course, not only is it good for you, it also helps put an end to puppy farms as well.

Is Your House Big Enough?

If you’ve not got a big house, then you’re going to want to think twice about having a german shepherd. Not just for them, but for you two. German shepherds are like bulls in china shops. They’re not fully aware just how large they are so they may end up breaking things that you don’t want broken.

As well as this, a bigger house is going to give them plenty of room to move around and a garden will help them stay preoccupied throughout the day.

A small side note you should be aware of is that german shepherds can often be chewers when they’re growing up. If you don’t have a big enough space, then they’re a lot more likley to be bored, in turn making them a lot more likely to begin chewing.

Do You Have a Family?

Another thing you need to ask yourself is whether your family is going to be a good fit for a german shepherd. This doesn’t include children, but it also includes any other pets you may have as well such as a cat.

You’ll need to be particularly aware if you’ve got children that are a young age as they may be too rough or hurt your german shepherd. Which could result in your pup lashing out.

Likewise, if you already have a dog or cat, they may not take too kindly to a german shepherd either. And in a lot of cases, it’s not uncommon for power struggles to occur.

All of this and more need to be taken into account before getting a german shepherd. However, it is important to stress that with the right socialisation most problems can be overcome.

Are You A First Time Dog Owner?

Another big thing to take into consideration is whether you’re a first time dog owner. If you are, then german shepherds may not be the best choice for you. While german shepherds are relatively easy to train, if you’re not confident in your own ability, then they may end up overpowering you.

Remember german shepherds naturally want to be leaders, so in the early days there may be a power struggle. If you’re not 100% confident you can be a leader, you’ll end up with a very unruly german shepherd.

How To Raise A German Shepherd Successfully

Here are some of the main things you need to remember if you plan on raising your german shepherd successfully. If you do this, then you’re going to end up with a happy, loyal german shepherd.

As you can guess by now, one of the MOST important things you can do when raising a german shepherd for the first time is socialize them. With proper socialisation you’re going to stop a whole bunch of problematic behaviors.

But it’s not just socialization to stop them behaving badly around other dogs and people. Exposing them to the world as much as possible is going to help stop them being skittish and scared of everything.

For example, if a car honks their horn near them, your german shepherd isn’t going to end up barking or growling at it. They’ll just ignore it because they think it’s normal.

(Find out how to socialize your german shepherd.)

Positive Reinforcement Is The Best Way To Teach Them

Using positive reinforcement instead of dominance or punishment is the most effective way you’ll be able to raise your german shepherd successfully. And it’s something that’s recommended for all first time german shepherd owners.

When you punish your german shepherd or try to be dominant over them, you only teach them to fear you. This means, that while they may listen to your commands they’re not going to be happy. Not only this, but instead of removing any problem behaviors, you’re just going to teach your pup to hide them. And they may end up lashing out in other ways.

But if you’re training them with positive reinforcement, they’ll see and training as rewarding. Which is going to make them a lot happier.

If you want to know the best way to train your german shepherd then I highly recommend checking out Brain Training For Dogs.

Spend As Much Time With Them As Possible

When you get your german shepherd you’re need to going to dedicate as much time as you can to them. They are going to see you as part of your pack, and if they’re away from their pack they’ll become stressed, lonely and sad.

So before getting a german shepherd, you need to make sure you’re willing for this commitment for the next 13 years. If you’re not, then they’re definitely not the dog for you.

As you can see owning a german shepherd for the first time is no small task. It’s a life long commitment that is going to require your constant dedication and consistency.

However, if you’re willing to do this, then it’s going to be extremely rewarding for you and them. And you’ll have a friend for life.