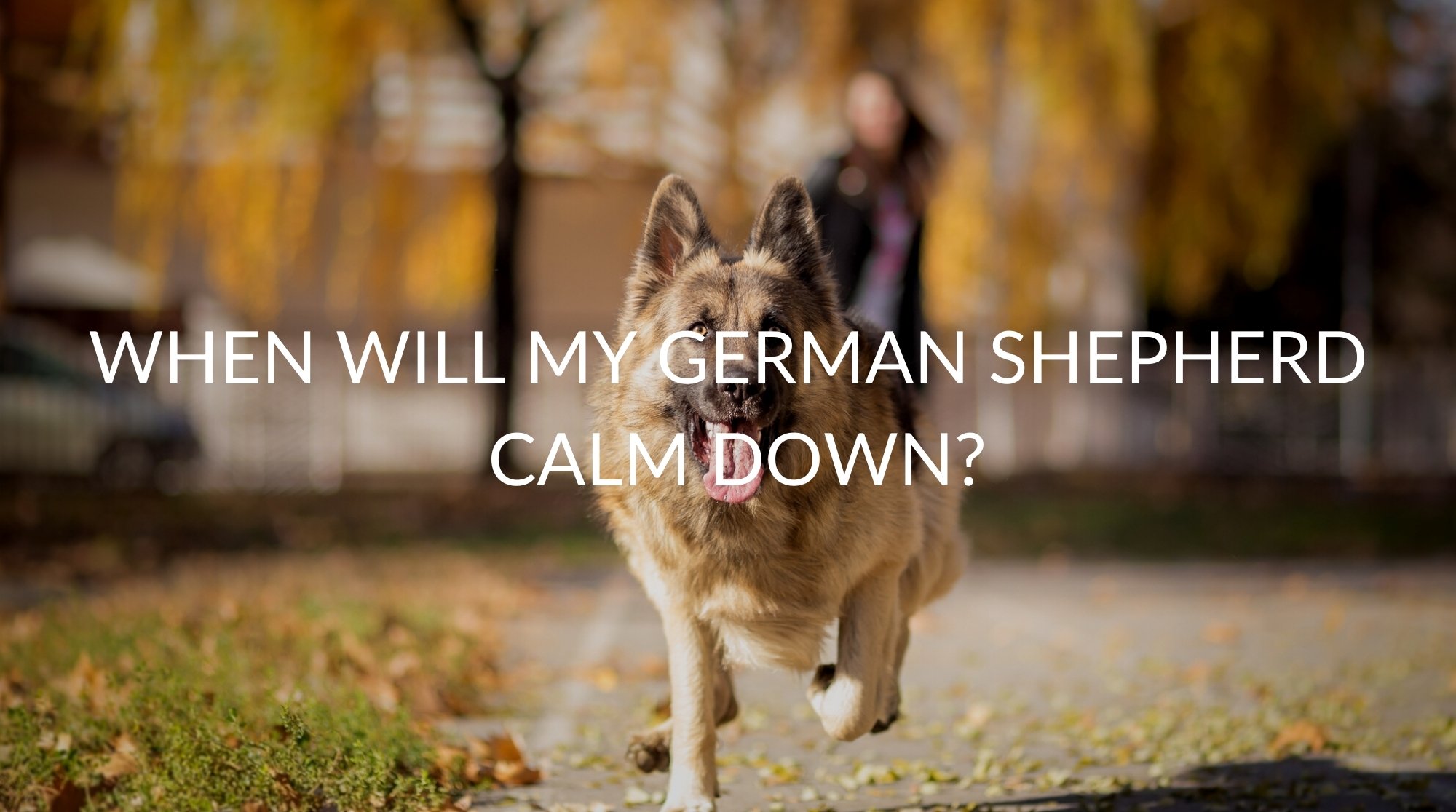 One of man’s best friends is the German Shepherd. Known for its loyalty, courageousness, and intelligence—it is one of the most popular breeds recognized by the American Kennel Club (AKC). German Shepherds are part of the Herding Group, meaning that they are particularly intelligent and protective, but this can be both good and bad for dog owners!

Despite all good intentions, it is frequently noted that this breed seems to be incredibly hyper as puppies—leading many to wonder, will they ever calm down? Luckily though, with a few key insights and ideas from this article on how to manage this rambunctious breed—there is hope yet!

When Do German Shepherds Calm Down?

It is hard to resist a puppy, and German Shepherd puppies are no different. Most German Shepards will always be full of energy, but there are distinct periods in their lives when they will have more or less – and are easier or more challenging to mold through training.

Unfortunately for many owners though, right around the age they may bring these dogs home to their families (2 to 4 months) is when the “hyperactivity” becomes apparent. These dogs become more active at this time and have a short attention span. So while this is a good time to start training, it will also be very challenging.

Five Months to One Year

The period of time from five months to one year is pretty critical for German Shepherd puppies. During this time, the German Shepherd enters adolescence. Many note that dogs will only be calm during this period when they are asleep, which can make things very challenging for owners!

Other problematic behaviors such as humping, aggressiveness, or marking can also appear during this period, as well as challenges in social settings with other animals or people if they aren’t routinely exposed to social settings.

One to Two Years

As the dog matures, its temperament and activity level will begin to be realized. Any behaviors that have not been consistently trained can become more pervasive and problematic. Behaviors that were “cute” while they were puppies are often far less cute as adults. And dogs with a less active lifestyle will likely be more prone to hyper outbursts and behavioral issues in general.

Once reaching 2 to 3 years of age, the point at which they reach maturity. During this time, their attention span finally beings to increase, and they also start to calm down some. As adults, the efforts from training can be better realized and bonds with owners and significant family members really solidified.

When they approach the geriatric phase at age 7, owners will see yet another dip in their activity levels or hyperactivity. German Shepherds will usually be more hyper than other breeds throughout their life, but as they mature, their level of calm does eventually increase. 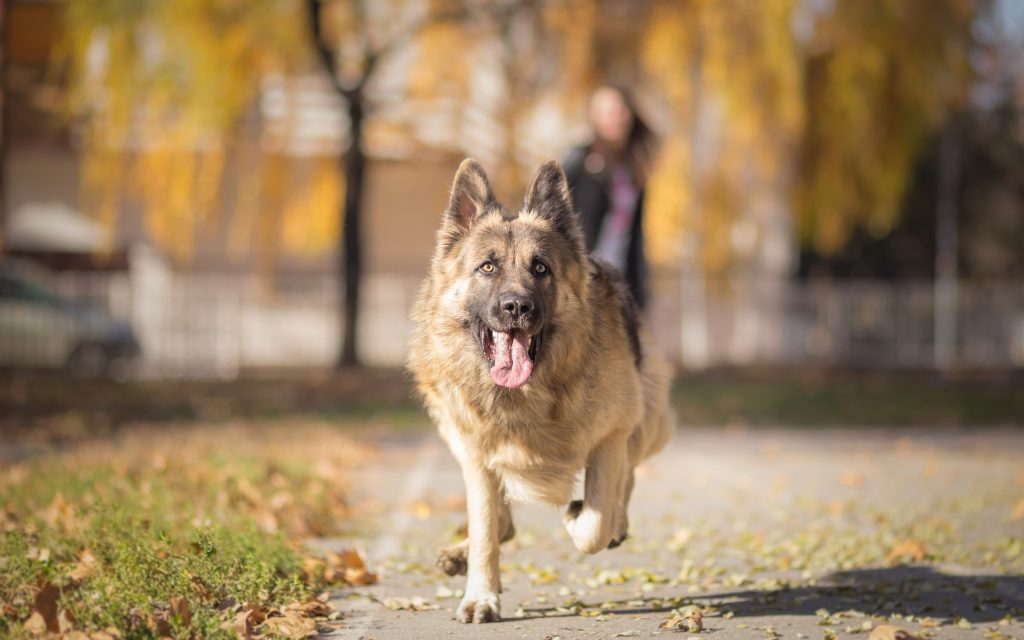 The Causes of A German Shepherd Who Won’t Calm Down

Every dog is unique and won’t always follow the glide path outlined above exactly, but what happens when your dog never seems to calm down? Here are a few reasons that might explain why your German Shepherd is still hyper and could provide clues on how to intervene.

Loyalty is a great trait of German Shepherds, but it can also be a double-edged sword. One reason they may not be calm can be that they are constantly trying to seek out attention—particularly from their owners, or significant people in their life. While it is great to be loved, it can be too much of a good thing when it leads to problematic behaviors.

Boredom or Lack of Mental Stimulation

German Shepherds are an active breed, so it doesn’t take much for them to become bored. This is particularly true when they are not getting enough exercise or stimulation. Without proper activity, this breed seems to become increasingly hyperactive.

With many people working from home since the COVID-19 pandemic, many dogs have gotten used to having their owners around them most of the time. As owners go back to work, this has fueled separation anxiety in some dogs. If your dog gets particularly upset when being left alone, this might also be a cause of their hyperactivity.

Many German Shepherds with behavior issues do not get enough activity. Studies have shown that dogs who are more sedentary in general will exhibit more behavior problems, much less a breed that is already hyper to begin with.

German Shepherds are pack animals and quickly look to establish a hierarchy when brought into their new homes. Similarly, they are also looking for boundaries and established behavioral norms. When training is inadequate, a German Shepherd may begin to show some dominance and other behavioral issues that fuel their hyperactivity and inability to calm down.

While not intentional, it is possible that owners are inadvertently encouraging hyper behavior in their dogs. During the training process, many will encourage their dog to be calm by providing them with food or positive attention. This, unfortunately, can backfire, as the dog associates being hyper with getting the reward they enjoy.

How To Calm Down Your German Shepherd

Now that you have some ideas on why your German Shepherd might be hyper, here are some things you can do to counteract this behavior and help promote a calmer demeanor.

A common training mistake is to reward the dog in order to be calm, but this can reinforce the wrong behavior. Instead, try ignoring the behavior so that they learn to stop asking for it.

A prime example is when an owner comes home from work, and the dog is hyper and jumping all over. By turning their back to the dog and walking away, the owner can disengage and the dog will learn that they will not get what they want (attention from their owner) when they are hyper.

Give Them A Job

Mental stimulation is so important for this breed in order to combat boredom. Giving a German Shepherd a job can then serve multiple purposes. It gives you an opportunity to train with your dog, establish rules and a hierarchy, as well as provide them with a purpose.

By redirecting their energy, the hyperactive behavior will gradually begin to subside, and the bond with your dog is strengthened.

When German Shepherds are puppies, this is particularly important, but playtime can be essential even as they grow up and mature. The interaction will help avoid boredom and helps them to focus that energy on appropriate behaviors instead of destructive or exuberant ones.

One example is to play “hide-and-seek” with your dog, where you hide in another room and call them to “find you.” This helps reinforce the “stay” and “come” commands but is also rewarding for the dog when they succeed. It forces them to use their brain and natural herding skills to seek out their owner and results in positive attention for positive behaviors.

Check out these great games you can play with your dog:

Insufficient exercise is one of the leading causes of hyperactivity in dogs, so it is important to prioritize this need in your dog’s life. Making time for a daily walk, a trip to the dog park, or fetch in the yard will help burn off some of their energy and promote a sense of calmness when done on a regular basis.

Chewing is a natural behavior, and many dogs can use it to relieve stress or redirect their energy—with German Shepherds being no different. Teaching them to chew on the right kind of toy can help mitigate other destructive behaviors. Other toys such as puzzles that challenge them to think, or even a piece of clothing with your scent on it, can also be calming for dogs.

Why Are German Shepherds So Hyper?

The short answer is that they were bred to have these traits. The current German Shepherd breed was a result of breeding focused on the beauty, intelligence, and athleticism of a working dog.

How Much Exercise Is Needed for My German Shepherd to Be Calm?

Every dog’s needs are different, but it is recommended that German Shepherds have a minimum of 2-hours of exercise daily.

Owning a German Shepherd can be very rewarding—but also has its challenges. Due to their high levels of athleticism and intelligence, keeping a German Shepherd physically and emotionally engaged can take a lot of work. But with the right training, routine, and stimulation, it is possible to encourage calm behavior in your dog—and decrease destructive or hyperactive tendencies.

Over time, the dog will both mature and learn the appropriate behaviors for your lifestyle, and this will only strengthen your bond with them and strengthen their loyalty to you and their family. Negative behavior won’t change overnight, but consistency will prevail in the end.