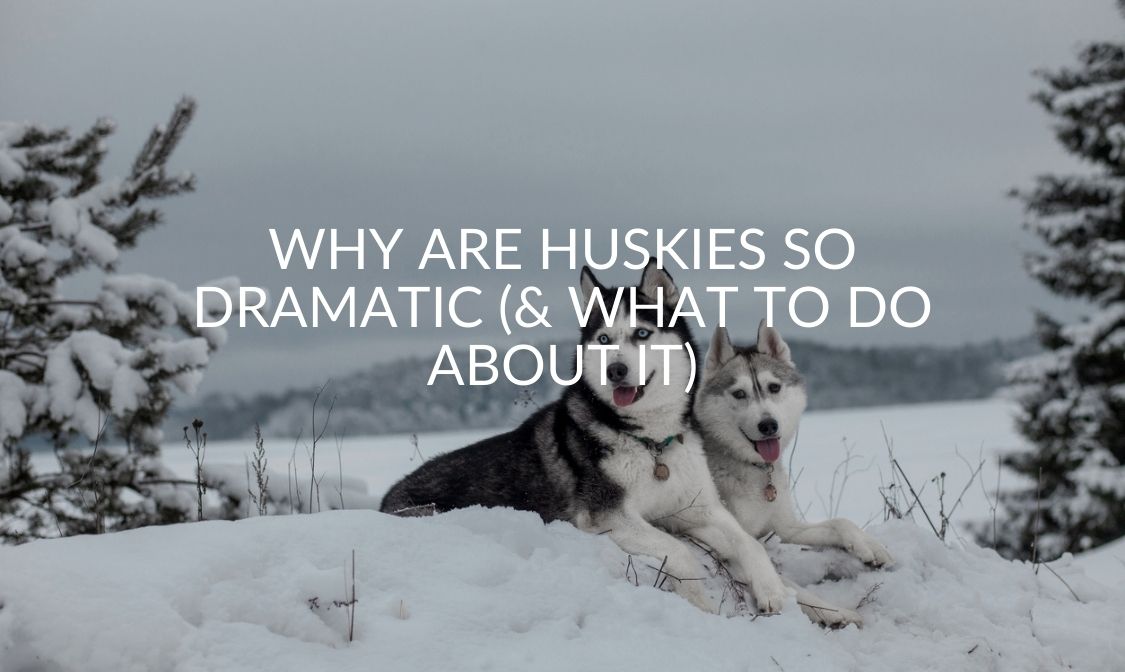 Those big, beautiful blue eyes look up at you and you’re a sucker for them every time. But your husky is always moody complete with whining, howling, and pacing. While you love your dog very much, this dramatic display is getting a little old.

Why are huskies so dramatic? These fluffy, gorgeous dogs tend to be very reactive to their environment along with being stubborn, independent, and playful. So, they like to express themselves when they’re unhappy or don’t like something. This is what many people interpret to be drama.

Why Are Huskies So Dramatic?

Although huskies are expressive and reactive, they often do this in a playful way. Understand that what you perceive as dramatic behavior may only be your interpretation. It’s not necessarily based on truth.

Scientists argue back-and-forth about whether dogs can express emotions in the way people classify them. But, we can get a basic understanding of a dog’s preferences. Some breeds are just more vocal about it and huskies take a place in the top 10 for this.

The core of most husky behavior is stubbornness, independence, and having a free spirit. So, if you command the dog to sit and it doesn’t feel like it, the drama starts. Oftentimes this is silliness and goofiness that accompanies howling, strange noises, staring, or even playing dead.

What Makes Them React?

When looking to quell and control certain behavior, it’s important to understand why your dog has melodramatic onsets. For huskies, there could be a number of reasons why they react in such away. These husky theater displays could happen because of:

Something in the dog’s immediate environment may trigger a reaction. Things like an emergency siren, car horn, doorbell, cooking timer, or baby crying can all bring on dramatic behavior. This is because huskies are always on the lookout; it’s in their DNA to do so. Any change in the status quo will create a situation where your husky feels the need to get vocal.

Also, keep in mind that they have excellent hearing. So, although there may not be any alert you can make out, it doesn’t mean your husky doesn’t. Even when in the house and a husky hears another dog barking outside, it will return the communication.

Because huskies tend to prefer their way at all times, when things don’t go the way they want, they drum up drama. This often comes in the form of crazy noises complete with howling, yowling, and sounds that are similar to talking. It’s important to understand that this is how huskies are and it doesn’t necessarily equate to what you interpret as drama.

Like most people and pets, they don’t like stress, tension, or uncomfortable situations. So, huskies will whine to let all in sundry know they don’t like it. This could be happening because your husky wants attention or is experiencing separation anxiety. In this latter case, their howling, yowling and apparent crying may accompany shaking, shivering, or other nervous behavior.

However, ensure there aren’t stressful goings-on in the household. Things like constant yelling, pervasive negativity, and children incessantly fighting will cause stress to a husky. So, keeping these at a minimum will help reduce your dog’s dramatic behavior.

But, sometimes, your husky could simply be expressing itself. Perhaps your dog likes to hear its own voice and has fun with the sounds it can make. But, chirping noises or howling in your direction could also mean the dog is signaling something. Maybe it wants some food, a treat, or playtime.

When this behavior also accompanies pacing or an expression of annoyance, it’s likely the dog wants your attention. There’s no harm in giving in, but you don’t want the dog to learn that behaving this way will get what it wants.

If you and your pooch have been together for many years, it could be picking up on your personality. There is some scientific research showing evidence that huskies take on the personas of their owners. So, you will have to evaluate yourself and your own behavior to see if this is a possibility.

What Are Signs Of Their Drama?

Understanding the signs of a husky’s drama will completely depend on the dog’s individual personality. But most of the time it’s going to be due to playfulness, goofiness, and/or silliness. However, there are some basic behaviors to look out for:

Howling, barking, and yowling are the most common ways huskies express themselves. Sometimes this may even sound like there’s a wolf in your living room. Remember, these dogs are direct descendants of actual wolves, so they will howl like it.

They also may do this to connect with a buddy outside, express fear, indicate anxiety, or in reaction to noise. If the howling is mild, they may be trying to tell you they’re happy and that they love you. This means you will have to learn to read your dog and the nuances of its barks, howls, and yowls.

(Find out why huskies are so vocal.)

Sometimes, your husky will make a sound you can’t classify. It’s just one of their many modes of vocalization. This is also true for chirping noises, where they almost sound like they’re trying to mimic the birds outside. It could be trying to notify you of something or attempting to train you to do what it wants. Yes, huskies do this.

Whining is very common for many huskies. This harkens back to their ancestral packs and their intercommunication methods.

When any of their vocalizations accompany something like pacing, it could be an indicator of being impatient or agitated. But, huskies could want to whine only because they feel like it.

Some huskies stare at their owners. Your dog may want to play, go for a walk or eat. But, if it’s staring in an intimidating way, the dog might ready itself for aggression.

There are some huskies that will play dead or fake an injury. They do this either attempting to avoid your command or they want to be a ham for attention.

In the event, your husky begins throwing tantrums, even when well trained, it is usually a sign of needing to go to the bathroom. But, your dog could also do this because they want their favorite toy. Either way, it’s important that you interpret and understand your dog so you can decipher what it wants.

How Can You Stop Your Husky Being So Dramatic?

Of course, if your husky’s acting up is becoming something of an issue, you’re going to have to begin controlling it. But, never punish or physically discipline your husky for what you define as dramatic behavior. This is who and what the dog is and does.

At the same time, don’t be a sucker; if the dog learns it can run roughshod over you by being dramatic, it will. You want them to obey your command, but don’t bribe them with treats either. It’s a delicate teetering of give-and-take.

The best way to bring your husky’s drama under control is dog training. Although you should begin basic techniques when you first bring the dog home, your husky needs advanced training.

Be the Pack Leader

You certainly want to be easygoing and relaxed around your pup, but it must also respect you and see you as the pack leader. Your husky should respect you at all times. The minute you lose your dog’s respect, it will stop obeying you and may even attempt to dominate.

So, when your dog’s drama strikes up, you must maintain a calm and firm demeanor. Don’t hit, abuse, act angry or rude either; this will not get the results you’re looking for. Be consistent and exercise your role as a leader with repetition and steadiness.

(Find out whether huskies get along with other dogs.)

A well-behaved husky is also one with good manners. This is because the dog learned how positive actions and behavior can glean treats, privileges, and other good things. Always reward quickly for a job well done. Do not give treats and snacks when the dog doesn’t obey or behaves poorly.

Make sure you give enough of your time to your dog every day. They love and crave attention at all times, it doesn’t matter if something else is occupying you. Even if it’s only for a few seconds, reassure the dog you’re paying attention.

When your husky acts up, start playing fetch or some other game. This will divert your dog’s attention to something else. You want to distract your dog from its whining by keeping it busy.

When Should You Worry About A Husky Being Dramatic?

Oftentimes, your husky’s dramatic behavior is nothing to worry about. Your dog is just playful, goofy, expressive, or communicating something. This will more than likely be a moment of amusement for your both.

The only time dramatic overtones should raise concern is if their barking, staring or other noises accompany aggression or illness. If the dog seems to like it’s about to attack someone, then something else is going on.

First, take it to the vet to ensure the dog doesn’t have some medical issue. Then, make sure your husky is getting enough positive attention and exercise at home along with proper training. If this worrying type of drama persists, take your dog to a behavioral specialist.

Huskies are big furry babies who love to play, goof and express themselves. So, what we may interpret as being dramatic is simply the dog’s mode of being. “Dramatic” is a human conception, it doesn’t necessarily define a husky’s behavior or mood.

Dogs, like people, need an outlet for self-expression and huskies are a more vocal breed. There are methods and means in which to control this. But, it won’t hurt to allow a little drama when they want to be vocal. However, you do want to curb excesses and you don’t want the dog to learn it will get its way each time it puts on a show.

Remember, you are the leader of the pack; the alpha dog, so to speak. So, you must assert your status for the husky to fall in line. But, at the same time, you have to let your dog be itself. Although this will be a balancing act, once you reach a consensus, you should be able to reduce your husky’s dramatic bouts.