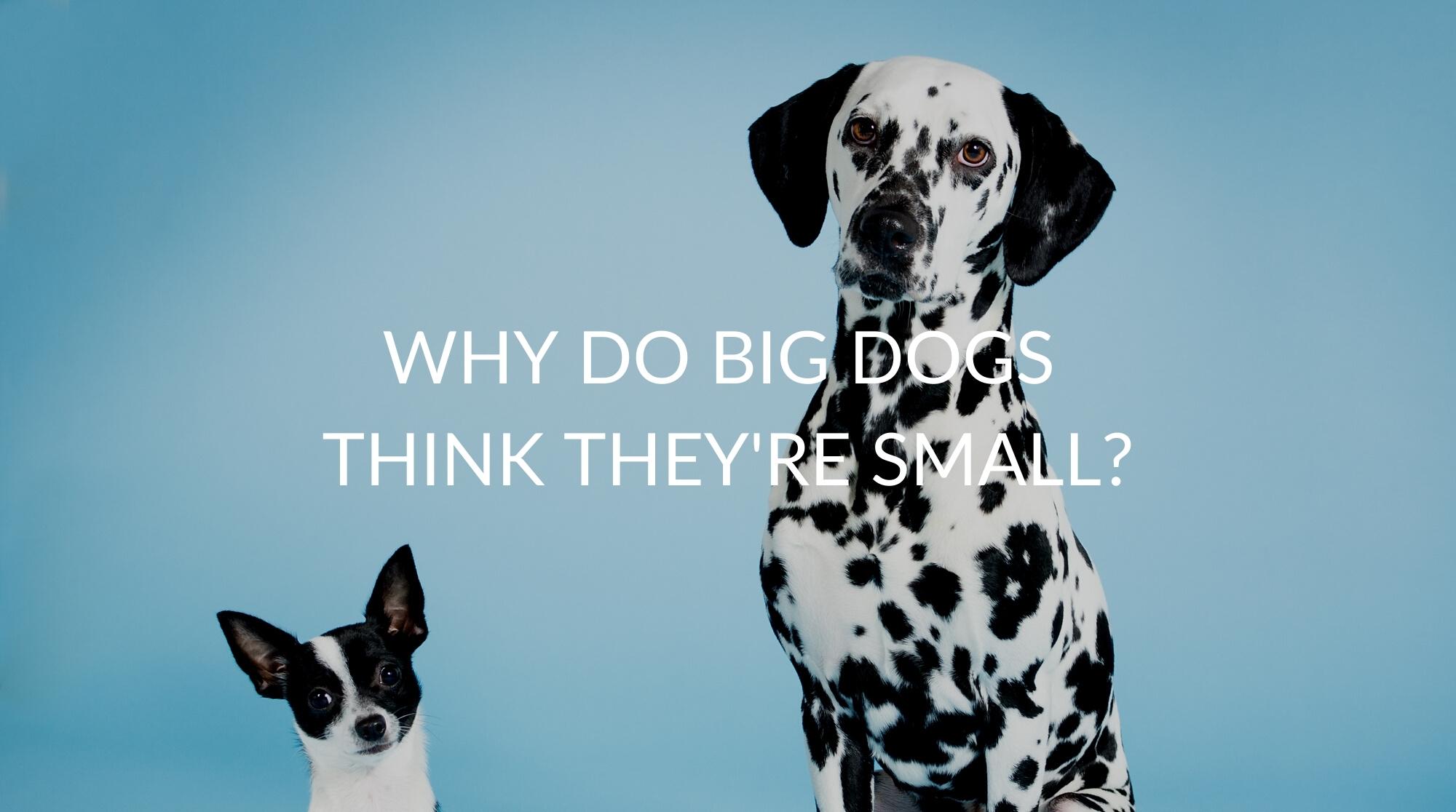 If you have a monster-sized dog, like a Rottweiler, you may notice it try to fit in tiny places. This is actually a very common thing for many large pooches. So, why do big dogs think they’re small? First, it’s essential to understand it’s not that your dog thinks it’s small; the dog may be unaware of its size.

This will be particularly true if your big dog recently exited puppyhood. But, if you have a dog that knows its size yet wants to be small, there could be other issues going on. This is usually one of two things: your dog wants attention, or it could be the preferences and personality of your pooch.

Do Dogs Realize How Big They Are?

According to research published in Animal Cognition in December of 2019, dogs do have some concept of their size. The study determined this by comparing various sizes of dogs and their ability to understand what sized openings they can fit into.

They gave them three size doors or openings in which to walk through. Almost all dogs went through apertures they knew they could fit in. While it’s not definitive proof, it does suggest that dogs do have the ability to gauge their size. But, this may only indicate their relationship to being able to fit through an opening.

That said, it doesn’t necessarily mean every dog is aware of its size. For example, there are some big dogs that will try to make their way onto a person’s lap for which they definitely can’t fit. No matter how old the dog gets, it will never seem to grow out of doing this or realize how big they are in relationship to the person.

It’s difficult to know exactly what a dog thinks. However, it does seem that some dogs either think they’re small or they want to be small. When it’s a matter of wanting to be small, this is often the case when there’s a big dog in the same house with a baby or another small pet, like a cat.

If the dog notices its owner paying more attention to other, smaller creatures, they begin acting in a similar fashion. So, it’s likely they’re looking for attention rather than thinking they’re small. Alternatively, the dog may be one of those oblivious to how large it is.

The best way to decipher what’s going on in your big dog’s head is to spend some time with and observe it. When you notice the dog trying to be smaller than it is, take note of the following:

What Is the Reason for Big Dogs Thinking They’re Small?

If a dog does think it’s small, it’s probably because the dog probably doesn’t yet realize it’s not a puppy anymore. When dogs are small and little, they can fit anywhere, and there’s no evidence to suggest they’re aware of the act of growing.

So, if they’re feeling particularly cuddly or playful, they may not realize they’re too big. But, as mentioned earlier, it could be a matter of simply wanting to be small. This could be due to the dog feeling as if the smaller creatures in the house get more attention.

And yet, there are some big dogs that only want to be lap pets. The dog is very aware of how big it is, but they simply want to snuggle on your lap. They don’t care if they don’t fit. Some pooches are super big babies like that.

Is There a Way to Train Dogs to Understand Their Size?

There is evidence of being able to teach a dog about body awareness, but there isn’t any particular training technique. Experience is the best teacher, and, at some point, the dog will realize its size. That said, you can talk to your trainer about developing body awareness with agility exercises.

Is Something Psychologically Wrong When the Dog Wants to Fit In Places That Are Too Small?

No, there’s nothing psychologically wrong with your dog. Now, if your dog constantly cowers in a small corner or box that accompanies the appearance of fear and shaking, there may be something wrong. In this case, you should take your precious pup to a behavioral specialist.

Will Dogs Grow Out of Thinking They’re Smaller Than They Are?

Some dogs will stop pretending they’re smaller than they are, and yet others will continue the act well into elderly age. It will depend on the dog, its personality, and how they like to go about doing things. It could be as simple as being part of who the pooch is.

Are There Any Studies That Evaluate a Dog’s Ability to Understand Its Size?

There are a handful of studies done recently that researched a dog’s ability to see its body as an obstacle. One such study from Scientific Reports in February of 2021 provides evidence for such awareness. However, aside from the study mentioned earlier, this is a slow-growing field of study.

As you can see, big dogs don’t necessarily believe or think they’re small. They may not grasp or be aware of how big they are because they are still transitioning out of puppyhood. Or the dog could be aware of its size, but it enjoys being snug in narrow spaces. Regardless of the reasons behind it, it’s always a cute scene.