Boston terriers fart a lot. This characteristic is tied to their brachycephalic face. Boston’s have a short snout that allows a lot of air into the throat quickly. The air gets swallowed and results in an over-abundance of flatulence. Add that to other causes of farting in all dog breeds, and you have a perfect storm. We’ll start this article by looking more in-depth into the reasons Boston terriers fart so much. Then, we’ll talk about how you can reduce your pup’s flatulence. Finally, we’ll look at some general dog health info to round things out.

Why Do Boston Terriers Fart So Much?

Dogs with brachycephalic faces have short noses on wide heads. They tend to breathe through their mouths much more than their noses. That means a lot of air gets swallowed and ends up in the stomach. From there, it turns into gas the dog has to expel.

Their face shape is not the only reason why a Boston terrier will fart a lot, though. Let’s look at reasons why dogs fart, in general.

Some dogs eat very fast. The faster a dog eats, the more air he will take in. If your Boston is prone to scarfing his meals, you should do something about it. There are ways to slow his eating down, which we’ll get to in a minute. Dogs who gobble food very quickly swallow air along with the food. The air will often stay with the food as it moves through the digestive tract. Once it reaches the intestines, it has to be expelled as flatulence.

Your Boston may have some food allergies and sensitivities. Just as with humans, dogs tend to get gassy when they eat something their bodies aren’t happy about. It’s part of the body’s response to an intolerance or a reaction to an allergy.

Many dogs have flatulence when their food is changed. Bodies get used to processing certain types of food. If the food is changed out, there is usually a period of adjustment when the body is learning how to process the new ingredients. The good news is, it’s usually temporary.

Eating Something He Shouldn’t

Sometimes dogs get a hold of things they shouldn’t eat. It could be an item, a toy, a plant, or anything else within reach. That can trigger a flatulence response as his body tries to figure out what to do with it. Human food often causes farting in dogs. Human food, especially junk food, has a lot of ingredients that aren’t good for the digestive tract. Feeding your Boston French fries, pizza, chips, and other food he shouldn’t have can wreak havoc on his digestive system. He will likely fart a lot and could even experience issues with diarrhea. How Can You Stop Your Boston Terrier Farting So Much?

All dogs fart. Boston terriers are known to fart more than many other breeds of dog, though. While you’re going to have to tolerate some flatulence, you can cut down on some of it with a few simple steps. Here are some ways to combat Boston terrier farting.

When dogs eat too fast, it causes a lot of gas. These dogs fart a lot more than average dogs do. If your Boston has this problem, get him a dog slow feeder. A dog slow feeder is a specially designed bowl that has pegs and grooves to separate pieces of food into different spaces. Those spaces are meant to make your dog work harder to get the food out of the bowl. It forces him to slow down his pace. Various shapes, sizes, and colors are available for these kinds of bowls.

Test for Food Allergies and Avoid

If you’re having trouble pinpointing what causes your Boston to fart so much, it could be he has food allergies. Something in his food dish could be the culprit. Try to figure out what he’s having the flatulence reaction to. It may be you just need to pay close attention to what he’s eating to figure out what he’s allergic to. If you can identify it on your own, simply start avoiding that ingredient. Grains are often to blame for causing excessive gas in dogs. Check out the ingredient list on your dog’s food bag. If it’s chocked full of grains, you should switch to something higher in protein. Some grains are ok. Your Boston’s body can’t effectively digest large amounts of grain, though. If you’re unable to identify what food your dog is allergic to, seek the help of your vet. Veterinarians can perform allergy tests on your pup, just like doctors can for people. Built-up gas in your dog’s digestive tract is often uncomfortable for him. Eating foods he’s allergic to could be causing other symptoms, as well. It’s in his best interest to find out what he’s allergic to.

When you change your dog’s food, you need to do it slowly. His body needs time to adjust to the new ingredients. It’s best to start by mixing the new food in with the old food. Little by little, you can increase the amount of the new food you mix in. The flatulence response should decrease as your pup gets used to the new food. You can give him more of the new food based on his farting response. Or you can increase slowly every week until he’s only getting the new food. Should you find the flatulence gets bad and doesn’t go away, you should try a different option. The response should fade as your Boston gets used to the change. It may be an indicator of an allergy or intolerance.

Don’t leave items on the floor that your Boston could ingest. Many dogs scoop up items into their mouths when they’re left unattended on the floor. Pay attention to what’s within his reach. It’s especially important with a young dog who’s curious and still learning about his environment. Human food is usually too rich for a dog’s tummy. We eat things their bodies don’t handle very well. Your pup will likely have digestive issues if you feed him too much human food. Sodium is especially rough for dogs’ bodies. Grains are hard for dogs’ bodies to digest. Foods high in fat, sodium, cholesterol, and sugar shouldn’t ever be given to your dog.

Exercise helps with dog flatulence. The increase in their heart rate helps boost digestion, making your dog’s system work more efficiently. Allowing your dog time to run around in the yard, taking your pup to the dog park, and taking him for walks will help cut down on farting. The other part of this is playtime means more opportunities to poop. This is important because dogs that are forced to hold poop in have more gas build-up inside their bodies. That results in more flatulence. Make sure you’re letting your dog out several times a day to prevent unnecessary gas build-up. 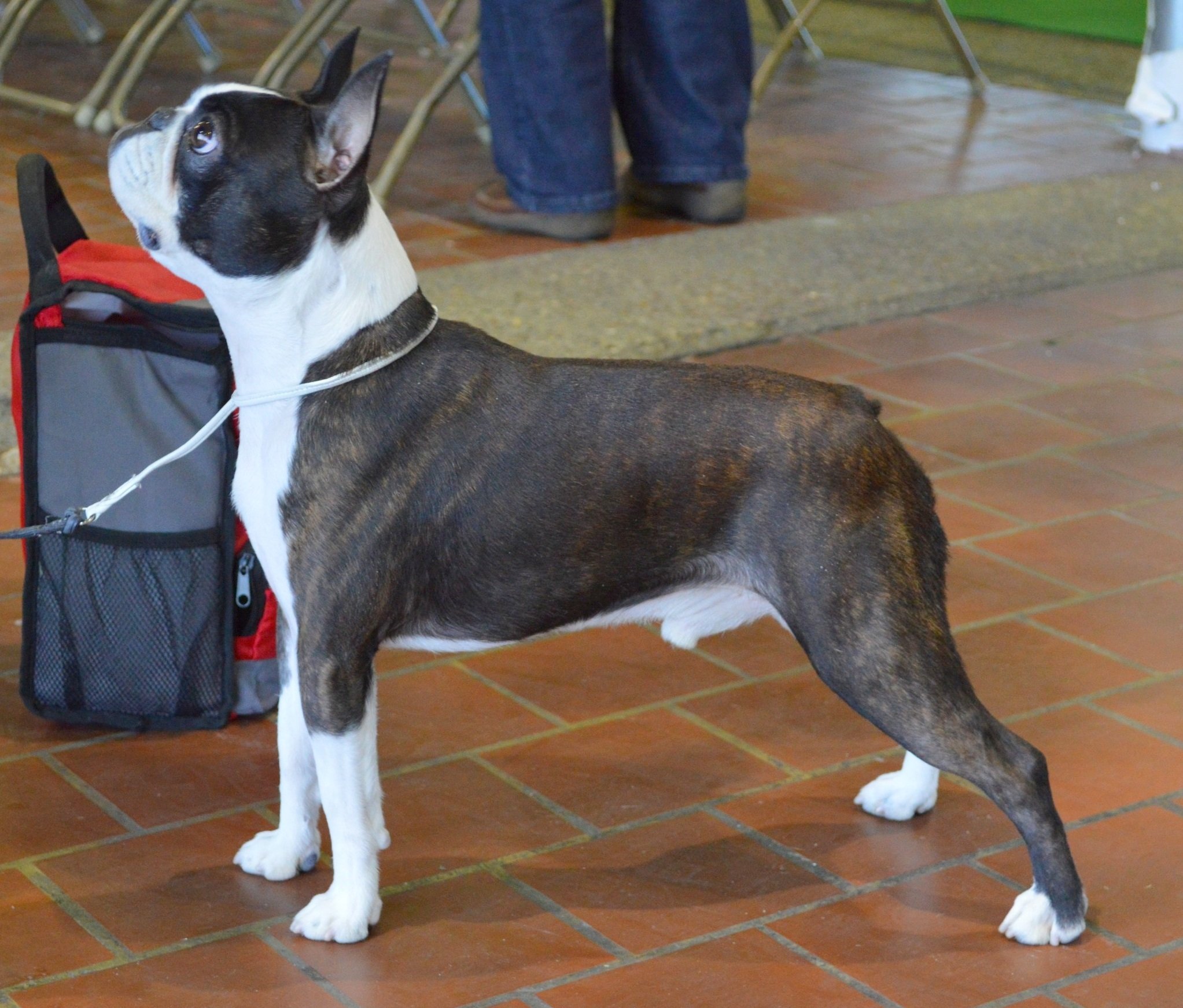 When Can Farting Too Much Be a Sign of a Problem?

Boston terriers fart a lot but it doesn’t mean there’s not a problem if it becomes excessive. The key is to pay attention to changes. Look for increases in the frequency of farting. The presence of diarrhea or discharge along with farting may indicate a problem. Also, changes in the sound or smell of farts can indicate the existence of an issue.

Excessive farting can be a sign that parasites have infested your Boston’s digestive tract. These are dangerous because they cause disease, can infect other parts of the body, and some can even infect humans. Parasites are often very contagious so they spread from animal to animal through feces and other substances with ease. Your dog will have to be treated with prescription medication if there is a parasite problem.

If you notice your Boston terrier’s farts are combined with a lot of bloat, this could indicate there’s a problem. Bloat is also called volvulus and gastric dilation sometimes. It’s a very serious condition that’s caused by the stomach twisting around. Gas gets trapped in the stomach. It’s quite painful for your dog. Bloat can cause your dog to have difficulty expelling gas. It can also cause him to fart a lot more. Often dogs with bloat act lethargic. You can tell they don’t feel well. They can have trouble breathing, too, often gasping for air. Bloat is common in dogs that eat fast, eat a diet of only dry food, eat only once a day, and have lean body types. Pups whose parents were prone to bloat will likely also be prone to bloat.

Persistent farting can be a sign of irritable bowel syndrome, or IBS. IBS is often uncomfortable and even painful when it’s more severe. IBS is characterized by a group of symptoms that occur at the same time. Your pup will be bloated and gassy, experience cramping, have constipation with diarrhea in between, and experience abdominal pain. If IBS exists for your Boston, the vet will put him on medication and likely give you tips for how to prevent IBS symptoms. You may also be presented with some food alternatives for your furry friend. Some prescription foods are easier for dogs to digest. They help with the prevention of IBS.

Want To Train Your Boston Terrier With Peace Of Mind?

If you haven’t trained your Boston Terrier properly, then this is the perfect time to start. Whatever bad behavior your shepherd has, whether it’s barking at night or other bad behaviors, using the right training program is the key to having an obedient and happy pup. The training program I love and highly recommend is Brain Training For Dogs. With Brain Training For Dogs you’ll save yourself a ton of time and effort. Instead of banging your head against the wall trying to figure out why your dog won’t listen, you’ll follow a path that has been tried, tested, and most importantly, that’s given proven results. Not to mention the fact, you’ll be able to fit the course around your schedule, not fit your schedule around a trainer or obedience class. So instead of worrying about whether they’re going to be well-behaved or not, you’ll only have to worry about how much fun you’ll have with them! And in most cases it’s still going to be: Just imagine how great it will feel to finally be able to trust your Boston Terrier completely and never worry whether they’ll be naughty or not. Instead, you’ll have the peace of mind that you have a well-behaved pup, and the boundaries you set for them, will always be there, EVEN IF YOU’RE NOT. And the best part is it also has a 60-day money-back guarantee! So there’s no reason not to give Brain Training For Dogs a try! So if you’re tired of your dog’s bad behavior, or how they react around other people and pooches, then give it a try! You’ll be amazed by the results! (You can also check out a full review here, to learn exactly what the course has to offer!)

Farting is a part of Boston terrier ownership. This type of dog has a skull shape that allows lots of air to get swallowed, thus causing more flatulence than average dogs have. You can cut down on some farting by making sure your pup eats slower, changing out foods they’re allergic to or intolerant of, not feeding them human food, and making sure they get enough exercise. Don’t ignore a flatulence problem, though. Flatulence that changes somehow may be indicative of a problem. If it seems your Boston is farting too much or can’t fart at all, reach out to your vet for help.