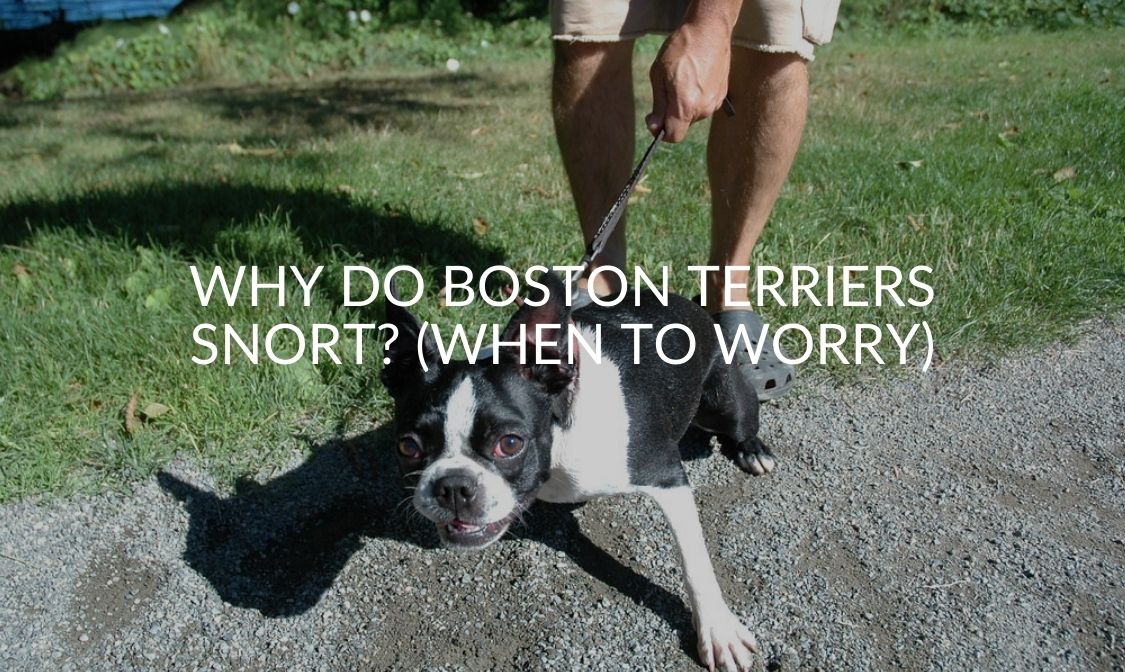 Boston terriers snort because their throats have small palates that spasm, causing what’s known as inverted or reverse sneezes. It will sound like your Boston is honking or wheezing. It’s, essentially, caused by a gag reflex. Bostons are brachycephalic, which means their heads are short and wide. This head shape adds to their snorting condition.

It’s not uncommon for a Boston terrier to snort. In the absence of other indicators, it doesn’t mean there’s anything wrong with your Boston. In this article, we’re going to talk about what happens when your Boston snorts, some things you can try to decrease the frequency of snorting episodes, and how to know if there’s something concerning going on. So, let’s get started!

Why Do Boston Terriers Snort?

We mentioned above that you hear your Boston snort when he experiences an inverted sneeze. When the palate in his throat spasms, he sneezes inward rather than outward. Sometimes these dogs can get stuck in a pattern of these reverse sneezes.

Boston terriers are triggered more easily to sneeze inwardly because of the shape of their skulls. The skull is short and broad. Their snouts aren’t very long and are wide. It allows allergens, other things in the air, and moisture into your dog’s snout, at a pace where it reaches the throat quickly and all at once. That can trigger the sneeze reaction fast.

Some common exposures can easily trigger a Boston terrier to have a snorting episode. Here’s a list of some things to look out for:

Should I Respond to a Snorting Fit?

Boston owners often ask if they should react to their dogs’ snorting fits. It’s one thing if they have a couple of inverted sneezes, and then they’re done. It’s another if the fit continues, and it may be impeding your pup’s ability to breathe. Keep reading to find out what you can do if you feel you need to intervene.

How to Stop Your Boston Terrier Snorting

Inevitably, you’ll need to help your Boston stop snorting at some point. Let’s look at some proactive things you can do to avoid future snorting episodes, as well as some reactive options for when your pup can’t stop.

Allergens are higher at certain times of the year. If your Boston is especially prone to fits of reverse sneezing, keep him inside more when things like pollen and other allergens are peaking.

Eating and drinking too fast often leads to snorting fits. Purchase bowls that force your dog to slow down when he’s having his meals. You should also supervise his mealtimes.

Make sure his collar isn’t too tight. When the collar is too tight, any small tug on the leash can send your Boston into a snorting episode. Look for an alternative if the collar seems too tight. For instance, you can go with a harness rather than a collar.

Avoid wearing heavy perfumes or colognes when you’re around your Boston terrier. Strong smells cause reactions in the nostrils and changes in breathing patterns. Your pretty perfume can cause a lot of discomfort for your Boston.

Steps for Stopping a Snorting Episode

For the most part, snorting episodes will stop on their own. They may sound scary, but most of the time they’re harmless. Sometimes these episodes will get excessive, though, and it’s best if you intervene and try to stop them. Here are some methods for doing that.

Always use caution when you’re trying to help your furry friend. Sometimes they may take our attempts at help as threats. Make sure you take every step you can to reassure your pup. Then, he won’t feel scared or threatened. When Is Snorting the Sign of Something More Serious?

Most Boston terrier snorting fits aren’t anything to be concerned about. It’s a normal part of owning a Boston. However, there are times when something more is going on. It’s important to know how to determine when you need to seek the help of a vet. Let’s look at some instances where a trip to the vet may be warranted.

Boston terriers shouldn’t have snorting episodes every day, all day. If yours does, take him to the vet. They may run some tests to find out if there is an allergy problem with your dog. The vet might prescribe medication to help your pup breathe better. They may also help you with tips for reducing the number of sneezing episodes your dog experiences.

Snorting Episodes Go On Too Long

Generally, Boston terrier sneezing episodes should only last about 20 seconds. Occasionally, they’ll be longer than that. If you notice your Boston having snorting fits that last for a minute or longer often, contact your vet.

It might be helpful for you to record a few of these fits to show the vet. This will allow your vet to see the episodes as they’re occurring rather than working from a verbal description only. Then, they can tell you if it’s concerning or if it’s just par for the course with a Boston.

Triggers of Snorting Episodes Are Unknown

Most Boston owners can pinpoint the triggers for their dogs’ sneezing fits. If you can’t, reach out to your vet and get help. The likely cause is allergies. Your vet can run tests to confirm an allergy diagnosis and prescribe medication accordingly.

The more you can do for reducing the triggers of snorting fits, the better your Boston will feel. Again, it’s not unhealthy for Boston terriers to have these episodes. You should prevent them if you can, though.

What Health Issues Do Boston Terriers Have?

Boston terriers are typically healthy dogs. As with most dog breeds, some common health issues can arise. Here’s a brief look at the most common concerns. Most of these are easy to care for. Don’t avoid Bostons with health issues. Just be mindful of what caring for them will entail. That way, you’re making a good choice for yourself, and the dog.

A Boston with the brachycephalic syndrome has three indicators–an elongated soft palate, stenotic nares, and everted laryngeal saccules. These indicators cause problems with respiratory function.  There may also be a narrowed windpipe that makes breathing more difficult for these pups.

Small dogs are at risk for patellar luxation, a dislocation of the kneecap. The kneecap can slip out of place during activities like running, playing, and jumping. Most of the time, it will slide back into place on its own. More serious patellar luxation conditions will require vet intervention.

A Boston terrier’s eyes protrude from the face. It means they’re more susceptible to injury. Boston’s can experience scratches to the eye, many irritations, and conjunctivitis. If you notice puffiness, redness, or tearing from your Boston’s eyes, contact your vet.

Epilepsy is inherited from some Boston terrier parents. Most pups will exhibit the presence of epilepsy before the age of three. A diagnosis of epilepsy is not a death sentence for your Boston. In most cases, these dogs live long happy lives with your help and prescription medication from your vet.

Boston terriers sometimes suffer from defects of the spine. The corkscrew tail these and other dogs have can be indicative of hemivertebrae. There may be curves in other parts of the spine, which can cause a lot of pain, incontinence, and even paralysis.

Hemivertebrae can’t be fixed. Be vigilant and pay attention when you’re looking for a Boston from a breeder. Look out for wobbliness, weakness in the hind end, or signs of pain in puppies you’re considering.

This breed is prone to skin allergies. Atopy, as it’s technically referred to, causes chewing, scratching, licking, and rubbing. The skin will look red and irritated sometimes. You may also notice a rash.

Boston terriers often have allergies to pollen, plants, cleaners, and even foods. In some cases, you can simply keep the allergen out of your pup’s environment. If that’s not possible, talk to your vet about getting medication to help your pup live a more comfortable life.

While somewhat rare, Boston terriers are deaf in one or both ears sometimes. You’ll notice they don’t turn your way when you speak to them or respond to audible stimulants in their immediate vicinity. Those could be signs your Boston is either deaf or hearing-impaired.

Do All Boston Terriers Snort?

Boston terriers all snort, to some degree. It’s normal and usually doesn’t indicate any existence of serious concerns. Some Bostons snort more than others. It’s up to you to determine what your Boston’s triggers are for his snorting fits. Then, you can address them accordingly.

Want To Train Your Boston Terrier With Peace Of Mind?

If you haven’t trained your Boston Terrier properly, then this is the perfect time to start. Whatever bad behavior your shepherd has, whether it’s barking at night or other bad behaviors, using the right training program is the key to having an obedient and happy pup.

Just imagine how great it will feel to finally be able to trust your Boston Terrier completely and never worry whether they’ll be naughty or not. Instead, you’ll have the peace of mind that you have a well-behaved pup, and the boundaries you set for them, will always be there, EVEN IF YOU’RE NOT. Boston terriers snort because they have an inverted sneeze response brought on by their brachycephalic head shape and reactions to what they inhale. Don’t panic when snorting fits present. While there can be cause for concern, most of the time, there’s not. If your Boston has difficulty breathing, reach out to your vet. In the meantime, stay calm, follow the steps above, and love your Boston for who he is.