German Shepherds are social canines who follow their human companions for many reasons. Although everyone loves to be cherished by their pet, it can get tiresome when your German Shepherd is always underfoot!

Luckily, there are plenty of ways to solve a velcro dog’s clingy behavior. By training your dog and giving them plenty of attention, your German Shepherd will not feel any need to follow you.

Why Is My German Shepherd Following Me Everywhere?

There are many reasons German Shepherds follow their humans everywhere, like attention-seeking, hunger, and separation anxiety. Social anxiety is a key reason that many dogs follow their owners.

As an affectionate and loyal dog, most of the German Shepherd’s following behaviors are because of the close relationships with their human companions.

German Shepherd’s have a pack-mentality. In the German Shepherd’s eyes, you are their leader, which means they will always follow you! Being human is not the only reason that you have established yourself as alpha. You are also their paternal figure!

German Shepherds form close bonds with their humans, often resulting in separation anxiety. Following you everywhere is your German Shepherd’s way of showing their anxiousness. In some cases, German Shepherds may break free from their yard during the day to “search” for their companions.

Causes of clinginess include:

Biological needs are a common reason your German Shepherd might follow you everywhere. Bathroom breaks and hunger are the most common needs, but your dog may need exercise too.

You are the most exciting thing in your German Shepherd’s world, which is why they always have their nose in your business. A nosy dog may follow you around to observe what you are doing. When a dog is interested in what you are doing, they will linger around until you two are on to the next task!

If you adopted your German Shepherd from a shelter, they might have previously been a working dog. Working dogs dedicate themselves to staying beside their humans as a variety of services and professional work. Working German Shepherds may even grow unfulfilled when apart from their humans.

How To Stop Your German Shepherd From Following You Around

After discovering why your dog is following you, it is easier to fix their following behavior!

Baby gates are a cheap solution to separate you from your clingy dog. However, this strategy can only work if your German Shepherd is well-behaved. A misbehaved dog will jump the gate, which makes the method purposeless.

The only way your dog will learn to behave well is by establishing strict boundaries.

The strict boundaries include:

For this method to work, you must enforce these boundaries at all times and reward your pup for performing the right behaviors on their own. 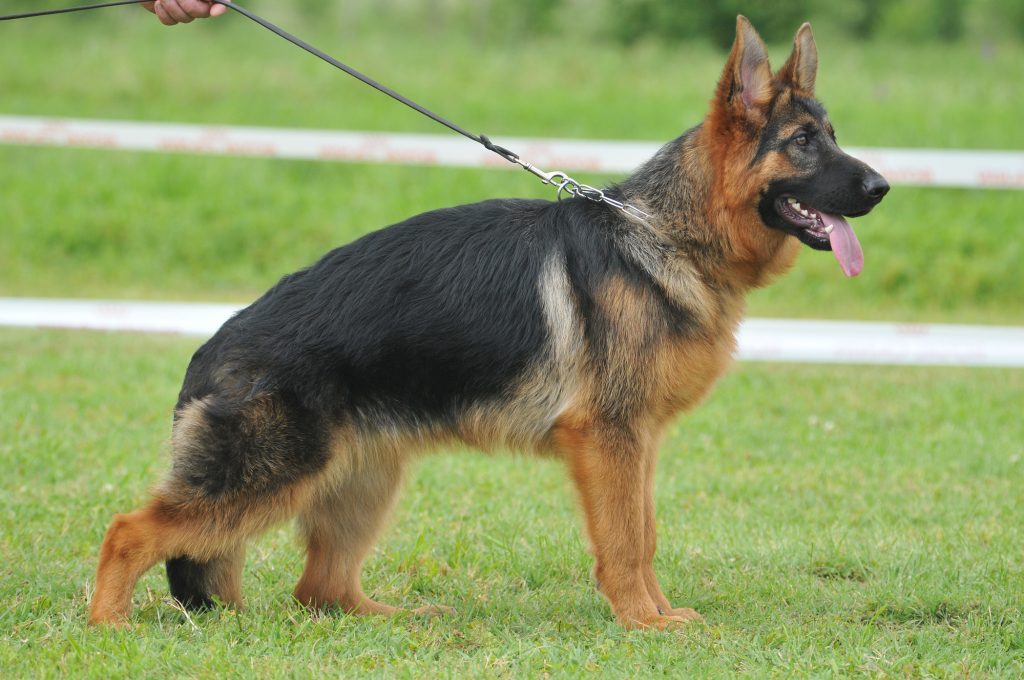 Should You Let Your German Shepherd Follow you Around? Or Limit It?

Letting your German Shepherd follow you around is okay in moderation. When a German Shepherd becomes too attached, they can become depressed when their humans are not around.

To prevent social anxiety and depression from happening, you must use discretion to limit the time you spend with your dog. It is also important to reinforce positive behavior and set boundaries on intolerable behavior.

When your German Shepherd gives you space and acts independently, give them praise.

German Shepherds can be clingy with their human companions because they form close relationships. It is up to you to decide what is appropriate and what is not. If you love cuddles and want your dog to follow you around, that is up to you!

Remember that German Shepherds are naturally social animals, and they need plenty of social stimulation. While using discretion to limit the time they follow you, you must also fulfill their needs.

When you see your German Shepherd performing tasks individually without your guidance, give them praise.

Routines set clear-cut expectations for your German Shepherd. Timeliness is important for implementing a schedule which means you must follow the same times each day. Among many other things, your daily schedule will include taking your dog out to potty, socializing them, and feeding them.

German Shepherds are highly intelligent dogs which means they are fully aware of any routine you set for them. When you establish a routine, your German Shepherd will not follow you around the house and beg for food or attention because they already know when you will feed them!

The most important part of setting routines is following through with them daily. If you do not follow through with your routine, you will cause your beloved German Shepherd to become confused.

Do Not Tolerate Table Lingering

For instance, a lingering dog stays at your feet while eating and as you work from home. Lingering dogs will follow you into the bathroom and stay underfoot as you change clothes (you may have tripped over your German Shepherd before).

Do Not Allow Begging

Whether your German Shepherd follows you in the kitchen while prepping dinner or around the house between meals, begging should never be tolerated. Your dog’s feeding schedule is an important part of their daily routine.

As your furry friend’s main provider, they rely on you for a stable, stress-free life. Follow the same feeding routine each day, so your dog never begs for food.

Furthermore, ignore gluttonous begging to prove you are in charge of your dog’s feeding schedule. Even if your German Shepherd follows you around and begs for food, ignore their behavior until they inevitably retire to their bed.

Why Does My German Shepherd Follow Me Everywhere Suddenly?

Why Does My German Shepherd Follow Me to The Bathroom?

German Shepherds are very social dogs who love following their human companions around their homes. These dogs are smart, and they use that to their advantage as their trail behind their humans.

There are many reasons why German Shepherds follow their humans around the house, like begging for food and attention. German Shepherds also love attention and may seek it out when they feel socially deprived.

Letting your German Shepherd follow you around is not necessarily a bad thing. However, you should only let your dog do so in moderation. Limit bad behavior by giving positive praise and setting boundaries on negative behavior.