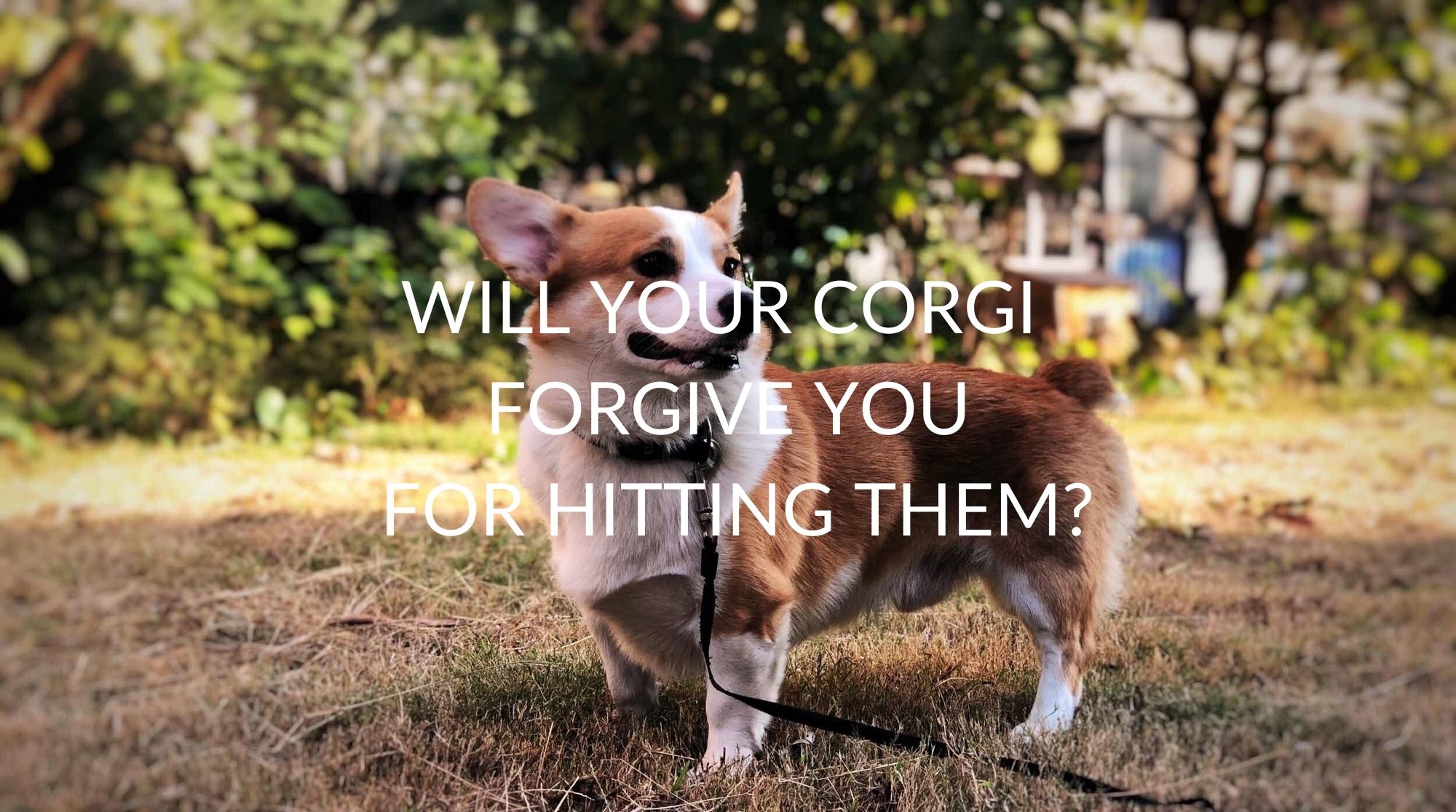 We love our Corgis! As most of us treat our Corgis as a part of our family, we spend so much time with them, developing unique connections to a point where we romanticize them and their every little action.

When we hit our Corgis accidentally or lash out at them due to frustration, we may wonder whether they can forgive us. While dogs indeed remember and feel, they don’t think the same way that people do. You may like to believe that your dog forgives you for beating them, but a dog is unlikely to understand what forgiveness even means.

Do Corgis Remember When You Hurt Them?

Corgis don’t recall every time you strike them, but they will react in a way that makes it appear as if they do. How true that is is a question of discussion that takes into account the passage of time.

Claudia Fugazza claims that her research at the Eötvös Loránd University in Budapest entitled, Family Dog Project, proves corgis have memory and can recall events throughout their life. That is, they are able to recall a person’s conduct toward them.

However, that recollection is short-lived, lasting about an hour or two. So, if a dog recalls when you hurt it and needs to forgive you for hurting it, it will last little more than an hour.

We also know from Pavlov’s studies of stimulus-response that corgis have greater associative memory than episodic memories. A corgi links a stimulus (a ringing bell) with a reward in this way (being fed). The link is so strong that whether or not the anticipated reward (meal) is available, the reaction (salivating) will occur anytime the bell sounds.

For this to happen, the stimulus (being hit by you) must be repeated over a long period of time. Even so, the corgi is unlikely to recall you hitting it. It will connect anything that always happens at the same time as the hitting, such as your voice tone or you picking up a rolled-up newspaper. It links the stimuli to a fear or anger response (the fight/flight mode).

Do Corgis Understand When You Apologize?

Don’t you wish you could go into a corgi’s head and figure out the solutions to questions like this? The human brain’s complicated workings are still a mystery to us. How much do we really know about a corgi’s brain?

Take one of my dogs, for example.  When we play, he gets carried away and nips me a little too hard. When I cry, “Hey!” he comes to a halt, lays down, rests his head on his paws, and makes the most pitiful whining sound. He seemed to be apologizing to me! Right?

Let’s pretend I have a bad temper. I whack my corgi when it leaps on me. I can be a little too hard on it at times. I say, “Oh, honey, I’m sorry,” with a sad tenderness. I massage its ears, rub its stomach, and promise that I would never, ever do that to it again. My corgi wags its tail and kisses my palm as if it understands my apologies. Right?

In both cases, the popular and appealing conclusion is incorrect. Depending on its answer, my corgi learns incentives (my attention and continuing play). When I shout, “Hey!” the stimulus is linked to the rewards, and the stimulus-response (whimpering) persists even if no nipping occurs. Yes, I can shout “Hey!” and it will lay down and whimper for no apparent reason. It makes no difference if you apologize.

To humans, hitting a corgi is a horrific event, but for the corgi, it goes in one ear and out the other. The corgi acts the way it does in reaction to my attention and tone of speech, not because it accepts my apologies. By leaping on me, it’s getting what it wanted: my attention. Second, my voice’s soothing serenity is reassuring to my corgi.

Can A Corgi Forgive You For Hitting It?

You’re probably starting to see that what we want to imagine about our corgis and what actually happens to them are two very different things. Their memories operate differently, and their actions aren’t always what they appear to be.

To forgive, I have to say that you hurt me. If you haven’t done anything to me, why would I need to forgive you? To be hurt, I need to remember the time or times in my life when I was hurt. It hurt me when you didn’t say hello last week. “I’m sorry.” I don’t hold a grudge against you.

After an hour, a corgi can’t remember being hurt anymore. Suppose you say that a corgi has what it takes to forgive someone for an hour. It won’t come back a week later and say, “I’m just going to forgive you for hitting me last week.” It doesn’t know what forgiveness is, and it has no reason to give it to anyone else.

How Can I Make My Corgi Forgive Me?

If everything I’ve talked about up until now is true, you can’t make a corgi forgive you. You can’t make it do something it doesn’t have the capability to do and doesn’t understand.

“That dog is never going to forgive him for throwing those rocks,” says a neighbor. Is that true? Another year goes by, and the dog doesn’t snarl or bark at the man. The next-door neighbor says, “I was wrong. Guess he was able to forgive him after all. “What is the explanation for this?

However, there is a time after two years when the dog stops barking, so it is tempting to say the dog forgave the man in time. The reality is the associative memory of the man being hit by rocks, and an aggressively defensive response has dulled over time. This instinct has faded over time. The dog hasn’t forgiven anyone, but it has just forgotten the connection between the two things.

Perhaps it’s easier to say that time heals all wounds.